Matchup of unbeatens in Buffalo, of all places 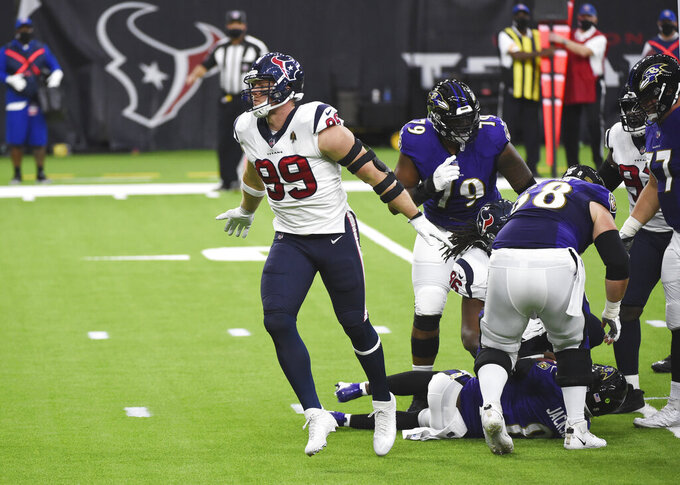 Not since the days of Bruce Smith, Thurman Thomas, Jim Kelly and Marv Levy has there been this much optimism about football in Western New York.

Can't blame the folks in Buffalo, either. Through two weeks, the Bills have been dynamic on offense and defense.

“It’s super early,” says receiver Stefon Diggs, acquired in the offseason from Minnesota to enrich the offense, which he has done as the prime target for emerging quarterback Josh Allen. “I’ll have another conversation with you after Game 16 or like Game 17. I kind of don’t really get caught up too much in that type of stuff because things can change fast.”

Not to deflate that balloon, but they did it against the Jets and Dolphins. Now comes much more of a test: the Rams, also 2-0 and riding high.

The key matchup could be Allen and Diggs challenging Rams cornerback Jalen Ramsey, who once called Allen “trash.”

The Dolphins (1-2) had their first double-digit victory in 39 games, ending the longest drought in the league.

Sure would be nice to have this game in December. Still, we’ll take it — every week.

If you consider the matchup of the past two NFL Most Valuable Players, Chiefs quarterback Patrick Mahomes and Ravens QB Lamar Jackson as a tossup, then the Ravens probably have the edge because of their powerful defense and special teams. But let's concentrate on the brilliance of these squads.

The Ravens have won 14 straight regular-season games, the league’s longest run since Carolina won 18 in a row in 2014-15. Jackson is 21-3 as a starter with 40 touchdown passes. Ravens kicker Justin Tucker’s 90.9% success rate on field goals is tops in NFL history. Baltimore has allowed 21 points or fewer in 13 straight games, the longest active streak, has forced a turnover in 15 consecutive games and ranks first in the NFL with a plus-4 differential.

Super Bowl champion Kansas City has won 11 in a row overall, including the playoffs. Mahomes needs 75 yards passing to reach 10,000 for his career; this is his third season as a starter. Tight end Travis Kelce (6,605) moved past Henry Marshall for fourth in franchise receiving yardage last week and has caught at least one pass in 97 consecutive games. Kicker Harrison Butker tied the franchise record with two 58-yard field goals in last week’s win over the Chargers. He also made a 53-yarder during the game.

So sit back and enjoy.

The Raiders opened the season by scoring at least 34 points in the first two games for the third time in franchise history and first since 1968. That was long before the 2001 "Tuck Rule" game that no one should bring up to Jon Gruden, then and now the Raiders coach.

A win here — the Raiders rarely play their best on trips to the East Coast — could stamp Las Vegas as, wait for it, a good bet to contend in the AFC West.

Cam Newton leads all quarterbacks with four rushing touchdowns, the most by a QB through the first two weeks of the season in NFL history.

The Mile High City ranks pretty low on Tom Brady’s list of favorite places to play. The Broncos are the only team with a winning record against Brady and they’re 7-4 against him in Denver, including 3-0 in the playoffs.

Of course, Peyton Manning had a hand in some of that — and Jeff Driskel, the backup QB for the Broncos, gets this start with Drew Lock hurt.

Bucs linebacker Shaquil Barrett returns to Denver. He signed with Tampa Bay in free agency last year and led the NFL with 19½ sacks. Barrett played five seasons with the Broncos.

Hide your eyes if you like defense; neither of these teams seem capable of stopping opponents.

When they have the ball, though, it’s lights out: Russell Wilson tied a career high with five touchdown passes against New England’s allegedly strong secondary, and has nine TDs in two games. DK Metcalf s emerging as a threat everywhere, with some already comparing him to Calvin Johnson. Megatron Northwest?

Dallas QB Dak Prescott threw for 450 yards and ran for three touchdowns in a stolen victory against Atlanta.

They are getting antsy in the Big Easy about Drew Brees, perhaps forgetting that his mediocre showing last week at Las Vegas was without Michael Thomas. There likely isn’t a more valuable player on any offense who doesn’t play quarterback than Thomas.

They are getting euphoric in Titletown over the Packers’ start, led by a pair of Aarons in Rodgers (six TD passes and no interceptions) and Aaron Jones (a career-high 236 scrimmage yards and three TDs last week). The defense has been reliable, too.

The Falcons also struggle when they don’t have the ball, and their special teams were a fiasco at Dallas. Hey guys, you can pick up an opponent’s onside kick before it goes 10 yards.

The Falcons became the first NFL team since at least 1933 to score 39 points, commit no turnovers and lose a game.

Chicago is an unconvincing 2-0, with wins over Detroit, needing a huge rally, and the Giants, needing to hold on late.

Cleveland came alive in its win over Cincinnati and has had the longer layoff that a Thursday night appearance provides. The offense was balanced vs. the Bengals: 215 yards rushing, 219 passing. Nick Chubb (124) and Kareem Hunt (86) combined for 210 yards rushing and scored three TDs.

Sparked by No. 2 overall draft pick DE Chase Young, Washington’s defense leads the NFL with 11 sacks. Young is tied for the league lead with 2½ sacks.

What a mess in Minnesota. Yes, it’s early, but already the Vikings are two games behind in the NFC North, 0-2 for the first time in seven seasons under head coach Mike Zimmer. They’ve have been outscored 37-13 in the first half and are last in the league in time of possession at 20:10 per game.

Into the US Bank Stadium comes Tennessee, which is 1-7 at Minnesota, though with no fans — and the better team thus far — that shouldn’t matter. Derrick Henry, the NFL rushing leader in 2019, ranks second in the league with 200 yards and has a league-high 56 carries.

The Niners stayed in West Virginia in between visits to the New Jersey Meadowlands. They complained about the turf in their rout of the Jets, but the NFL’s inspectors have given the field a thumbs-up.

San Francisco will be severely short-handed, most damaged on the defensive line with Nick Bosa and Solomon Thomas out for the season with knee injuries, and at running back (Raheem Mostert, Tevin Coleman are hurt). QB Jimmy Garoppolo has an ankle issue and likely won’t start.

So much chatter out of Pittsburgh has focused on the things the Steelers aren’t quite doing right. But with quarterback Ben Roethlisberger back, the offense has balance. That defense is reviving memories of the Steel Curtain. So calm down, Steel City.

The negative vibes out of Houston are more accurate. The Texans have looked outmanned in both losses, though they were two of the AFC’s top teams, Baltimore and Kansas City.

The Lions get off to good starts, then collapse. If they continue that pattern, coach Matt Patricia will be a defensive coordinator somewhere next year.

Arizona is the opposite, a team on the rise with excitement streaming everywhere — led by quarterback Kyler Murray and wideout DeAndre Hopkins.

“It’s not my first time dealing with success in my lifetime,” Murray said. “This is part of the game. We work hard in the offseason, we work hard to practice to win. We expect to win.”

The Eagles are reeling far more than the Bengals, who have looked somewhat revitalized — at least when they have the ball — with top overall draft pick Joe Burrow at quarterback. Philly is injured (again) and off-stride on offense and defense.

QB Carson Wentz has made too many bad decisions, particularly when the Eagles have been in position to seize control.

Now they are wondering if the Jets practice hard enough? They certainly don’t play well enough, and they have no weapons on offense. Indy’s defense has allowed a league-low 416 yards and is tied for third in sacks with seven.

Indianapolis can have up to 7,500 fans at Lucas Oil Stadium, an increase of 5,000 from last week.

After the medical mishap with starter Tyrod Taylor, Justin Herbert gets his second straight start for LA. At least this time he knows well before kickoff.

The Panthers have a 10-game losing streak going back to last season. They have also dropped their past six on the road and will be without injured All-Pro running back Christian McCaffrey.