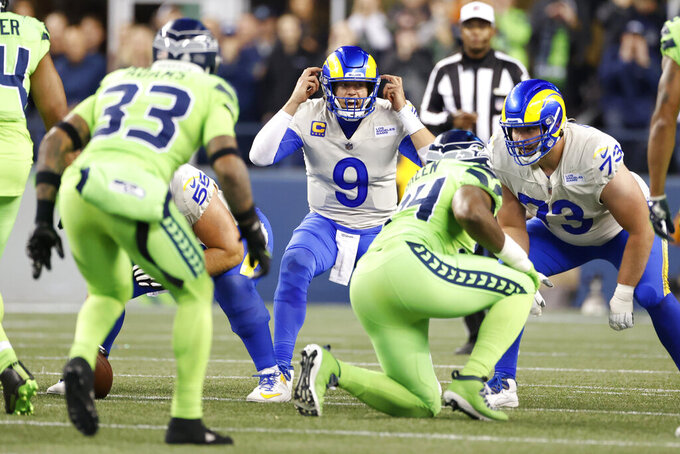 Los Angeles Rams quarterback Matthew Stafford calls from the line of scrimmage during the second half of an NFL football game against the Seattle Seahawks, Thursday, Oct. 7, 2021, in Seattle. The Rams won 26-17. (AP Photo/Craig Mitchelldyer)

THOUSAND OAKS, Calif. (AP) — While winning mostly eluded Matthew Stafford during his 12 seasons with Lions, the quarterback still has positive feelings about his time in Detroit, even after his career was rejuvenated by a trade to the Los Angeles Rams.

Going into his first game against the franchise that drafted him first overall in 2009, Stafford doesn’t want to jeopardize those good feelings. He rejected the suggestion that his early success with the Rams means he did not receive adequate support from the Lions.

“I know when I was in Detroit, everybody was doing everything we could to try and make the team as good as we could, myself included,” Stafford said Wednesday. “I’m in a new place now. I’m here in LA, lucky to be surrounded by the people I’m surrounded with, no doubt. I’m just trying to make the most of my opportunities and win as many games as I possibly can.

“Appreciate my time in Detroit, appreciate all the players I played with, all the coaches that coached me and everybody else on our team. But I don’t spend too much time thinking about it or reading that narrative, to be honest with you.”

Stafford has thrown for 1,838 yards with 16 touchdowns and four interceptions in leading his new team to a 5-1 record. He has formed one of the most dynamic partnerships in the NFL with receiver Cooper Kupp, while still featuring the likes of Robert Woods and tight end Tyler Higbee. Stafford is thriving behind an offensive line that looked average last season and has been sacked just six times.

Compare that to the struggles in Detroit for Jared Goff, the other piece of the enormous offseason trade between the Lions and Rams. A lack of viable targets on the outside has forced Goff to rely mostly on tight end T.J. Hockenson and the Lions' running backs. Having to play from behind has left Goff vulnerable to the pass rush, and he's been sacked 15 times in six games — all losses.

Stafford isn't focused on any such contrasts.

“I know I’m surrounded by great players and coaches that are that are really smart and have a clear vision, and we go from there, so I don’t want to sit here and compare my time at Detroit to my time here,” he said. “I’ve only been here a few weeks, just trying to make the most of it and play as good as I can.”

Stafford also expressed relief that there wasn't any acrimony in his departure from Detroit.

“I can see how it’d be very easy for people to feel the other way, and for people to take some happiness in any kind of success than any former player is having away from their building is really just a testament to them as well,” he said. “I mean, that’s the kind of people they are in Detroit, great people, you know, both in the organization and in the city itself, so I really did enjoy my time.”

Stafford insists his focus this week is on preparing to play, even with the Lions on the opposite sideline. That means recognizing some familiar faces when breaking down film. The young secondary that used to test Stafford in practice will now be trying to pick him off on Sunday.

There was a note of pride in Stafford’s voice as he discussed the improvement he noticed in Lions cornerback Amani Oruwariye and safeties Tracy Walker III and Will Harris.

“I think of Amani on the outside, like used to practice against him all the time and you could see that potential in there. And now you see him on Sundays doing it for real and playing great. It’s fun to see that,” Stafford said.

“Same with Tracy, same with Will Harris, those guys that I’ve practiced against a lot, and to watch them elevate their game and continue to progress and get better and better is fun for me to see. It’ll be a challenge for us this week.”

NOTES: Rookie WR Tutu Atwell is likely to return kicks after RB Jake Funk (hamstring) was put on injured reserve. ... RB Sony Michel did not practice because of a shoulder injury, but coach Sean McVay expects him to play. ... LT Andrew Whitworth and OLB Terrell Lewis got the day off for rest.