Mature Akins thrives in NFL after putting baseball aside 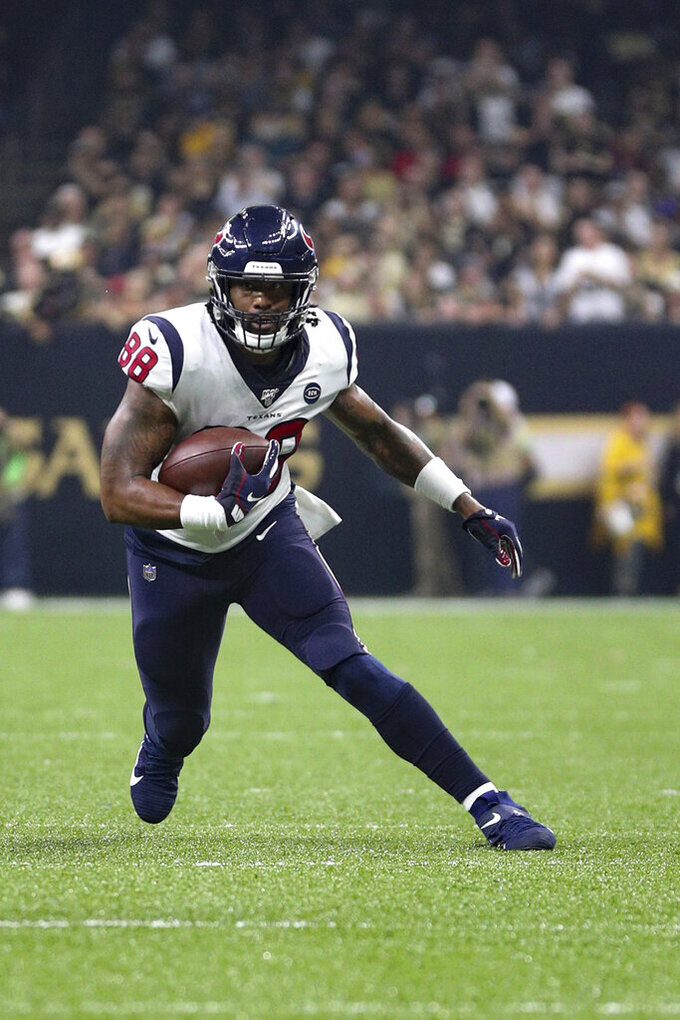 HOUSTON (AP) — Second-year Houston Texans tight end Jordan Akins has a maturity and understanding of being a professional athlete superior to most people with his experience thanks to a career he completed before playing a snap of college football.

Akins put his football dreams on hold to pursue a baseball career after being chosen in the third round of the MLB draft in 2010 by the Texas Rangers. He spent four years playing in the minors with limited success before moving on to play receiver at UCF, paving the way for his path to the Texans.

Akins was already 26 when he was drafted by the Texans in the third round of the 2018 draft after playing four seasons for the Knights.

Houston offensive coordinator Tim Kelly thinks his winding trail to the Texans has aided in his transition to the NFL.

"That definitely stands out. He's been a professional athlete before, so he's able to kind of deal with the highs and the lows of what comes along with that," Kelly said. "That helps him really be a steady presence in the tight end room ... (and) he's really done a good job of being consistent."

Akins said the daily grind of professional baseball taught him not to dwell on his struggles and always look ahead. He gave up baseball after failing to advance past Class-A in four professional seasons.

"I think baseball, what it really taught me was just control what you can and don't worry about what you can't," he said. "Because in baseball it's a game of failure so ... now I can clear my head and just play. If I know my assignments and do my job, I think it just gives me an advantage to just play relaxed and just go out there and play ball and have fun."

That mindset allowed Akins to contribute immediately as a rookie when he appeared in each game with six starts. He caught 17 passes for 225 yards last season last season but never got into the end zone while mostly working as a blocker.

That changed last week when the 6-foot-4, 243-pound Akins caught his first two career touchdown passes in the second half to help the Texans rally for a 27-20 win over the Chargers.

After playing receiver in college, Akins was thrilled to score for the first time in the NFL.

"It's like a reward to get the ball after doing all these blocks and going in the trenches and moving bodies," he said. "It's an honor."

Kelly said that Akins is very coachable and is always working to get better. So he was also excited when Akins had a chance to be in the spotlight for his performance on Sunday.

Akins has kept a close eye on the guys he played with during his baseball career and delights to see that many of those players have made it to the majors. He played with current Rangers stars Rougned Odor and Joey Gallo and roots for them. But now that his NFL career has taken off, he rarely misses baseball, becoming wistful only one time a year.

"Only in October," he said with a smile referring to the MLB postseason.

But as October approaches this year he may miss it a little less than normal as he becomes a bigger part of a Texans offense trying to build on its big game against the Chargers. What won't change is the no-nonsense approach Akins brings to work every day.

"I'm just doing what I've always done," he said. "Just do my job and when they present me with a play I just try to capitalize and do the best I can."