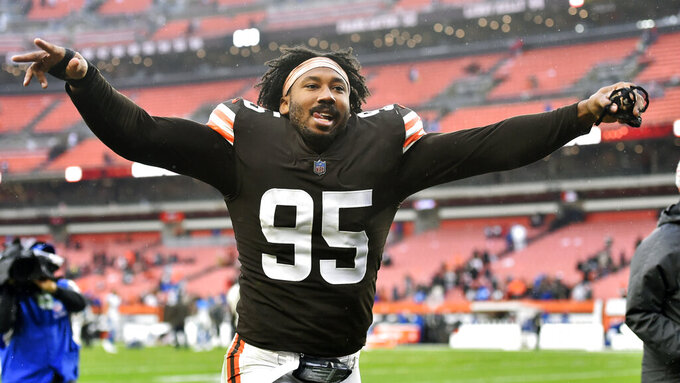 CLEVELAND (AP) — Every bad throw, every body ache and every chance Baker Mayfield missed to put away the Lions pained him.

The boos directed at Cleveland's quarterback — from some hard-to-please fans at home — didn't help. So when the final seconds ticked off in a 13-10 win that felt more like a loss, Mayfield didn't feel like celebrating.

“I feel like I let my teammates down,” he said.

With a day to process what went wrong and get a grip on his emotions, Mayfield said frustration with his own performance — not any booing or a litany of injuries — caused him to head straight to the locker room following the game and not speak to the media.

Mayfield threw two interceptions against the Lions in a sloppy, penalty-filled affair for the Browns (6-5), who held on for dear life and kept their playoff hopes intact as they head into a critical three-week stretch.

After the Browns ran out the clock to escape the upset, Mayfield took off his helmet and didn't acknowledge teammates, coaches or anyone from Detroit's team as he gloomily walked off the field.

He declined postgame interviews, which are required by the NFL unless a player is getting medical treatment.

“I was frustrated, among other things,” Mayfield said Monday on a Zoom call. "I mean I’ve never dodged any questions or hid — so just frustrated, removed those emotions and all of that from it and decided it was best to wait.”

Mayfield defended his decision to not discuss his uneven game.

“Not one part of that is not being accountable,” he said, snapping at a question. "I’d be the first to tell you I played like (expletive), so it’s not about accountable and I don’t owe you guys any of that.

"I owe that to my teammates and I talked to them, so that's what matters.”

Mayfield, who is playing despite shoulder, knee and foot injuries, had another uneven performance in a season in which he's trying to convince the Browns he's worthy of a long-term contract extension. The trouble is, with each two-interception, 50% completion game, he could be playing himself out of the job.

On Sunday, he went 15 of 29 for 176 yards with two interceptions and one touchdown. But he wasn't good when it mattered most.

After completing a 37-yard pass to Ja'Marcus Bradley, who was pushed into playing because of injuries across Cleveland's wide receiving corps, Mayfield went 1 of 6 with an interception to end the game.

“It's some of the harder throws I can make and then some of the easy ones I’ve done time and time again just don’t happen,” he said. “That’s very frustrating.”

Mayfield overthrew a wide-open Jarvis Landry on Cleveland's second possession for his first pick, and then was booed after a pass in the fourth quarter was deflected and hauled in by cornerback A.J. Parker.

Mayfield dismissed the negative reaction from some in FirstEnergy Stadium.

“Those are probably the same fans that won’t be quiet while we’re on offense and trying to operate,” he said. “So don’t really care.”

In addition to a fracture in his left shoulder, Mayfield has a bone bruise on his heel and a knee issue. He acknowledged the injuries are affecting him, but insists he didn't have any setbacks against the Lions.

Mayfield expects to start Sunday against Baltimore in the first of two games between the Browns and AFC North-leading Ravens in three weeks.

Like his favorite superhero, Batman, Nick Chubb arrived just in time to rescue the Browns.

A week after sitting out following a positive COVID-19 test, Chubb rushed for 130 yards, picking up 36 on Cleveland’s final drive as the Browns exhausted the last 2:29 to put away the scrappy Lions.

Points are at a premium. The Browns have scored 17 or fewer in six of the past eight games. Injuries have been an issue, but offensive execution and penalties have been far bigger problems.

Cornerback Denzel Ward had his second interception in three weeks, and the fourth-year player has done a solid job in coverage while matched up against top wide receivers.

“He has come up big for us in the last few weeks, especially making plays on the ball,” coach Kevin Stefanski said. "He has to continue to challenge those receivers and very simply do not let your man catch the ball — take your guy out of it.”

Mayfield will always have his detractors, it's that there seems to be an abnormally large contingent of them at the moment. The bottom line is that if he's going to play through injuries, he has to play at a higher level.

Stefanski said dynamic running back Kareem Hunt (calf) and starting 2020 All-Pro right tackle Jack Conklin (elbow) could both practice this week and play against the Ravens. Hunt has missed five straight games, while Conklin has been out for three.

Hunt is an invaluable offensive weapon.

“Kareem is kind of our Swiss Army knife,” center JC Tretter said. “He can do it all, pass game, run game.”

10 — Penalties for 82 yards Sunday by the Browns, who are among the league’s most penalized teams. Right guard Wyatt Teller was the most egregious offender, getting whistled three times for an illegal block, false start and hold.

Despite drama, injuries and inconsistency, the Browns remain in position to win their division.