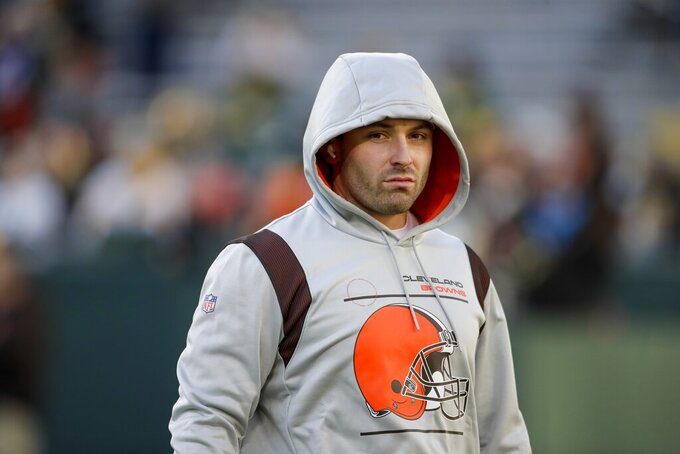 FILE - Cleveland Browns' Baker Mayfield warms up before an NFL football game against the Green Bay Packers Saturday, Dec. 25, 2021, in Green Bay, Wis. Baker Mayfield feels the Cleveland Browns lied to him about their off-season plans, which resulted in them trading for Deshaun Watson. Speaking on a podcast, Mayfield, whose tumultuous four-year run as Cleveland's quarterback essentially ended when the team acquired Watson in a stunning deal last month with the Houston Texans, said the team was not up front with him.(AP Photo/Aaron Gash, File)

CLEVELAND (AP) — Baker Mayfield feels the Cleveland Browns deceived him about their offseason plans, which resulted in them trading for Deshaun Watson.

Speaking on a podcast, Mayfield, whose tumultuous four-year run as Cleveland's quarterback essentially ended when the team acquired Watson in a stunning deal last month with the Houston Texans, said the team was not upfront with him.

“I feel disrespected 100% because I was told one thing and they completely did another,” Mayfield said in an appearance on the "Ya Never Know” podcast, which was taped last week.

Mayfield struggled while playing most of last season with a torn labrum in his left, non-throwing shoulder, which he injured in Week 2. Cleveland fell way short of expectations, finished 8-9 and missed the playoffs after ending a long postseason drought the previous season.

He underwent surgery right after the season and Browns general manager Andrew Berry publicly indicated the team was planning to bring Mayfield back as the starter while privately investigating whether to add Watson, accused by two dozen massage therapists in Texas of sexual assault and harassment.

When Mayfield learned of the Browns' interest, he demanded a trade. Watson, who initially turned down Cleveland, then changed his mind, waived his no-trade clause and signed a record-setting $230 million fully guaranteed contract.

While still upset over the way it was handled, Mayfield, the No. 1 overall pick in 2018, said he's at peace with his time with the Browns.

“I really, truly honesty have no regrets of my time in Cleveland of what I tried to give that place," he said. "True Clevelanders and true Browns fans know that, and that’s why I can walk away from the whole situation feeling like I did it.”

Mayfield remains on Cleveland's roster as the team tries to work out a trade. The tricky part for the Browns is that he's due to make $18.8 million, and there aren't many teams willing to take on that salary.

As his performances worsened last season, the 26-year-old Mayfield acknowledged he spent too much time caring about how he was being treated. He said a break from social media helped, but it was hard to block out everything.

Mayfield was booed at FirstEnergy Stadium during a win over Detroit in Week 11 and skipped his postgame news conference.

"When people are so critical of it,” Mayfield said, “I would love to show up at somebody’s cubicle and just boo the (crap) out of them and watch them crumble. I’d be lying to you if I didn’t say that I get caught up in all the negativity and stuff during the year last year.”

Mayfield reflected on his time with the Browns during the 90-minute interview, his first since the Watson deal was completed.

He feels liberated being out of Cleveland.

“I got my taste of it because I’ve had four different head coaches in four years, a bunch of different coordinators. I’ve had the highs and they always come back," he said. "I had great times my rookie year. I didn’t start in the beginning. I came in and had fun in the back half of the year. 2019 sucked. 2020 was great, made the playoffs.

"2021 was miserable. I’m just looking for stabilization right now. I know what I need to do to be the best version of me and be able to lead an organization. I’m in a good place right now. I have no clue where I’m going.”

Seattle and Carolina are still believed to be possible landing spots for Mayfield, who is looking forward to a reset of his career.

“I’m ready for the next chapter, the next opportunity,” he said. “Because the only thing I’m guaranteed with the next spot is one year, because I have one more year of guaranteed contract. So I have one year wherever I go and it’s my next interview. It’s something to put on my resume for the next job.

“Whether it be I play that year wherever it’s going to be and they extend me for longer, or if it’s that year and I get picked up somewhere else. I know I have this one year to do as much as I possibly can.”