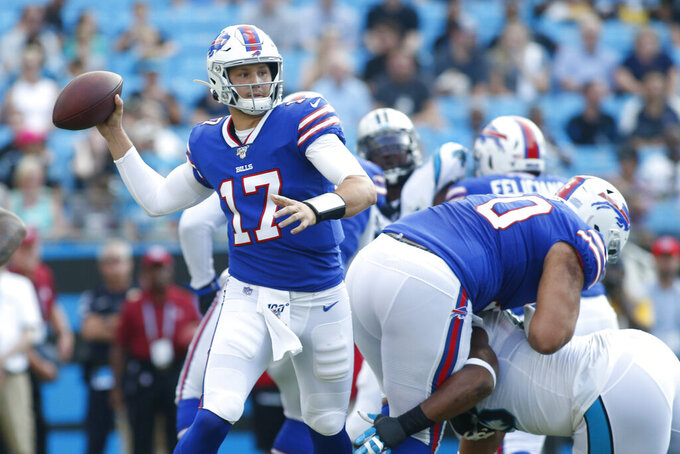 "But it's not my call," the quarterback said.

It's up to coach Freddie Kitchens, who said he will use his starters some but seems inclined to keep them fresh and uninjured heading into the Sept. 8 opener with Tennessee. He said his decision will be made on "a player-by-player basis."

Mayfield played one series in the preseason opener against Washington before sitting out last week's game at Indianapolis.

Star wide receiver Odell Beckham Jr. has yet to make his debut with Cleveland as he deals with a hip injury the team insists is not serious.

It has been an eventful week for Mayfield.

In a GQ article on Mayfield published Tuesday, the former No. 1 overall selection said he was shocked the Giants drafted QB Daniel Jones with the No. 6 pick this year and questioned why New York would take a player without a proven track record of winning.

Claiming he was taken out of context in an interview conducted four months ago, Mayfield said Wednesday that he reached out to Jones to make sure he understood he didn't mean any harm.

Mayfield acknowledged he told GQ that he was stunned by the choice of Jones — "blows my mind" — but that he didn't mean any disrespect toward Jones and that other comments in the article were pieced together.

As for the rest of the Browns, the team has only a couple of unanswered roster questions nearing the end of August. One is at right guard, where Kevin Zeitler's departure in the trade with the Giants for Beckham has opened a spot. Eric Kush seems to be the front-runner, with rookie Drew Forbes making a recent push.

Also, the Browns need either incumbent Greg Joseph or rookie Austin Seibert to grab hold of the kicker's job. Both have been inconsistent throughout camp and it's gotten to the point where general manager John Dorsey may have to sign a free agent.

Newly signed receiver Braxton Miller could see some action. He was recently released by the Eagles, but the Browns like the former Ohio State quarterback's speed and versatility.

Friday's matchup features teams with the longest postseason droughts in the league. Cleveland hasn't made the playoffs since 2002. The Buccaneers haven't earned a berth since 2007 and haven't won a playoff game since their 2002 Super Bowl run.

Tampa Bay starters linebacker Lavonte David, defensive lineman Vita Vea and wide receiver Mike Evans will not play. Several other players who are dealing with injuries will be game-time decisions, according to coach Bruce Arians.

Jameis Winston will start and play as long as the No. 1s are in the game. Arians said he doesn't have definitive plans for how long the regulars play.

"How much they play will be determined on how we're playing, and we'll make those decisions as the game goes on."

When the Lions host the Bills, two quarterbacks may be competing for one spot on Detroit's roster.

Josh Johnson and David Fales will likely get a lot of snaps because the Lions are trying to keep Matthew Stafford healthy. Stafford has not stepped on the field during a preseason game this year and coach Matt Patricia refused to say if that would change against Buffalo.

"Everybody is preparing like they should, like we have to go play a game," Patricia said. "It's the only way to go through those mental reps to get ready to go."

The Lions have a sense of urgency to figure out their situation behind Stafford because Tom Savage was signed to be his backup but is in the NFL's concussion protocol.

Josh Allen gets what's expected to be his final preseason opportunity to oversee the Bills' new-look offense, with running backs LeSean McCoy and Frank Gore expected to split most of the duties through the first half.

The second-year quarterback is coming off an efficient outing in which he went 9 of 11 for 102 yards and engineered two scoring drives in a 27-14 win at Carolina.

One focus will be a retooled offense line and whether rookie Cody Ford will start at right guard or right tackle. The line, however, will be missing center Mitch Morse, who has spent the past 3½ weeks in the concussion protocol. Rookie tight end Dawson Knox is expected to make his preseason debut after recovering from a hamstring injury. The Bills are depleted at the position, with projected starter Tyler Kroft expected to miss the start of the season recovering from a broken foot.

Buffalo's defense, which returns mostly intact, seeks to continue what's been a smothering performance, having allowed a combined three field goals in the first half of its first two preseason games.