Mayfield practices with Browns after stay on COVID-19 list 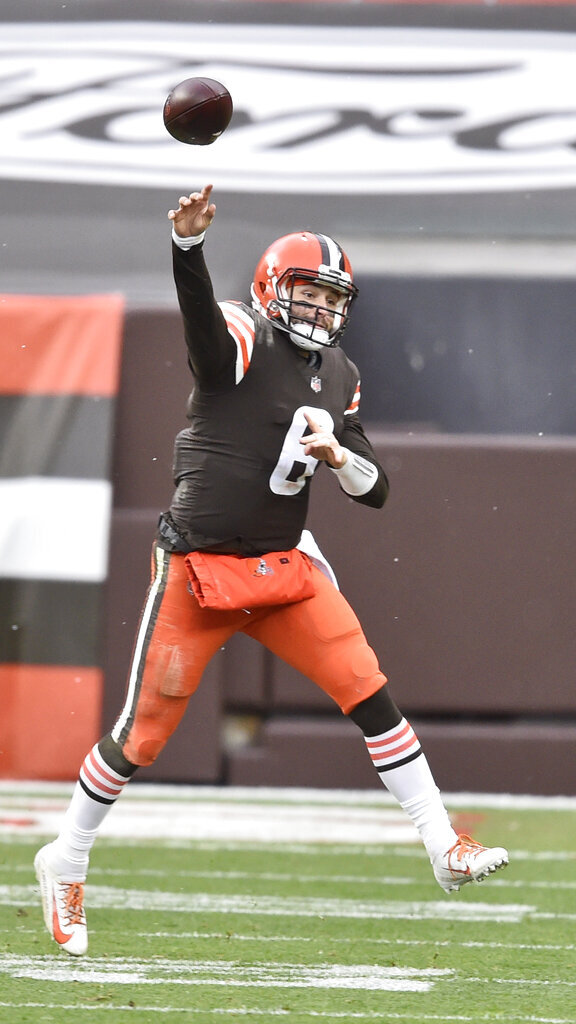 The Browns quarterback returned Wednesday feeling refreshed and somewhat relieved following a midseason break that ended with him on the COVID-19 list.

Mayfield was activated and practiced as the Browns (5-3) continued preparing to host the Houston Texans on Sunday. Mayfield had to isolate for several days after he had close contact with a staff member — not a coach — who tested positive for the coronavirus.

Any other time this season, Mayfield would have missed a game.

“Lucky it was on a bye week," Mayfield said. "That is for sure.”

It was a fortunate break for the Browns, who have endured more than their share of major injuries this season. The team placed Mayfield on the reserve/COVID-19 list Sunday, and he was not allowed at the facility before he had consecutive negative tests.

Mayfield chalked up his ordeal to just another 2020 obstacle.

“It kind of is what it is — circumstances,” he said. "You deal with it and roll with the punches. I can’t control it. So, if I was worried about controlling it then yeah, I would say it would have been stressful, but like I said it is what it is and luckily I was able to get back in the building and get back to work.”

But with coronavirus numbers spiking around the NFL — the unbeaten Steelers put Ben Roethlisberger and three other players on the COVID-19 list Tuesday — and across the country, Mayfield said his situation was yet another cautionary tale underscoring the season's fragility.

Now more than ever, players have to be careful.

“It is a full effort from everybody,” Mayfield said. "Not only just players but staff, families of staff and families of players. Everybody has a hand in the pot, and it is so true because of the close contacts. It is not just if you have COVID. It is if you have been around somebody, immediately you can be out for a few days.

“Where it hits in the week, it can be critical to a game or not.”

Mayfield's return coincides with the Browns getting back three starters: running back Nick Chubb, right guard Wyatt Teller and tight end Austin Hooper. Chubb missed four games with a sprained right knee, Teller sat out three with a calf sprain and Hooper two after having his appendix removed.

The Browns, who hit the midpoint of the season with a winning record for just the third time since 1999, haven't been this healthy in weeks.

The time off also allowed Mayfield to heal from a rib injury that bothered him for weeks.

"It is amazing what just not getting hit on one Sunday does for you,” he said.

Mayfield spent part of the week off breaking down with his coaches the positives and negatives from the first eight games. There was some good and some bad, but the third-year QB is coming off two positive performances.

He completed 21 straight passes and threw for five touchdowns, including the game-winner in the closing seconds, to beat Cincinnati on Oct. 25. Before the bye, Mayfield went 12 of 25 for 122 yards in gusting winds in a loss to Las Vegas. But he was plagued by several drops, one by Jarvis Landry in the end zone.

Coach Kevin Stefanski feels his quarterback is poised for a big second half.

“I think Baker would tell you there are moments where he was really good and moments that he wants to get better,” Stefanski said. "I think that is just a great focus for our guys moving forward. We can help him, I know that. We can help him for sure in some of the design and some of the play calls.

"I think he is ready to ascend.”

Mayfield wouldn't go that far and insists he's got a lot long way to go.

“You do not want to pat yourself on the back,” he said. "You want to look at what we are doing well, see how it complements other things and try and put that together. Done some good things to put us in position to win, but I think some of the turnovers or things that can be easily be fixed.

NOTES: Chubb, who will play with a brace, has not been activated from injured reserve and said it's not a given he'll face the Texans. “I have to go through doctors, team athletic trainers and coaches,” he said. "It is more than just me saying I feel great.” Stefanski said a decision on Chubb will be made Friday. ... LG Joel Bitonio (elbow) and RT Jack Conklin (excused absence) practiced after missing Monday.