Mayfield in spotlight as Patriots prepare to host Browns 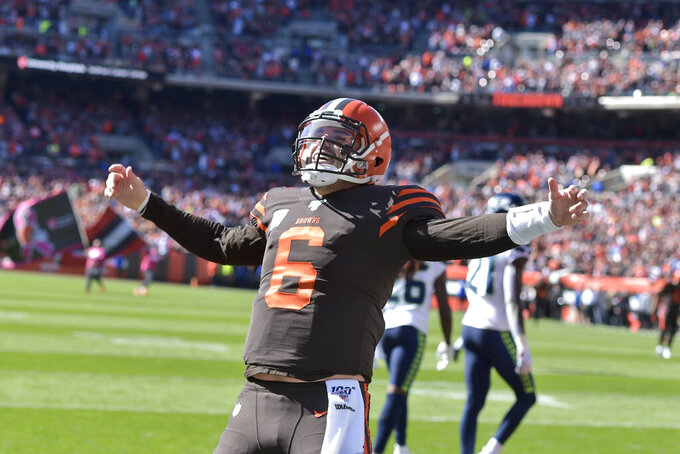 Cleveland Browns quarterback Baker Mayfield celebrates a touchdown during the first half of an NFL football game against the Seattle Seahawks, Sunday, Oct. 13, 2019, in Cleveland. (AP Photo/David Richard) 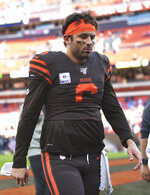 FOXBOROUGH, Mass. (AP) — At one point during the Patriots' 33-0 shutout over the Jets last week, second-year quarterback Sam Darnold said he felt as if he was "seeing ghosts."

New England's defenses have had that effect on young quarterbacks during coach Bill Belichick's tenure.

The Patriots have won 20 straight games against first- or second-year signal callers, the longest such streak in NFL history.

Five of those victories have come this season, with New England's top-ranked defense limiting the Jets' Darnold and Luke Falk, Dolphins' Josh Rosen, Bills' Josh Allen and Giants' Daniel Jones to a combined 44 percent completion rate and 595 yards, while coming away with 12 interceptions. Jones had the lone passing touchdown among the group.

The next to try to break the streak is Cleveland Browns second-year quarterback Baker Mayfield , who is coming off a three-interception performance in a loss to Seattle and leads the league with 11 picks.

"They try to get you to give the perfect look or perfect protection and they mix stuff up," Mayfield said of New England's defense. "They pressure you. They hit you up. If you are a young quarterback, you can see that."

But knowing how the Patriots defense attacks is just part of it. New England has also been masters at taking away opposing offenses' top options.

Browns receiver Odell Beckham, Jr. knows that means that Belichick will be trying to take him out of the game plan and capitalize of any miscues.

"You can't beat them by making mistakes. They do not make many mistakes," Beckham said. "They have few penalties. They play perfect."

Or at least very close to it.

The Patriots also are holding teams to a league-low 14.3 percent success rate on third down and lead the NFL with 18 interceptions.

Safety Devin McCourty said despite Cleveland's recent struggles, they are aware of the big-play potential the Browns possess.

"The way Baker Mayfield plays, he's able to escape the pocket, (and) still throw the ball on the money," said McCourty, who leads the NFL with five interceptions. "So, it's an offense that you have to be ready to go (against)."

Belichick could experience a bit of symmetry on Sunday.

Belichick earned his first NFL victory as Browns coach in 1991 against the Patriots. But with a win over the Browns on Sunday he would earn his 300th victory (including playoffs) as an NFL head coach.

Tom Brady's receiving group will undergo another adjustment this week after the Patriots placed receiver Josh Gordon on injured reserve with a knee injury .

The Patriots will now be leaning even more on veteran Mohamed Sanu, acquired in a trade with Atlanta on Tuesday, to provide stability to an offense that leads the league in scoring at nearly 32 points a game.

The 30-year-old Sanu has 33 receptions for 313 yards, but only one touchdown this season.

Beckham said that playing for Belichick and with Brady was on his bucket list.

When Beckham was with the New York Giants, there were rumors that he was going to be traded to New England. The deal never materialized, but Beckham said he would have welcomed a chance to play for the NFL's gold standard.

"I was willing and ready to go over there," he said. "That was always a dream of mine to play for Tom Brady and Belichick."

"It's about winning, but it's about the way they go about it," he said. "How everything is precise and everything is just perfect. It feels good to win."

The Browns may look different up front on Sunday.

Coach Freddie Kitchens and his staff spent the bye week mulling possible lineup changes, and it's possible there will be one — and perhaps two — switches on Cleveland's offensive line. Left tackle Greg Robinson, who made a huge impact when he was promoted to a starter midway through last season, could be replaced by Justin McCray.

Robinson has committed some drive-killing penalties and hasn't played as well as the Browns hoped — or needed.

A year ago, the Browns subbed Robinson for Desmond Harrison, and Mayfield was only sacked five times over the final eight games.

Browns star defensive end Myles Garrett's bye week began oddly — with a fan punching him in the face. Stopped in traffic, Garrett took the unexpected blow from a man who initially asked him for a photo before lashing out.

Garrett downplayed the incident this week.

Garrett has a great rapport with fans and doesn't think the matter will make him more cautious in public.

"Hesitant to open my window," he said. "That's about it."

By W.g. Ramirez an hour ago
By Dennis Waszak Jr. 5 hrs ago
5 hrs ago
By David Brandt 6 hrs ago
By Andrew Seligman 6 hrs ago