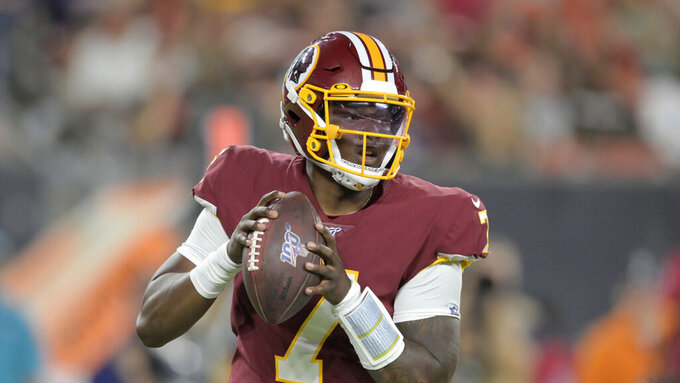 Washington Redskins quarterback Dwayne Haskins looks to pass during the first half of the team's NFL preseason football game against the Cleveland Browns, Thursday, Aug. 8, 2019, in Cleveland. (AP Photo/David Richard) 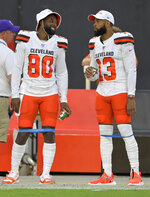 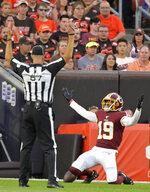 Mayfield threw a touchdown pass to end his only series, Beckham never put on his new orange helmet, and the Cleveland Browns gave a brief preview of their offensive firepower during a 30-10 win over the Washington Redskins in an exhibition opener Thursday night.

Mayfield picked up where he left off following his "dangerous" rookie season, firing a 24-yard TD pass to Rashard Higgins as the Browns went no-huddle and drove 89 yards in just 2:13 to open the game.

"That's what they were supposed to do," Browns first-year coach Freddie Kitchens said after his debut. "They're supposed to get completions, big, chunk plays. And I thought we did a good job outside, inside, everywhere. It was a real nice first drive."

They did it while Beckham, the Browns' major offseason acquisition in a trade from the New York Giants, was kept on the sideline along with Pro Bowl receiver Jarvis Landry by Kitchens.

"Yeah, I didn't think it was worth the risk," he said. "They've been trying to fight through a couple things, minor things, nothing to write home about, per se. But no reason (to play them). I mean, why?"

Mayfield didn't need his top targets. He misfired on his first pass, but was otherwise flawless, going 5 of 6 for 77 yards and a perfect 158.3 rating before turning Cleveland's offense over to backup Drew Stanton.

"It's great," Mayfield said. "I always say, next man up, and we have to have that mentality. Whoever is in there has got to have success and got to be able to play. And just having those guys out there and doing well that first drive means a lot."

While the Browns' quarterback situation is finally settled, the Redskins' is, well, incomplete.

Case Keenum, in a three-way competition with Colt McCoy and rookie Dwayne Haskins, started and threw a 46-yard TD pass — thanks to a miscommunication by Cleveland's defense — to receiver Robert Davis in the first quarter. He finished 4 of 9 for 60 yards.

McCoy was kept out, still recovering from surgery after breaking his right leg last season.

Haskins, who set numerous passing records during one season as Ohio State's starter, completed a 27-yard pass on his first attempt. However, he badly underthrew a pass in the second quarter and was picked off by rookie linebacker Mack Wilson, who returned it 40 yards to give the Browns a 14-7 lead.

Haskins threw a second pick later in the half. He completed 8 of 14 passes for 117 yards.

Redskins coach Jay Gruden didn't give any hints about his pecking order, but spoke mostly about Haskins, the team's first-round pick.

"There were moments that he looked pretty good, but there were a couple throws he'd like to have back," Gruden said. "Your first game in the NFL, not everything is going to go perfect."

Hall of Fame quarterback and longtime announcer Sonny Jurgensen is abruptly retiring from broadcasting. The 84-year-old released a statement in which he thanked Washington fans "for being so generous to me and our teams, we owe it all to you."

Jurgensen passed for 32,224 yards and 255 touchdowns in 18 seasons for the Redskins and Philadelphia Eagles. He retired from playing after the 1974 season.

Browns rookie Damon Sheehy-Guiseppi returned a punt 86 yards for a TD in the final minutes. He was mobbed in the end zone as Cleveland's sideline poured onto the field to celebrate.

Higgins took advantage of Beckham and Landry not playing and had a big night, catching five passes for 98 yards — all in the first half.

Pro Bowl DE Myles Garrett, who has been unstoppable in camp, forced Redskins tackle Geron Christian Sr. to grab his jersey or Keenum would have been sacked. Garrett and Larry Ogunjobi were the only starters on Cleveland's line to play as Olivier Vernon and Sheldon Richardson sat out.

Washington was called for four holding penalties on its opening drive; three were declined. The Redskins were called for seven infractions.

A fifth-round pick from Alabama, Wilson has shown a nose for the ball in camp. On Wednesday night, he told Sione Takitaki he'd pick off two passes and return one for a TD.

"It's crazy," he said. "Me and Taki were sitting in the room last night looking over plays as usual. I was like, 'Taki, I'm going to catch two interceptions tomorrow. I'm going to crib one and I might just catch one. "'

Redskins: Starting MLB Shaun Dion Hamilton (chest) was hurt in the first quarter and did not return.

Browns: OL Kyle Kalis left with a concussion in the second quarter. He's been competing for the starting job at right guard. Cleveland has had a rash of head injuries, with four others sidelined by them. ... Starting LB Joe Schobert missed the game for personal reasons.

Browns: Practice for two days in Indianapolis with the Colts before playing them on Aug. 17.