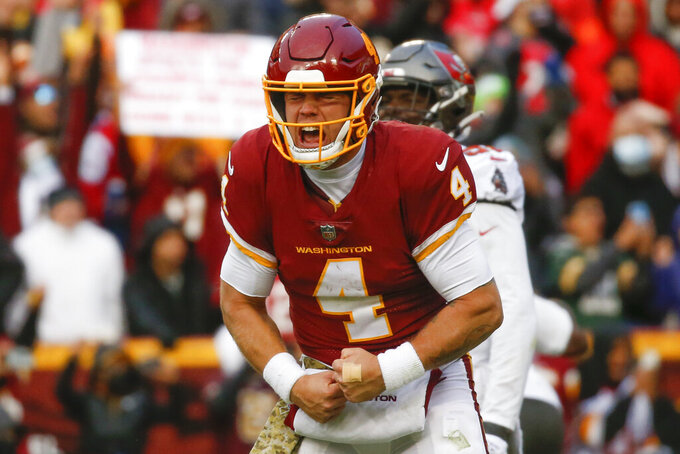 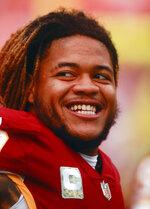 OPENING LINE: Patriots by 3 1/2, according to FanDuel SportsBook.

TURNOVER DIFFERENTIAL: Washington minus-3; Panthers minus-5.

WASHINGTON PLAYER TO WATCH: DT Jonathan Allen leads the team with six sacks and has been the defense’s best player all season. With pass rushers Chase Young and Montez Sweat on injured reserve, the onus is on Allen and fellow Alabama product and first-round pick Daron Payne to continue to create interior pressure and help some young replacements ease into bigger responsibility.

PANTHERS PLAYER TO WATCH: QB Cam Newton is expected to get the start after playing in a limited role last week vs. Arizona. Newton scored touchdowns on his first two possessions for the Panthers — first on a 2-yard run and then on a 2-yard pass play. However, Newton has lost his last eight starts with the Panthers.

KEY MATCHUP: Panthers RB Christian McCaffrey vs. Washington front seven. McCaffrey is starting to feel healthier and that’s a problem for the opposition. The 2019 All-Pro had 161 yards from scrimmage last week vs. Arizona despite still seeing a reduced number of carries since returning from injured reserve. He faces a stingy run defense that ranks sixth in the league. However, Washington is 30th in pass defense, which means McCaffrey could be a dominant weapon through the air. McCaffrey has 11 games with 10 or more catches during his career, the most by a running back in NFL history.

KEY INJURIES: Washington is expected to again be without former Panthers WR Curtis Samuel (groin) and TE Logan Thomas (hamstring) and will play its first game since Young tore the ACL in his right knee. TE Ricky Seals-Jones could also be out with a hip injury. CB Kendall Fuller is dealing with a knee injury. Rookie CB Benjamin St-Just is in danger of missing a second consecutive game because of a concussion. .... The Panthers could be without DE Marquis Haynes (foot) this week but otherwise are fairly healthy.

SERIES NOTES: Washington coach Ron Rivera returns to Carolina for the first time since the Panthers fired him late in the 2019 season. He coached them from 2011 until then, a stint that included a Super Bowl appearance. ... Other Carolina connections on Washington’s roster include starting QB Taylor Heinicke, backup QB Kyle Allen, C Tyler Larsen and K Joey Slye. Heinicke made his first NFL start for Carolina in 2018. ... The Panthers have won six of the last eight meetings.

STATS AND STUFF: Washington is looking to win back-to-back games for the first time this season. ... Heinicke was 26 of 32 for 256 yards and a touchdown in Washington’s upset of reigning Super Bowl champion Tampa Bay. That 81.3 completion percentage is a career best. ... RB Antonio Gibson rushed for two touchdowns against the Buccaneers. ... WR Terry McLaurin leads the team with 632 yards receiving and four TD catches. ... WR DeAndre Carter had a 20-yard TD catch in the win against Tampa Bay. ... Former Panthers TE Temarrick Hemingway could start for Washington because of injuries. ... LB Cole Holcomb has made at least five tackles in 14 consecutive games dating to last season. ... First-round pick Jamin Davis is one of three rookie linebackers with 40-plus tackles. ... CB William Jackson III and S Bobby McCain intercepted Tom Brady last week. ... S Kam Curl led Washington with seven tackles against the Buccaneers. ... The Panthers have won six of the last eight games against Washington. ... Newton scored on the first two times he touched the ball last week but only played 12% of the plays. ... Newton has 71 career touchdowns rushing and 43 games with both a TD passing and rushing, the most by a QB in NFL history. ... The Panthers are 4-1 with McCaffrey in the starting lineup this season. ... DE Haason Reddick has 10 sacks this season, including 5 1/2 at home. ... Carolina's defense is limiting its opponents to just 33.1% on third-down conversion attempts. ... K Zane Gonzalez has made 16 straight field goal attempts.

FANTASY TIP: Panthers WR Robby Anderson has endured a brutal season with Sam Darnold at the helm, but he seems rejuvenated now that Newton has taken over at quarterback. Anderson had a touchdown last week and could be ready to re-emerge as a receiving threat with a new QB.