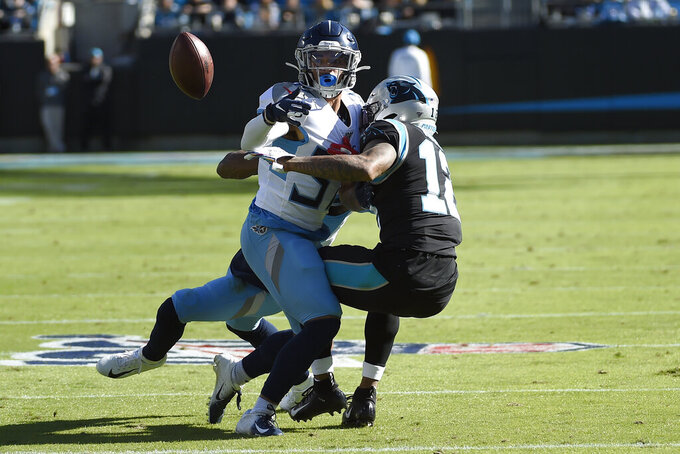 CHARLOTTE, N.C. (AP) — As Christian McCaffrey raced 58 yards to the end zone for his third touchdown of the game, chants of "MVP! MVP!" echoed throughout Bank of America Stadium.

McCaffrey turned in yet another spectacular stat line Sunday, amassing 166 yards from scrimmage and averaging 6.1 yards per carry to help Carolina beat Tennessee 30-20 and end the Titans' two-game win streak.

Halfway through the season, the third-year running back leads the NFL with 1,244 yards from scrimmage and 13 touchdowns and has put himself firmly in the hunt for the league's top individual honor.

McCaffrey might have been even more productive had he not left the game midway through the fourth quarter after hitting his head on the ground at the end of that 58-yard run when he was tackled crossing the goal line. He was evaluated for a concussion and was cleared to return to the game but did not.

McCaffrey said he was "fine" afterward, and coach Ron Rivera said he just wanted to "be smart" with the Panthers up 16 points.

McCaffrey said he heard the MVP chants even as he was shaking off the collision.

"That was pretty cool," McCaffrey said. "We have a lot of ball left. But I'm very appreciative of that."

The victory was a big one for the Panthers (5-3), who were looking to erase the memory of a 51-13 loss to the San Francisco 49ers last week. A year ago, the Panthers suffered a 52-21 loss to the Pittsburgh Steelers and went on to lose seven straight games, knocking them out of playoff contention.

Rivera was determined not to let that happen again this year and talked all week about doing it with "actions, not words."

Rivera lived up to his own words, twice showing confidence in his players to make plays in crucial situations.

He went for it on fourth-and-2 early in the game, a gamble that resulted in a 7-yard touchdown pass from Allen to a wide-open McCaffrey, who had released out of the backfield and into the flat uncovered.

And in the third quarter Rivera signed off on a fake punt on fourth-and-4 from his 36 that swung the momentum to Carolina.

Colin Jones, who plays safety and on special teams, took a direct snap from long snapper J.J. Jansen and plowed ahead for a first down.

The call came at a pivotal time as the Titans had just drove 67 yards for a touchdown to cut Carolina's lead to 17-7 and stopped the Panthers on three plays to open the second half. But Jones' first down ignited the Carolina sideline, and the Panthers would cap the drive with a 1-yard touchdown run by McCaffrey.

"I'm thinking, 'Give me the rock,'" Jones said. "I looked up on the scoreboard and saw 'Jones: 1 carry for 5 yards.' I had to make sure I had a better average than Derrick Henry."

Henry finished with 99 total yards and two touchdowns for the Titans (4-5) and averaged 4.8 yards per carry.

But the Titans could never overcome the 17-point halftime deficit and were eventually thrust into full passing mode.

"We came out with urgency to get going" in the second half, Titans coach Mike Vrabel said. "The offense moved the football, converted on third down. We ran the football. Guys were finishing. In the end, we're spotting teams too many points."

Allen, who threw three interceptions in last week's loss to the 49ers, threw for 232 yards and two scores to improve to 5-1 this season as Carolina's starting QB and won the duel of backup quarterbacks.

Rivera said the Panthers will approach Cam Newton's rehab the same as they have been after the QB received a second opinion on his injured left foot Friday. Rivera said it's a "gradual process" and "until we are told any different from the doctors we will continue to do what we've been doing."

Allen will start next week at Green Bay, Rivera said.

Members of the Panthers defense placed defensive end Mario Addison's jersey on the bench before the game. Addison did not attend the game because he's still dealing with the death of his brother, who was killed last Sunday in Birmingham, Alabama.

"It's a very difficult time one of our guys is going through and a lot of these guys want to be there for him," Rivera said.

The Titans added kicker Ryan Succop to the roster this week and he missed all three field-goal attempts of 43, 56 and 44 yards.

Titans: Titans CB Malcolm Butler injured his left wrist late in the first half after Curtis Samuel landed on his arm after making a touchdown catch. He did not return to the game and Vrabel did not have an update on the injury after the game.

Panthers: Cornerback James Bradberry injured his groin late in the game and did not return.

Titans: Host the Chiefs on Sunday before getting a bye.

Panthers: Travel to face the Packers on Sunday.