McCaffrey: I should be No. 1 pick in Fantasy Football drafts 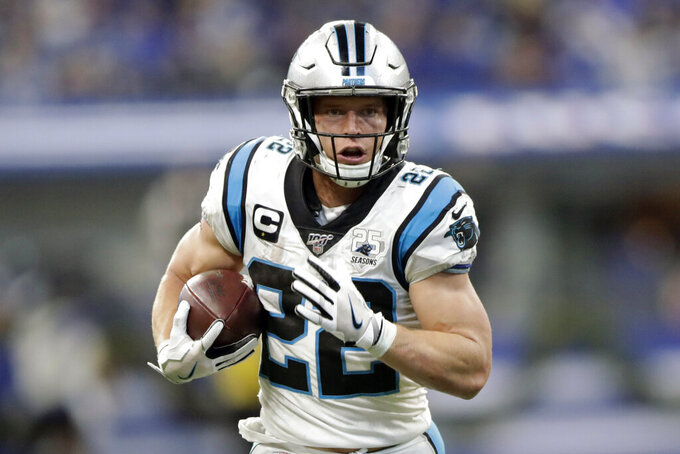 FILE - In this Dec. 22, 2019, file photo, Carolina Panthers' Christian McCaffrey runs during the second half of an NFL football game against the Indianapolis Colts, in Indianapolis. Christian McCaffrey has been one of the most used - and most productive -- running backs in the league over the last few years. Now that he has a big contract, he doesn't expect a letdown in usage. (AP Photo/Michael Conroy, File)

CHARLOTTE, N.C. (AP) — Christian McCaffrey has left no doubt as to who he thinks should be the No. 1 pick in this year’s fantasy football drafts.

“I’d take myself, yeah,” the Panthers All-Pro running back said confidently Thursday before breaking into a wide smile. “I would always take myself in fantasy.’’

The normally reserved McCaffrey is keeping his personal goals this season to himself, but it’s a good bet he’ll have a productive season based off his recent history in Carolina.

He became only the third player in NFL history to post at least 1,000 rushing and receiving last season, rushing for 1,387 yards and hauling in 116 catches for 1,005 yards. He scored 19 touchdowns.

Of course, the big question is how McCaffrey will be used under new offensive coordinator Joe Brady, who joins Matt Rhule’s staff after helping LSU win a national championship last season. Brady was the passing game coordinator for the Tigers and instrumental in the development of No. 1 overall draft pick Joe Burrow, who is now with the Bengals.

Brady has a tendency to spread the ball around to different players.

McCaffrey didn’t let on how he’ll be used this season — or if he will see as many snaps as he did in 2019 — but it’s clear he’s excited about Brady’s innovative offensive approach.

“It’s going to be a lot of fun,” McCaffrey said. “We have so many weapons on offense, from the receiving position to the tight end position to a very talented offensive line and obviously (new quarterback) Teddy (Bridgewater).”

As for his reps, McCaffrey said, “we’ll see. I just know I have a lot of trust in our coaches.

“They have a history of success and putting the best players in position to succeed,” he added. “I’m ready to line up anywhere and run any route, just continuing to expand my knowledge of the offense and the receiver position and the running back position and blocking schemes.”

The Panthers rewarded McCaffrey for three ultra-successful seasons with a four-year, $64 million contract extension in April.

So there is no indication the team plans to lighten his load moving forward, although McCaffrey has played the most snaps of any running back in the league over the last three seasons — raising some concerns about wear and tear on his body.

The Panthers aren’t expected to win a lot of games this season in the eyes of the prognosticators playing in an loaded NFC South that includes Tom Brady, Drew Brees and Matt Ryan at quarterback.

Carolina is in a rebuild mode after parting ways with veterans like Cam Newton, Luke Kuechly, Greg Olsen, Eric Reid, Mario Addison, James Bradberry and others, and bringing in a young coach in Rhule.

But McCaffrey said the Panthers aren’t worried about what others are saying.

McCaffrey generally shies away from the spotlight, but this past year there has been more more focus on his social life since he started dating Sports Illustrated swimsuit model Olivia Culpo.

Earlier this offseason, he served as a photographer for Vogue Magazine, and his photo of Culpo was used on the cover.

“That’s a one and done for me,” McCaffrey said with a laugh. “That was a long day for me. I never knew how much time goes into that stuff. I can say I photographed one time and my work was on the cover of Vogue Magazine. I retired right after that. I’m pretty excited about that.’’