McCarron (knee) out for season, Falcons in market for QB 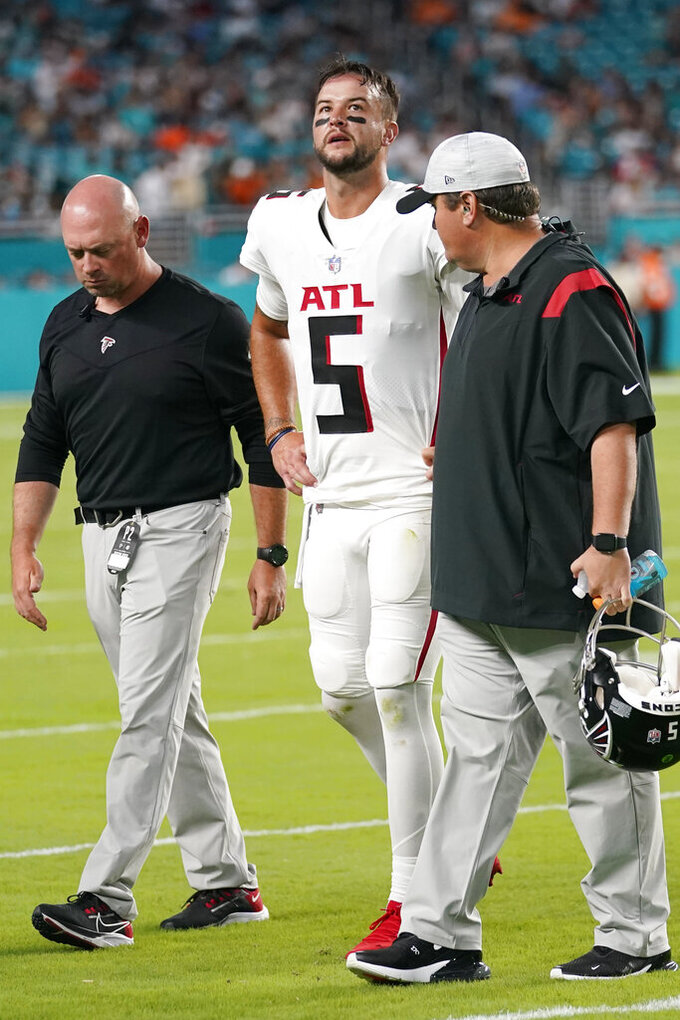 Atlanta Falcons quarterback AJ McCarron (5) is assisted off the field after he was injured on a play, during the first half of a preseason NFL football game against the Miami Dolphins, Saturday, Aug. 21, 2021, in Miami Gardens, Fla. (AP Photo/Lynne Sladky)

FLOWERY BRANCH, Ga (AP) — Falcons quarterback AJ McCarron is done for the season after sustaining a knee injury in a preseason loss to the Miami Dolphins, putting Atlanta in the market for a quarterback to back up Matt Ryan.

The team announced Sunday that an MRI showed a season-ending ACL injury to McCarron's right knee.

McCarron was apparently injured while fighting for extra yards on a scramble early in the second quarter of a 37-17 setback at Miami on Saturday night. He stayed in the game for one more play, a handoff, before hobbling toward the sideline.

“I really feel for AJ McCarron,” Falcons coach Arthur Smith said. "It’s tough when you know what these guys put into it.”

The 30-year-old McCarron was signed by the Falcons to fill the void left by the retirement of longtime backup Matt Schaub.

Undrafted rookie Felipe Franks is the only other healthy quarterback on the roster behind Ryan, so the Falcons will surely be looking to sign another veteran quarterback before their final preseason game.

Best known for leading Alabama to back-to-back national championships, McCarron played sparingly his first seven seasons in the NFL. He made three starts for the Cincinnati Bengals and one with the Houston Texans, while also spending one year with the Raiders.

Among the quarterbacks who might be of interest of the Falcons: Josh Rosen, Robert Griffin III, Blake Bortles and Josh McCown.

There's also a chance the Falcons might try to persuade Schaub to come back for another season. The quarterback, who turned 40 in June, attended a recent practice.