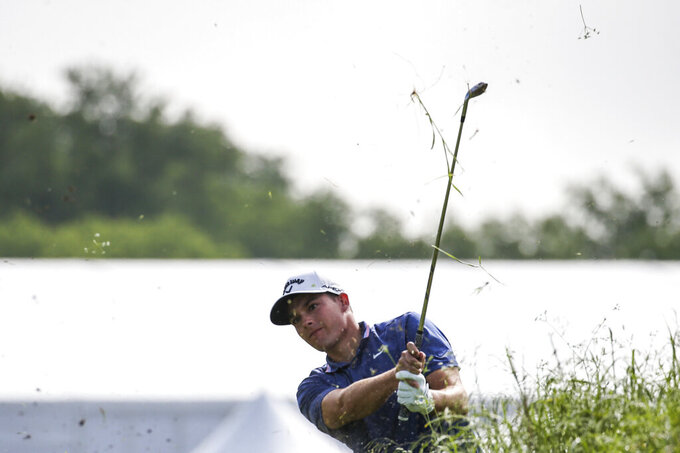 Aaron Wise hits a shot out of the rough toward the 18th hole during the first round of the Byron Nelson golf tournament Thursday, May 9, 2019, at Trinity Forest in Dallas. (Ryan Michalesko/The Dallas Morning News via AP)

DALLAS (AP) — Denny McCarthy has some loose connections to Jordan Spieth and Tony Romo, the Trinity Forest members in the local spotlight. The former University of Virginia player is on top of the leaderboard after one round at the Byron Nelson.

McCarthy shot a career-low 8-under 63 on Thursday, with 10 birdies over a 12-hole stretch after an early double bogey to take a one-stroke lead over Tyler Duncan and Tom Hoge. Three-time major champion Brooks Koepka, the No. 3-ranked player in the world, was among nine players at 65.

"Gives me the confidence that I know that I can shoot rounds like this," McCarthy said. "I've kind of been looking for a round like this just to kind of get me going. I know I can be out here playing with the best and today kind of showed that."

All of those now mid-20 somethings have wins, except McCarthy, who is fully exempt on the PGA Tour this season for the first time after winning the Web.com Tour Championship last September.

His best PGA Tour finish in his first 42 tournaments was fourth last year in the Dominican Republic at an event opposite the WGC-Dell Technologies Match Play. McCarthy played his first two rounds at the Corales Puntacana Resort & Club then with Romo, the CBS NFL analyst and former Dallas Cowboys quarterback who missed the cut there in his only two previous PGA Tour starts.

Romo, playing on a sponsor exemption as an amateur at home, had a 76 that included an opening birdie and a chip-in eagle from 66 feet at the 544-yard seventh hole . Those were his only subpar holes in a round with two double bogeys and four bogeys.

"Couple of the tee shots really cost me just because they're penal in those areas. You can't miss them there," Romo said. "Like I said, the separation between these guys is the ability to do it for long stretches, consistency."

Spieth had a 68 in the afternoon, when the wind picked up after mostly calm conditions for McCarthy and the rest of the morning starters at the links-style course inundated by heavy rain earlier in the week.

"Given the tougher conditions this afternoon and then tomorrow morning, it's just kind of about hanging around and trying to make something happen on the weekend," Spieth said.

McCarthy began his early round with three consecutive pars before a double bogey at the 437-yard fourth, when he had to take a penalty stroke after a wayward tee shot and eventually two-putted from 11 feet. He was still 2 over after another par at No. 5.

"(The double bogey) just kind of made me more calm after that," McCarthy said. "I came out with the mindset I wanted to be aggressive and I wasn't, and then after that double I kind of told myself, you know, just play really, really carefree and have fun with it."

A 9-foot birdie at the 415-yard sixth was the first of five consecutive one-putt birdies, three of those under 6 feet. McCarthy needed only 22 putts, 10 on the back nine. His 10 birdies were three more than he had ever had in a tour round.

"I put in some really nice sessions on the range the last couple of weeks and I didn't come out hitting it like I wanted to," he said. "It's easy just to not make a committed swing, and it cost me a couple shots there. But once I was aware that I wasn't in that aggressive mindset, kind of put me right back in and was able to get the round going."

All three of Koepka's major wins have come since his last Nelson in 2017, when the tournament was still at the Four Seasons resort before moving south of downtown Dallas last year. He had never been on the front nine before Thursday, having practiced only on the back nine Tuesday before Wednesday's pro-am was washed out.

After four consecutive birdies in the middle of his round (at Nos. 17, 18, 1 and 2), Koepka finished with three birdies and two bogeys on the last five holes. His approach at No. 6 went over the green into a bunker for a bogey, and his missed the green with his approach at No. 9, his finishing hole.

"Other than that, I struck the ball beautifully," said Koepka, the two-time U.S. Open winner who next week will defend his PGA Championship title. "Hitting it good and putting it good, it doesn't matter. Played a lot of golf courses where I really haven't seen the golf course and gone to play. You've got a yardage book."