McCoy trying to settle in as Giants quarterback 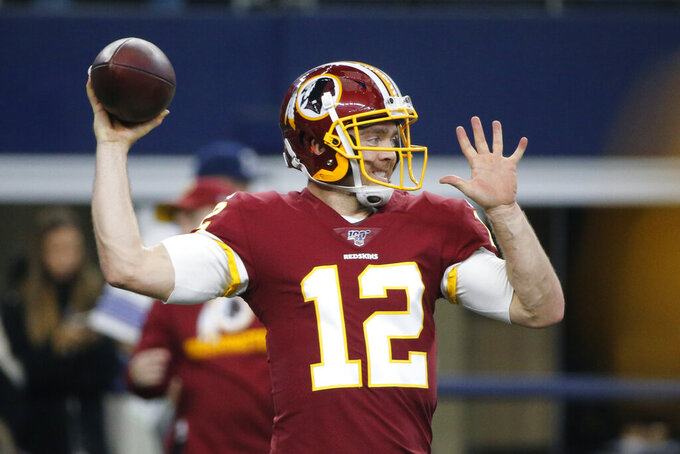 FILE - In this Dec. 15, 2019 file photo Washington Redskins quarterback Colt McCoy (12) throws before an NFL football game against the Dallas Cowboys in Arlington, Texas. After spending much of the past six seasons as a backup quarterback with the Redskins, Colt McCoy knows his job coming to the New York Giants. His primary task is to help offensive coordinator Jason Garrett and new coach Joe Judge get starting quarterback Daniel Jones, ready to play every week. Be another set of eyes, another set of ears, another encouraging voice for the second-year player. (AP Photo/Michael Ainsworth, file)

After spending much of the past six seasons as a backup quarterback with the Washington Redskins, Colt McCoy knows his job coming to the New York Giants.

His primary task is to help offensive coordinator Jason Garrett and new coach Joe Judge get starting quarterback Daniel Jones ready to play every week. Be another set of eyes, another set of ears, another encouraging voice for the second-year player.

The other job is to be ready just in case the young man from Duke who was the No. 6 overall pick in last year's draft gets hurt.

Don't forget that happened last season and Eli Manning had to return for one memorable final start in December. The two-time Super Bowl MVP retired following the season after spending much of the campaign as Jones' backup.

“I’ve been a starter, and everyone wants to be a starter, but as a backup, it’s just as crucial to handle your business that way,” the 33-year-old McCoy said Wednesday on a conference call. “I really feel confident that I bring value to this team and to that quarterback room. I think that approaching it that way is the right way.”

First things, first. McCoy needs to get to know Jones and his new teammates, and they all must learn a new offense. It certainly won't be the typical learning process: The coronavirus pandemic has prevented NFL teams from getting together and starting their offseason training programs.

No one knows when teams will be able to assemble.

McCoy said he met Jones during pregame talks when the Giants and Redskins played last season. They have spent a lot of time on the phone since he signed a one-year, $2.25 million contract late last month.

“His future is bright, his ceiling is high and he seems like a really great person,” McCoy said of Jones. “He’s obviously very lucky to have had a guy like Eli in the quarterback room.”

While teams can't get together, the NFL is allowing them to hand out playbooks to players under contract. Coaches will be teaching using mostly online tools.

McCoy expects the Giants to start the lessons Monday.

“I think right now, everybody is just really focusing on the health and wellness of our country,” he said. “I know the Giants are in constant contact with us, making sure we have all the things we need from a health standpoint. But again, I think there’s a lot of uncertainty. I think Monday is kind of the day where we’re going to get all of that and get going.”

McCoy also expects to spend a lot of time on the phone talking about the new offense with Jones and fellow quarterback Alex Tanney, who has spent the past two seasons on the Giants as a little-used backup.

With Garrett running the offense, McCoy expects it to be “quarterback friendly."

“There is value to playing for a coach that played quarterback, that played your position," McCoy said. “There are little things that pop up, and he sees the field the same way we do, and he understands. But he has an expectation of us to play at a high level and he knows how he wants his offense run.”

McCoy is entering his 11th NFL season. In his six years with Washington, he appeared in 12 games and made seven starts. That included two seasons when he was the backup to Kirk Cousins and never took a snap.

“The one thing that coach Judge and coach Garrett told me is that we watched all your tape for 10 years and you have started a ton of games in this league,” McCoy said. “You also have been a backup and when you were called to come off the bench you have always stepped in and won the game and played well and played up to a standard. We value that and that’s why we want you to come be here.”