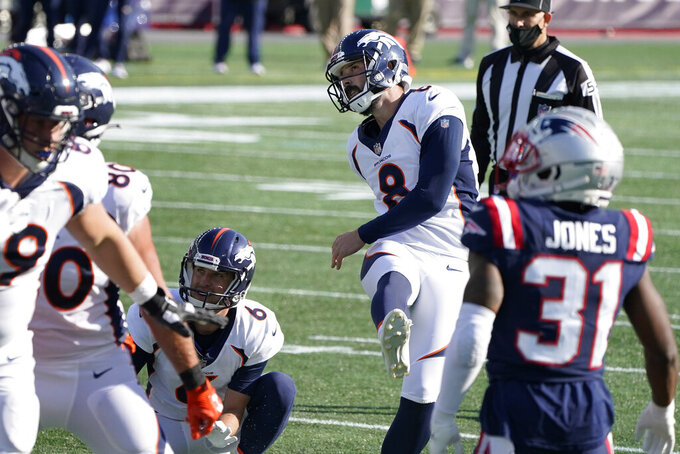 Denver Broncos place kicker Brandon McManus (8) follows through on one of his six field goals against the New England Patriots in the second half of an NFL football game, Sunday, Oct. 18, 2020, in Foxborough, Mass. (AP Photo/Steven Senne)

ENGLEWOOD, Colo. (AP) — Brandon McManus and his powerful right leg were benched for the New England game -- in quite a few fantasy football leagues, anyway.

McManus couldn’t resist a playful jab on Twitter after his franchise-best, six field-goal performance against the Patriots: “95.5% of fantasy didn’t play me. Shout out to the 4.5% who ride or die with me.”

From about midfield in, the Broncos (2-3) certainly have total confidence in “ McMoney" McManus, which he was jokingly called after recently inking a new deal. The reliable McManus has become a safety net for an injury-riddled offense that’s trying to get on track with QB Drew Lock back at the helm.

“He definitely allows us to take a deep breath,” said Lock, who returned from a sprained right shoulder in the 18-12 win over the Patriots on Sunday. ”(We) can call what we feel like and call what we want. That was kind of the game plan."

For McManus, his big day at New England was a years-in-the-making chance at redemption. He missed a 41-yarder off the right upright inside Gillette Stadium on Nov. 2, 2014.

Three weeks later, he was cut by the Broncos before being brought back to handle the kickoff duties.

“This place is special for me to kind of come back and perform like that,” said McManus, who signed a four-year, $17.2 million extension in September. “It’s always difficult to kick here in a stadium like this.”

McManus made it look like a breeze. He connected from 45, 44, 27, 52, 20 and 54 yards. It’s the sixth time he's made multiple field goals of 50 or more yards in a game, which ties Baltimore's Justin Tucker for most in NFL history.

McManus had a crack at a 57-yarder early in the fourth quarter, but the team elected to pass leading 18-3.

A calculated decision in the estimation of McManus.

“If I miss that, they get the ball at midfield and definitely the momentum," said McManus, whose team has won two in a row heading into a home game against Patrick Mahomes and the Kansas City Chiefs (5-1) on Sunday. "I really wasn’t itching at all to go out there.”

That’s in contrast to last season, when McManus had a sideline outburst after coach Vic Fangio called him back as he was preparing to attempt an NFL record 65-yarder at altitude.

But that decision by Fangio has only served to fuel him. McManus is 12 of 13 on field goals this season, including a 53-yarder to put Denver up for good late in the fourth at the New York Jets on Oct. 1. That helped net him AFC special teams player of the week honors, which he figures to be up for again.

“When we come out to practice, he wants to finish at 65 and 66 (yards), and I think it’s the right message to send because you really actually just send it to yourself,” special teams coordinator Tom McMahon said. “He wants to go big and he wants to kick from deep. His Achilles has been 50-plus yard kicks in his career and he’s attacking it and we really like it.”

McManus isn’t your ordinary kicker. He doesn’t even think of himself as a kicker, but simply as an athlete. One of his close friends on the team is pass rusher Von Miller, who is sidelined with a dislodged tendon in his left foot.

“We both want to be the most successful athlete ever at our positions,” McManus said. “I never want to be looked at as a kicker and I never act like a kicker because that’s not my personality."

Granted, the six field goals were nice, but the Broncos are looking for more production. They were 0 for 2 in the red zone against New England.

“We’re going to have to work harder at finishing our drives," Fangio said. "Usually that can come back to bite you and if we hadn’t held on there then it would have bitten us. They proved to be enough to win the game and right now that’s all we need.”

Fantasy football tip: May not want to bench McManus.

By Dennis Waszak Jr. 5 minutes ago
By John Wawrow an hour ago
an hour ago
By Josh Dubow 10 hrs ago
13 hrs ago