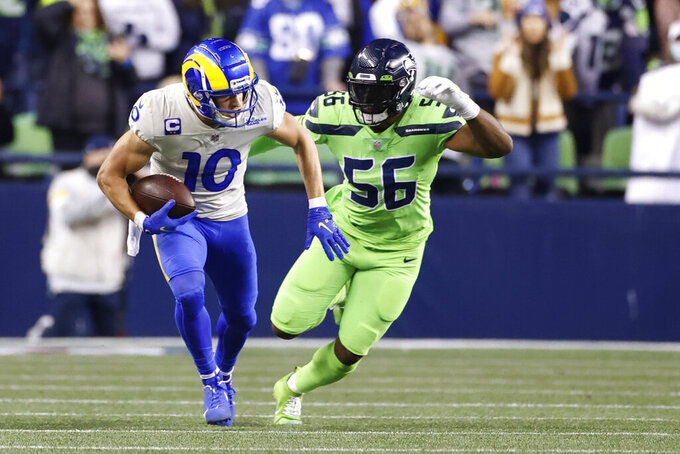 OPENING LINE: Rams by 10½, according to FanDuel SportsBook.

TURNOVER DIFFERENTIAL: Rams plus-1; Giants plus-1.

RAMS PLAYER TO WATCH: Matthew Stafford. Quarterbacks have been having a field day against the Giants this season, so Stafford might have another following Dak Prescott and the Cowboys. Stafford is certainly enjoying the West Coast. In five games, he is 117 of 172 for 1,587 yards, 12 touchdowns and two interceptions. He has at least two TD passes in four of the five games.

GIANTS PLAYER TO WATCH: Kadarius Toney. First watch to see if the receiver starts. He was ejected last weekend for throwing a punch and coach Joe Judge may discipline him by not starting him. The elusive first-round pick had a team rookie record against Dallas with 10 catches for 189 yards.

KEY MATCHUP: Giants quarterbacks against the Rams' defense. No matter who plays for New York, he will be at a disadvantage. If Daniel Jones clears the concussion protocol, he will have very little practice time and is not likely to run, one of his big weapons. If Mike Glennon plays, the Rams are seeing a veteran who doesn't run and who will be under pressure from an LA pass rush that has 14 sacks. With RB Saquon Barkley likely out, Los Angeles is going to face a one-dimensional offense: the passing game. Look out.

SERIES NOTES: The Rams have beaten New York in their last two meetings, including a 17-9 win last year that was most memorable for Rams DB Jalen Ramsey's postgame fistfight with now-departed Giants WR Golden Tate, the uncle of Ramsey's two children. LA wrapped the game up with a fourth-quarter, 55-yard TD catch by Cooper Kupp. The Rams won the last meeting at MetLife Stadium in 2017 behind four TD passes by Jared Goff. The Giants had won the seven previous games.

STATS AND STUFF: The Rams go for their third straight road win. They are 5-3 in games when they have had nine or more days off. The Rams are also 25-11 away from Los Angeles during McVay's 4 1/2 seasons in charge. ... Stafford threw for 365 yards against Seattle. It was his 52nd career 300-yard game. With the Lions, he had 342 yards passing, three TDs and an interception in his last start (2019) against the Giants. ... RB Darrell Henderson is looking for his third straight road game with a rushing touchdown. ... WR Robert Woods had a season-high 12 catches for 150 yards against Seattle. ... TE Tyler Higbee has a TD catch in two of his last three games. ... DL Donald broke the Rams record for career sacks when he picked up No. 88 1/2 against Seattle. It was his 14th against Russell Wilson. ... Donald had a sack, forced fumble and a recovery against New York last year. ... LB Leonard Floyd has a sack in three of his last four games. ... LB Troy Reeder is the Rams' unlikely interceptions leader after getting one in each of their first two road games. ... New York is 0-2 at home. ... The New York offensive line did not allow a sack in the last two games. ... Jones ranks third in the league among quarterbacks with 197 yards rushing. ... RB Devontae Booker had 42 yards rushing and a TD and 16 yards receiving and a TD last week after Barkley left early with a sprained left ankle. ... Toney’s 189 yards were the most by a rookie since Juju Smith-Schuster of Pittsburgh had 193 in 2017. ... Shepard has a touchdown catch in two of his last three outings at home. ... TE Evan Engram had six catches for 70 yards and a touchdown in the last home meeting. ... Logan Ryan leads all defensive backs with 42 tackles this season ... CB James Bradberry is one of four NFL DBs with at least one pass defended in all five games. ... DL Austin Johnson has a career-high three sacks this season. He had 3½ in his first five seasons.

FANTASY TIP: Kupp. The 2017 third-round pick is third in the NFL with 523 yards receiving this season. His 37 catches are tied for second behind Davante Adams (42) of Green Bay. He is aiming for his 10th straight game with at least five catches. The Giants' defense is ranked 29th overall.