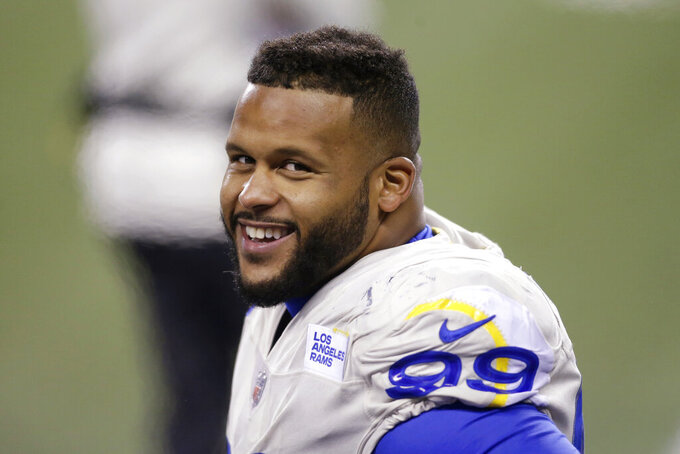 Los Angeles Rams defensive end Aaron Donald smiles as he stands on the sideline late in the second half of an NFL wild-card playoff football game against the Seattle Seahawks, Saturday, Jan. 9, 2021, in Seattle. (AP Photo/Scott Eklund)

LOS ANGELES (AP) — All-Pro defensive tackle Aaron Donald is expected to play for the Rams on Saturday in Green Bay after injuring his ribs in Los Angeles' playoff victory at Seattle.

Rams coach Sean McVay also said Sunday night that quarterback John Wolford and receiver Cooper Kupp are likely to be available for Los Angeles (11-6) against the Packers despite getting hurt against the Seahawks.

McVay said he doesn't expect to name a starting quarterback this week for the Rams' showdown with the top-seeded Packers (12-4), preferring to wait until game day for the second straight week.

Wolford left Lumen Field in an ambulance after getting hurt early in his second career start while taking a low hit to the head from Seattle's Jamal Adams. Wolford's injury turned out to be a stinger, and he returned to the stadium for the postgame celebration.

Longtime starter Jared Goff took over and led the Rams to the win, but went 9 for 19 less than two weeks after undergoing surgery on his right thumb.

“It affected him yesterday,” McVay said. “If you watch the game, it did. It might not have been painful, but it was something that he did a great job battling. There were things he's typically able to execute where it seemed like (the thumb injury) was a factor.”

McVay said he expects both quarterbacks to be available in Green Bay, but he will monitor their progress before deciding on a starter.

The coach also said the Rams are much more likely to have a third quarterback active against the Packers after Los Angeles had only two in uniform in Seattle. Veteran Blake Bortles and rookie Bryce Perkins are the Rams' other two quarterbacks.

McVay was vague on the details of Donald's injury, which occurred in the second half of the Rams' 30-20 victory when he pulled Russell Wilson down onto him during a tackle in the third quarter. Donald left the game and went to the locker room, but eventually returned to watch the Rams' win from the sideline.

“We'll be smart with him throughout the week,” McVay said. “He's going to do everything in his power to be ready to go. Don't expect that to affect his game status for this week.”

Donald had two sacks and three quarterback hits on Wilson before his injury.

Donald was a unanimous selection to his sixth consecutive All-Pro team last week. He also earned his seventh consecutive Pro Bowl selection during another dominant season in which he finished second in the NFL with 13 1/2 sacks.

Kupp, the Rams' leading receiver, left the game in Seattle early after taking a hit to his knee, but the injury turned out to be bursitis. Kupp's knee swelled after the hit, but is doing much better, McVay said.

Rams left guard David Edwards also left with Achilles tendinitis. He will be monitored throughout the week, but Bobby Evans will make his first start of the season if Edwards can't play. Evans started seven games as a rookie last season, and he performed well in Edwards' place in Seattle.