McVay: Rams' untimely blowout loss was as bad as it looked 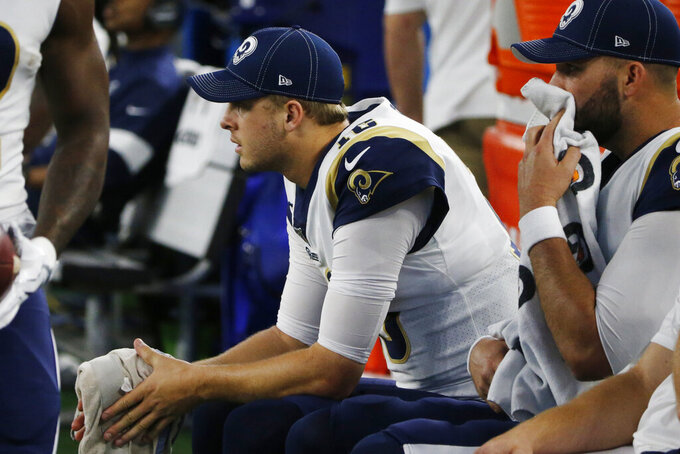 Los Angeles Rams quarterback Jared Goff (16) sits on the bench in the second half of an NFL football game against the Dallas Cowboys in Arlington, Texas, Sunday, Dec. 15, 2019. (AP Photo/Michael Ainsworth) 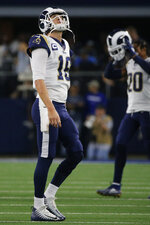 THOUSAND OAKS, Calif. (AP) — After a day of analyzing film and thinking about it, Sean McVay came to an unlikely conclusion about the Los Angeles Rams' blowout loss in Dallas.

It was just as bad as it looked.

That's usually not the case for the ever-optimistic McVay or most football coaches, who can typically find positives and mitigating factors in even the most ignominious defeats.

But the third-year coach of the Rams (8-6) saw nothing new to like about a 44-21 loss that all but wrecked the defending NFC champions' playoff chances. Even with the urgent motivation of a playoff race, Los Angeles was dominated on both sides of the ball by a previously struggling. 500 opponent.

“It wasn't very good,” McVay said Monday. “In a lot of instances, it's never as bad or as good as you think, but a lot of the things that we felt like after the game showed up (on film). The expectation and the confidence that I do have in our players and in our team to be able to execute and just do the fundamental things that you have to be able to do in this league, we really just didn't do.

"That's not the norm for us. I don't expect that to be a theme for us as we finish out and move forward.”

The question of why Los Angeles performed terribly in this marquee game will linger into the offseason — which is likely to arrive before the new year, thanks to this flop. After two blowout losses in the last four weeks, the Rams' playoff hopes are down to a flicker.

McVay cited everything from the Rams' poor tackling to their disappearing running game as reasons for their woes. Los Angeles hasn't maintained consistency in any area this season after doing so many things so consistently well under McVay.

“It’s not us,” Rams defensive lineman Michael Brockers said. “Everything that’s on film, that’s not what we believe in. But it was their day. Everything kind of just bounced their way. ... It’s not going to be your day sometimes, and that’s what it was. You just felt like it."

The Rams still have playoff chances, but they're slim: They would have to beat San Francisco and Arizona to close the season while the Minnesota Vikings lost at home to Green Bay and Chicago.

They don't have much time to stew on the embarrassment in Dallas: The Rams must go right back to work Tuesday to prepare for their visit to face the playoff-bound 49ers (11-3) on Saturday night.

“That’s the beauty of having a week like this, a quick week," Brockers said. "You can just forget about this game and just focus in on a divisional opponent that we know and we feel like we can come out and get a victory over.”

Tight end Tyler Higbee produced another week of huge numbers. He had 12 catches for 111 yards against the Cowboys, setting a career high in receptions and barely missing a third straight week with a new career high in yards receiving. Higbee seems likely to be a major part of the passing game plan even when Gerald Everett, McVay's previously preferred tight end target, returns from injury.

The running game disappeared again, and the Rams are out of chances to fix this wasted year for Todd Gurley. The $60 million running back had 11 carries for 20 yards in Dallas, and his two backups never even touched the ball. McVay's inability to create an effective running game is shocking after Gurley's success in the past two seasons.

Punter Johnny Hekker might have been the Rams' best performer in Dallas, which says plenty. He averaged 55.8 yards per punt, including a 67-yarder that pinned the Cowboys on their 3. Hekker also completed a 5-yard pass for a first down, showing off his high school quarterback arm.

Cornerback Darious Williams had a bumpy ride when an injury forced him into playing 61 snaps, but he could have a prominent role again this week after starter Troy Hill broke his right thumb and had surgery. Hill might still play, but Williams is ready to work. “Obviously we want Troy to be back,” Williams said. “He’s one of our leaders, especially in the secondary. But if he needs time to heal, that’s why I’m here, so I’ll be ready.”

Jared Goff bruised his thumb when he hit it on left tackle Andrew Whitworth's helmet, but McVay is optimistic the injury won't affect his quarterback. Kicker Greg Zuerlein also strained his right quadriceps in Dallas. McVay isn't sure whether the Rams will have to sign a kicker.

1,031: Cooper Kupp's yards receiving after his six catches for 41 yards in Dallas. The third-year receiver hit a new milestone in his remarkable comeback season, but he wasn't involved enough: five of those catches came after the Cowboys had taken a 37-7 lead.

The trip to Santa Clara is a chance for the Rams to salvage some self-respect from this disappointing finish while throwing a wrench into their California rivals' playoff plans.