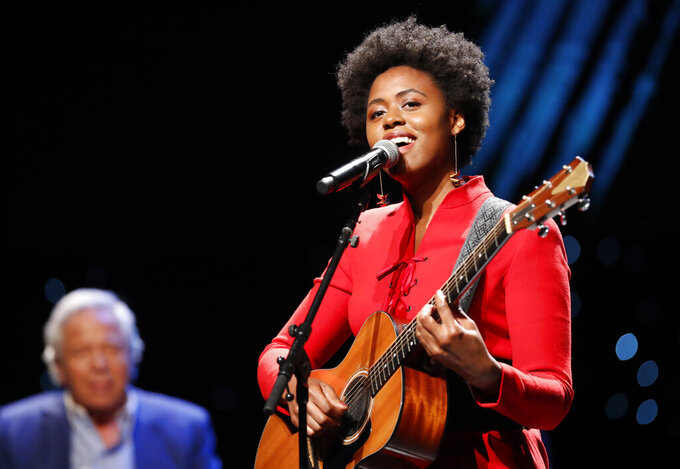 NEW YORK (AP) — A coalition of big names in sports and entertainment pledged their high-profile platforms and $50 million on Wednesday at the launch of an organization that will lobby for changes to state probation and parole laws.

Rapper Meek Mill, whose well-publicized prison sentence for minor probation violations became a lightning rod for the issue, was joined at a New York City news conference by fellow rapper Jay-Z and the owners of the Philadelphia 76ers, Brooklyn Nets and the Super Bowl-bound New England Patriots to announce the formation of the Reform Alliance.

"I'm here to speak for all the people who don't have a voice," Mill said, who remains on probation until 2023, and actually had to get permission to attend the event to avoid getting another violation. He pointed out that his original arrest and conviction was over a decade ago.

Mill became a symbol for criminal justice reform activists after a judge in Pennsylvania sentenced him to 2-4 years in prison for minor violations of his probation conditions in that decade-old gun and drug possession case. He spent months in prison before a court ordered him released, with visitors like Robert Kraft, the Patriots owner and Michael Rubin, co-owner of the 76ers.

The current system "is not good for America," Kraft said. "We can make America better if we really cure this problem."

The Reform Alliance will be led by Van Jones, a CNN host and activist who at one point served as an adviser to former President Barack Obama.

About 2.2 million people in the U.S. are incarcerated, and about 4.5 million are on probation or parole, according to government statistics.

Jones said the Reform Alliance is taking aim at the cycle of probation and parole violations that leads people back to prison.

He said the efforts would be toward educating the public and legislators about how people are impacted, how minor issues like missing an appointment can have huge repercussions, in an effort to swing momentum toward legislative policy change. He said the organization's efforts would start in Pennsylvania and New York.

Jay-Z said that he has seen this issue impact a lot of people and their families throughout his life.

"For us, this is how we grew up," he said. "We're all prisoners to this, until everyone's free, no one's free."