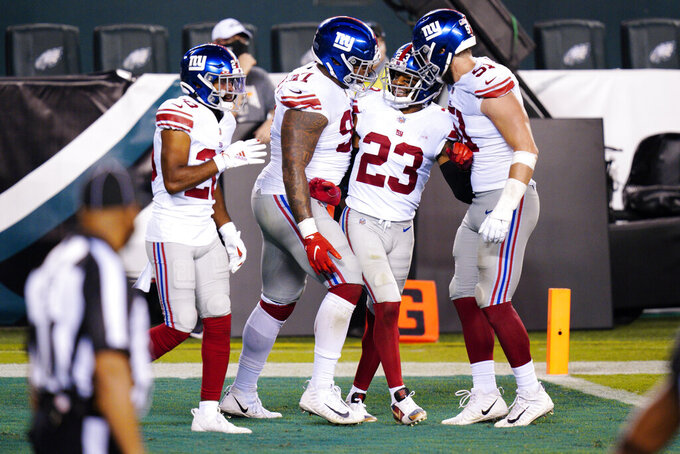 New York Giants' Logan Ryan (23) celebrates with teammates after the Giants forced a turnover on downs during the second half of an NFL football game against the Philadelphia Eagles, Thursday, Oct. 22, 2020, in Philadelphia. (AP Photo/Chris Szagola)

The former quarterbacks, two-time Super Bowl-winning brothers and close mates with Kenny Chesney, kicked off the “Poets & Pirates DJ Sessions” this week on the singer's SiriusXM channel, No Shoes Radio.

In addition to spinning the songs, the Mannings told stories about their personal meanings, as well as about their long-time friendships with Chesney. Peyton unearthed “Whatever It Takes” from a United Way-benefit NFL country music CD that became a duet of the first song Chesney ever heard himself sing on radio. Eli talked about the lasting resonance of “Boys of Fall,” Chesney's tribute to youngsters playing what has become America's game.

There's even Peyton revisiting “Me & You,” the song Chesney sang at his wedding reception.

“The Mannings have been in my life since I was on Capricorn Records and Peyton was playing for UT," Chesney says of Peyton's days for the Volunteers. "He came onstage when we played Neyland Stadium, sang ‘Back Where I Come From’ with us... and Peyton and Eli just know what all these songs are about. So, to kick off something so personal and, honestly, so much fun, who better to start with than my old friends?

“Everybody wants to be the deejay,” adds Chesney, who notes “you know I’m a music man, I grew up in East Tennessee” in his song “Out Last Night.”

“I figured I can let my friends come over and play. Let them share the songs that are meaningful and stories from their lives. I view No Shoes Nation as the world’s biggest group of friends, and I like to think everyone knows everybody else – at least in spirit. So, when we decided to do this, I figured: ‘What a great way to get to know some of my best friends a whole lot better.’”

There has always been a bond between athletes and trainers, and the one New York Giants defensive back Logan Ryan has with assistant athletic trainer Justin Maher might be even tighter after what happened Monday night.

Ryan hurt his hip against the Tampa Bay Buccaneers and was late leaving MetLife Stadium because of treatment. He was on a telephone call with his wife, Ashley. who had gone to Florida to vote and check on their home. She was having severe stomach pain but told her husband she would wait until the morning check it out.

Ryan talked to Maher and he said she needed to get to an emergency room. She went and doctors diagnosed an ectopic pregnancy, which happens when a fertilized egg grows outside a woman’s uterus, most likely in a fallopian tube.

“She ended up going into emergency surgery, that’s what I’m dealing with right now,” Ryan said. “They ended up saving her and ended up preventing a lot of what could have been done. That was a trainer on our team, Justin Maher, telling my wife to go to the ER at 1 a.m. and could have saved her life or saved a lot of internal bleeding there.”

The following day, rookie coach Joe Judge told Ryan if he needed to be with his wife to go and forget about football. He stayed with the team and practiced for Sunday’s game against Washington.

“That’s who Joe is as a man and as a coach. I know we care about X’s and O’s and winning and losing, but there are really good people here. That’s why I came here,” said Ryan, who signed with the Giants as a free agent before the start of the season.

NOT IN A BUBBLE

The Detroit Lions were one of 16 NFL teams that made facilities available for local officials to conduct election-related activities. Jamal Agnew and Miles Killebrew, special teams standouts for the Lions, greeted volunteers virtually at Ford Field on Election Day. Agnew and Killebrew were seen and heard through an iPad attached to a robot as they communicated with men and women, who double-checked voting results from precincts in Detroit.

The next day, Killebrew said every one in the team’s practice facility was well aware that they were in a battleground state. “In between meetings, we’re checking our phones — especially here in Michigan,” Killebrew said hours before Democrat Joe Biden won the state.

Mike McCarthy grew up in Pittsburgh during the height of the Steelers-Cowboys rivalry in the 1970s. Now he will face his hometown team for the first time in his first year as Dallas coach Sunday.

“I don’t know of anybody that wasn’t attached,” McCarthy said. “I think it’s very similar here in Texas with the Cowboys. I wasn’t fortunate enough to really go to many games, but we always, every Sunday, you’re in front of the TV watching those great ’70s teams playing.”

McCarthy said it seemed he was watching the Cowboys just about every Sunday because Dallas games would follow Pittsburgh games in the later time slot. And that says nothing of the two times they met in the Super Bowl in the 1970s, the Steelers winning both.

“You remember just the saltiness of the rivalry,” McCarthy said. “Obviously remember Jackie Smith not catching the ball in the end zone, what a big play that was. Any time the Steelers and Cowboys played it was always a big game.”

The Steelers are 7-0 for the first time since the 1978 season McCarthy just referenced. Pittsburgh beat Dallas 35-31 to finish that season. Smith’s drop kept Dallas from pulling even at 21, and Pittsburgh later went ahead 35-17 on Terry Bradshaw’s touchdown pass to Lynn Swann before the Steelers hung on.

McCarthy said linebacker Jack Lambert was his favorite player. He also said any issues of a family conflict disappeared more than two decades ago when he was an assistant in Kansas City.

“A few funny stories we can maybe tell at a later date, but no, there’s no conflict at all,” McCarthy said. “It speaks to just the people back there and I found it a very similar vibe here in Dallas with the Cowboys.”

McCarthy lost all three regular-season meetings with the Steelers in 13-plus seasons in Green Bay. But he won the most important game. The Packers beat the Steelers in the Super Bowl at the home of the Cowboys to finish the 2010 season.