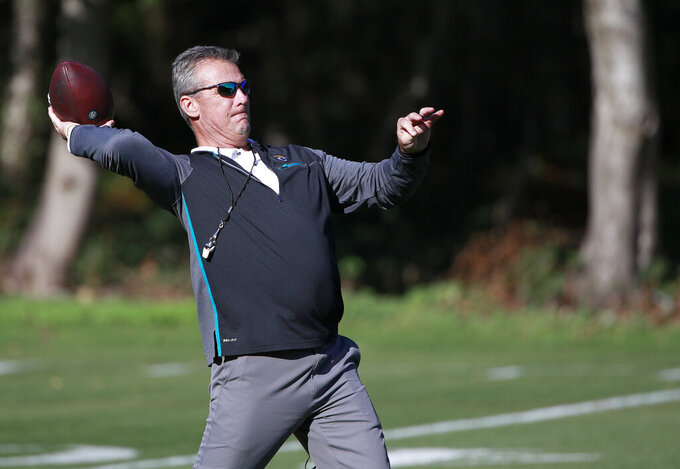 Jacksonville Jaguars head coach Urban Meyer throws the ball during a practice and media availability by the Jacksonville Jaguars at Chandlers Cross, England, Friday, Oct. 15, 2021. The Jaguars will plat the Miami Dolphins in London on Sunday. (AP Photo/Ian Walton)

“We’re going to get used to doing this a bunch,” Meyer said before quickly changing directions.

Even though he was 4,250 miles from home and playing his first game in London, Meyer reminded everyone in the room that there’s a bigger goal for the floundering NFL franchise.

Despite all the headaches Meyer has caused the Jaguars (1-5) in just nine months on the job — a botched hiring, a hefty fine for breaking offseason rules, a bogus quarterback competition, an NFLPA investigation and a public reprimand from owner Shad Khan for “inexcusable” behavior at an Ohio bar — the coach’s plan to provide players the “best of the best” has the small-market team headed in a new and potentially game-altering direction.

Most would agree it’s overdue for a franchise that has been a laughingstock for the better part of the past decade.

Jacksonville has long planned to upgrade its aging stadium and the area surrounding TIAA Bank Field. But Meyer, a three-time national championship-winning coach, is proving to be the catalyst for change.

He all but demanded facility improvements before agreeing to leave his role as a college football analyst and returning to the sideline in January.

Khan responded in June by unveiling plans for a $400 million development in downtown Jacksonville. City council members voted unanimously (17-0) last week in favor of the agreement, which would allow Khan to build a Four Seasons Hotel and Residences, office complex and marina facilities. The city plans to subsidize the project built on land known as the Jacksonville Shipyards with more than $100 million in tax dollars.

Khan pledged at least $301 million for the project, bringing his total investment since buying the team in November 2011 to a little more than $500 million.

“I’m really, really excited about downtown,” Jaguars president Mark Lamping said. “I know Shad is just thrilled because his commitment to downtown is absolute and this is such a huge step.”

The Jaguars expect the venture to draw more people to the area for work, entertainment and football games. Jacksonville ranks near the bottom of the league in attendance and plays annually in London to boost local revenue.

Khan has spent a decade working to improve Jacksonville and its facilities. He funded locker, weight and training room overhauls as well as sharing costs to install supersized scoreboards and build an indoor practice field and adjoining amphitheater. He also led the push to get stadium club sections revitalized.

He eventually wants to deliver a “stadium of the future” in Jacksonville, which could mean a $500 million makeover that's likely to include covered seating around the entire venue. A revamped stadium could increase local revenue and eventually eliminate the need to play overseas.

The Jaguars are among a handful of NFL teams that run their entire operation from their stadium. Meeting rooms and offices are all located in the bowels of the nearly 30-year-old venue. It surprised Meyer, who had visited the stadium six times as part of the annual Florida-Georgia series. But he had no idea much needed to be done for Jacksonville to be on the same footing as other NFL teams.

Drafting quarterback Trevor Lawrence was the first piece of the puzzle.

“I am a big dreamer and I believe that this should be one of the destination places in the NFL," Meyer said this week. "This area is unbelievable and this stadium is fantastic. There is a lot of narrative out there that I do not believe. I believe players will want to be here, especially when we build this place up the way we want to build it.

"It is obviously in the state of Florida and you got the ridiculous fans here that want to win so bad and we have a (great) owner and a quarterback. We are going to get this going.”