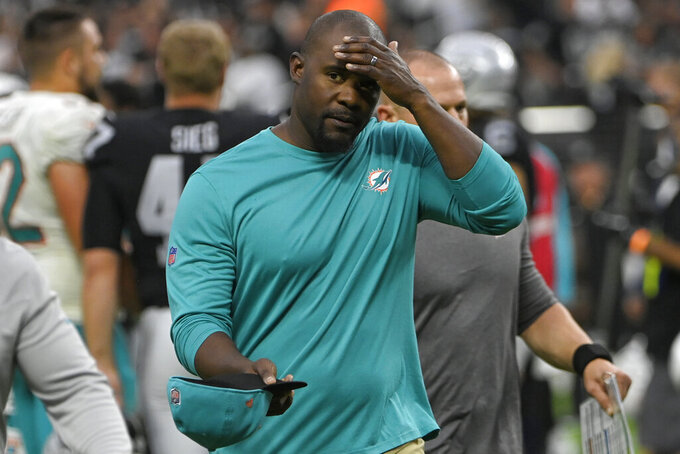 MIAMI GARDENS, Fla. (AP) — The play absolutely epitomizes how things are going for the Miami Dolphins on offense. Quarterback Jacoby Brissett dropped back and threw the ball across the field to wide receiver Jaylen Waddle, who caught it and was immediately tackled.

Even when things seem to go right for Miami these days, they’re not really going right. The safety was among the turning points in the Dolphins’ 31-28 overtime loss to the Las Vegas Raiders on Sunday, a game where Miami led 14-0 before that baffling play.

The Dolphins fell to 1-2 with the loss, meaning they have a better record than only three teams in the AFC.

“Sometimes it doesn’t always come together right away. Sometimes it does,” Dolphins running back Malcolm Brown said Monday. “It’s a long season and I’m definitely still very confident in this team.”

The Dolphins entered Monday 29th in the NFL in yards per game, though a three-game sample size isn’t exactly enough to draw absolute conclusions. Only Chicago and the New York Jets have fewer points per game than the Dolphins, who are averaging 15 per contest so far.

Miami is outscoring opponents 6-2 on its own pass plays this season; one touchdown, one strange safety.

“I think every week you’re trying to create explosive plays offensively,” Miami coach Brian Flores said. “Once you get in the game, you have to take what they give you. Often times, most teams are trying to limit the big plays and you have to have good execution to create explosive plays. Every team wants them. We try to get them and we had a couple opportunities for them. We’ve got the ball downfield.”

The combined record of Miami’s next four opponents is 3-9 — Indianapolis and Jacksonville are 0-3, Atlanta is 1-2 and reigning Super Bowl champion Tampa Bay is 2-1. And only one of those four games is a true road contest; the Colts and Falcons come to Miami Gardens, the Dolphins go to Tampa Bay and the game with the Jaguars is in London.

DL Zach Sieler. A rare bright spot for the Dolphins on Sunday — and this season, really. He made back-to-back tackles on Las Vegas short-yardage plays to set up a turnover on downs that led to Miami’s second touchdown and the 14-0 lead, and wound up leading Miami with nine tackles on the day.

The entire offense, but specifically the passing game. Miami is averaging 5 yards per attempt (31st in the NFL entering Monday) and has one touchdown pass in 120 throws this season. The previous team to throw at least 120 passes in its first three games and manage only one touchdown was the 2007 New Orleans Saints, who turned the ball over 10 times in those games. The Dolphins have only four turnovers so far this season.

Waddle and TE Mike Gesicki. Hard as this is to believe, Sunday marked the first time that two Dolphins players had 10 or more catches in the same game. Waddle had 12 catches, Gesicki made 10. But to illustrate how much the offense is struggling right now, consider that those 22 catches went for a combined 144 yards — 27 of them on Gesicki’s fantastic fingertip grab on fourth-and-20 to extend the overtime drive.

All those involved in calling or executing the play that ended up as the safety. Throwing a screen to Waddle, who was inside his own end zone when he caught the ball, was simply baffling. Waddle had no chance on the play, getting immediately tackled for Las Vegas’ first points of the afternoon.

Starting QB Tua Tagovailoa will miss at least two more games with the rib fractures. WR Will Fuller was shaken up during overtime, though that was believed to be a cramping issue, and S Brandon Jones — who had two sacks — appeared to turn an ankle in the extra session but continued playing.

45: The Dolphins have 45 points in their first three games. Only nine Miami teams have had fewer at this point in a season. None of those nine finished with a winning record — the best of the bunch went 8-8 in 1980 — or made the playoffs.

The Dolphins (1-2) are back home on Sunday to take on the Indianapolis Colts (0-3). It’ll be a full football weekend in Miami Gardens; Hard Rock Stadium has a celebration of Don Shula’s life planned for Saturday, the first public ceremony honoring the former Dolphins and Colts coach since his death on May 4, 2020.