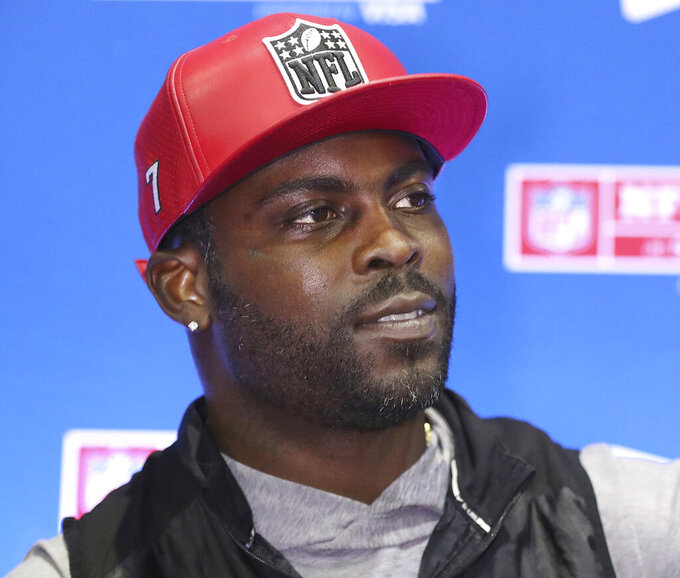 Former Falcons and Eagles quarterback Michael Vick signs autographs in the NFL Shop at the Super Bowl Experience in Atlanta in Jan. 31, 2019 file photo. Vick is working with the LeBron James-led political empowerment group More Than A Vote and the Florida Rights Restoration Coalition to help other former felons pay fines that are preventing them from voting. His journey is being chronicled in new documentary miniseries. (Curtis Compton/Atlanta Journal-Constitution via AP, File)/Atlanta Journal-Constitution via AP)

When former NFL quarterback Michael Vick went with some of his family members to try to vote in 2011, the former No. 1 draft pick who made a career on his elusive ability on the football field was sacked by news he didn’t expect: He wasn’t eligible.

“I found out because I had a felony on my record that I couldn’t vote,” Vick recalled in the first episode of the documentary miniseries by More Than a Vote, the political empowerment organization spearheaded by LeBron James. “That was just one of the things I did not know was taken away from me once I was incarcerated and got a felony on my record.”

“Vick Votes: A More Than a Vote Vlog” chronicles Vick’s journey as he navigates the voting rights restoration process. It's the latest initiative by the group, which also is helping with the procurement of arenas as early voting sites, particularly in states in which access to voting venues and early voting have been restricted.

Vick's 2007 conviction for running a dogfighting operation sidelined him for two seasons in the prime of his NFL career. It also took away a right that Vick says he doesn’t want to see permanently stripped from what the American Civil Liberties Union estimates is 774,000 people in Florida who can’t vote because of outstanding unpaid fines and fees.

“It’s not an easy process to have your voting rights restored or retained,” Vick says. “You just have to take the initiative and be proactive.”

He began his journey by connecting with Florida Rights Restoration Coalition executive director Desmond Meade, who successfully led the push in 2018 to pass Amendment 4 in Florida to restore the voting rights of most people with felony convictions, the exception being those convicted of murder or a felony sexual offense.

But soon after, the Florida Legislature passed a measure requiring former felons to pay off any outstanding fines and court fees before having their rights restored. The FRRC likens it to a modern-day poll tax and has since partnered with More Than a Vote to raise money to get those fines paid.

Several former athletes and entertainers have joined the effort. And former New York Mayor Michael Bloomberg recently contributed $16 million to help the FRRC reach its $25 million goal to get fines paid so ex-felons can register by Florida’s Oct. 5 deadline to vote this November.

Vick said he was so focused on trying to become a professional athlete growing up that he was oblivious to both voting rights and how a criminal conviction could affect it.

“At a young age I would have loved to, because I know it would have made me a better person,” he says. “Maybe I would have thought different or looked at the world different. … I’m not one of one, but I’m one of many.”

Meade himself spent time in prison for a drug conviction before getting released in 2005 and earning a law degree. He knows firsthand the barriers facing so many people like him and said part of his efforts also go to helping lessen the stigma of what it means to be a formerly incarcerated person.

“Some people call them ‘formerly incarcerated people.’ In Florida we just say ‘returning citizens,’” Meade says. “If people can call you a felon, they can treat you differently. We deserve to be treated with dignity and respect and the best way you get it is by making your voice heard. And we can just change so much with it.”

Vick has since paid all his outstanding court costs and restitution in his case and concludes the first episode of the documentary by filling out his Florida voter registration.

“Being blessed and having an opportunity to live a different life, it wasn’t a big concern for me as far as the finances to be able to pay fines,” Vick says. “Some of these fines are just thousands and thousands of dollars. Money that people don’t have or can’t generate. It’s unfortunate that if you don’t have it, you don’t get it.”