Mike Purcell not getting comfy in his late bloomer success 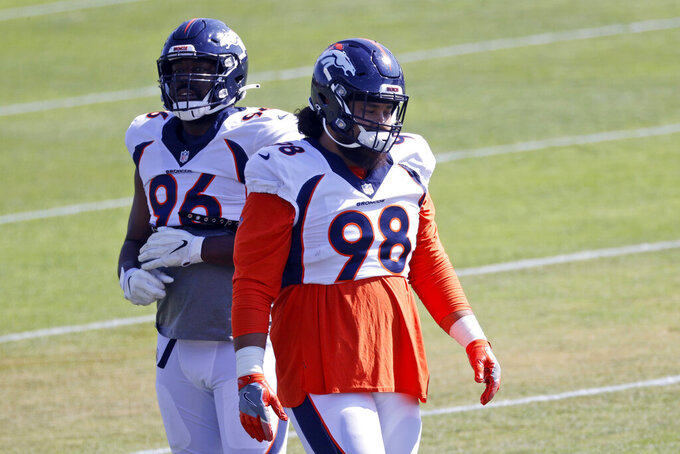 ENGLEWOOD, Colo. (AP) — Vic Fangio approached nose tackle Mike Purcell recently and wondered how it felt for the 29-year-old journeyman to finally have a starting job and an established role after getting cut nine times in his career.

“I told him my mentality’s not going to change,” Purcell recounted of his conversation with his head coach last month.

“I’m going to fight the same way I did every single year. As soon as you feel like you get complacent (that’s) when things can turn for the worse. I’ve battled through hell and back, so I’m just going to keep my mentality the same way.”

Purcell salvaged his career last year in Denver, where he played in 13 games and started seven, posting a career-best 48 tackles and solidifying the Broncos’ run defense.

At their season-ending news conference, both Fangio and general manager John Elway praised Purcell as one of the team’s biggest surprises, and in the offseason Purcell signed a one-year, $3.259 million deal that dwarfs his career earnings of $2.298 million.

Purcell, who grew up in Highlands Ranch, Colorado, not far from the Broncos headquarters, went undrafted out of the University of Wyoming in 2013 and spent that season on San Francisco’s practice squad.

Then, he spent two years just trying to win another job on Sundays.

In 2017, he spent time on the practice squads of the Bears, Patriots and Chiefs and he spent 2018 out of football completely after getting cut in camp by Kansas City.

Before signing with Denver in 2019, he played for the Salt Lake Stallions of the ill-fated Alliance of American Football.

So it’s easy to see why he always has his guard up, even as the Broncos’ incumbent nose tackle.

“It feels good as long as they know that I can play football," Purcell said. "I’m going to give them everything I can, and I’ll play as long as I can. I’m just happy to be here.”

Fangio sounds just as excited about having Purcell back as he does about getting defensive lineman Jurrell Casey in a trade with Tennessee and about the return of pass rusher Bradley Chubb from a knee injury.

“I think Mike should be able to improve,” Fangio said. “It’s the first time, last year, that he had that much playing time in the NFL. He did well with it, but now that he’s been able to watch and study himself in the offseason and now has the knowledge that he’s one of us and he’s got a job for the first time in his career — provided he plays the same that he did last year — I think we should see some improvement with him.

“I see his role being very similar to what it was last year. Obviously, he’s our nose and base. We mix him in there some on nickel on the early downs. When it’s still a run-pass situation, first-and-10, second-and-medium or less and we’re playing nickel he’ll be in the game some too.”

UNDER-THE-RADAR UPGRADE: The Broncos' biggest upgrade might be at punter, where they replaced the inconsistent Colby Wadman with eighth-year pro Sam Martin, who spent his first seven seasons in Detroit.

“Yeah, I like Sam. Sam’s an experienced punter. He’s had good success in the league,” Fangio said. “And even though he is experienced, he really should be entering the prime of a punter’s career. And he’s got good versatility in the different ways he can kick the ball. He’s a good holder, which is important. And we’re happy to have Sam.”