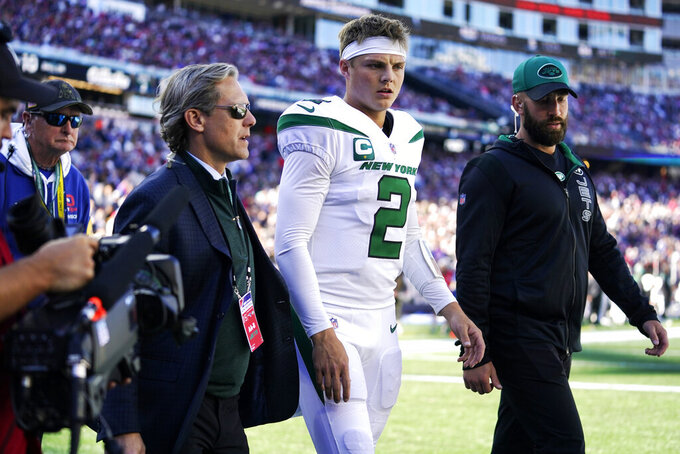 New York Jets quarterback Zach Wilson (2) is escorted to the locker room after an apparent injury during the first half of an NFL football game against the New England Patriots, Sunday, Oct. 24, 2021, in Foxborough, Mass. (AP Photo/Steven Senne)

FLORHAM PARK, N.J. (AP) — The New York Jets will keep rolling with Mike White at quarterback for now. And maybe a while longer.

Coach Robert Saleh announced Wednesday the decision to start White against the Buffalo Bills on Sunday, with rookie Zach Wilson still recovering from a sprained knee ligament. Wilson, cleared to return to practice this week, was limited Wednesday while running the scout team.

“We had a feeling on Monday with Zach's knee that he's not fully ready to go,” Saleh said.

Saleh added the long-term decision at quarterback will be made “day to day,” raising the possibility White could continue to start even when Wilson has healed. That’s a departure from Monday, when Saleh said Wilson would start again when he is healthy rather than sit.

“There's value in both, but you also don't want to force one over the other,” Saleh said. "Mike has done a phenomenal job in presenting the ability where you're getting good football out of the quarterback. So, it would be one thing if you were throwing out a quarterback and he was just playing terrible and there's nothing to learn from.

“It's another thing when there's a quarterback that's giving you a clear blueprint on how this offense is supposed to be run.”

Saleh isn't concerned the situation could end up brewing into a quarterback controversy.

“I think it's going to happen organically,” he said. "If Mike does phenomenal, like we think he's going to do, that's not weird. That's awesome to me, in the sense that quarterback is a precious commodity in this league and we feel like we have four really good ones.

“I think it'll all take care of itself. We've just got to let it play out.”

It will be the third straight start for White, who left last Thursday night's 45-30 loss at Indianapolis with a bruised nerve in his right hand but is fully healthy now.

“Mike obviously got all his strength back, he feels good,” Saleh said. “No residual effects from Thursday, so we're going with Mike.”

White threw for 405 yards and three touchdowns in New York’s 34-31 victory against Cincinnati in his first NFL start on Oct. 31. He was selected the AFC offensive player of the week, and his jersey and game ball were sent for display at the Pro Football Hall of Fame in Canton, Ohio, after he set the NFL record for completions in a first start with 37.

“He also did a good job in the first quarter against Indianapolis, so he's putting out good tape,” Saleh said. “So there's also that obligation: If he's playing well and he's doing the things he needs to do to give him the opportunity to continue on that.”

Saleh said he, his staff and general manager Joe Douglas are focused on what's best for the team in every decision. And the coach also knows the goal — for everyone — is to win games.

That has been an issue for the 2-6 Jets, who saw Wilson struggle through most of his first six NFL starts before he sprained the posterior collateral ligament in his right knee in a game against New England on Oct. 24. The No. 2 overall draft pick in April has four touchdown passes and nine interceptions.

White, a fifth-rounder by Dallas in 2018 who has been cut multiple times throughout his short NFL career, already has five TD passes in his limited appearances this season.

“If Mike is playing phenomenal football, it is what is,” Saleh said. "You guys might call it a quarterback controversy or not, but I think I can pull up an article from every single one of you guys that talks about or has mentioned that the best thing for a young quarterback is to watch. So there's no harm in either way.

“We have the utmost confidence in Zach when he gets ready to play and he gets back on the football field that he's going to do a phenomenal job. His talent is undeniable. There's a great amount of growth that can happen, whether he's playing or not. Those are facts. Those are history proven, through the course of time.”

Joe Flacco, acquired from Philadelphia on Oct. 25, will serve as the backup to White on Sunday. Josh Johnson filled in when White went out against the Colts and threw for a career-best 317 yards and three touchdowns. But he has already been elevated twice by the Jets and would need to be signed to the active roster to play. He would then have to clear waivers in order to be re-signed to the practice squad.

“There's a numbers game,” Saleh said. "So with Joe, it's basically giving him an opp and he's been studying his butt off, too, the past couple of weeks.