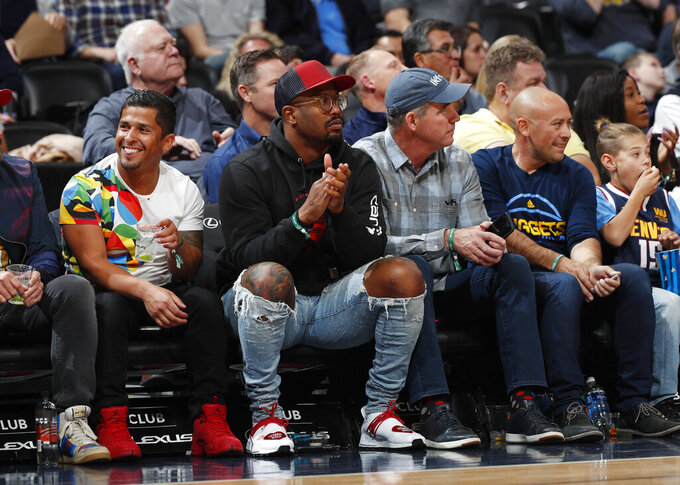 ENGLEWOOD, Colo. (AP) — It was just dinner, Von Miller insisted, even though his teammates called it so much more.

Rather than gather the team for a players-only meeting to empty their frustrations after another fourth-quarter collapse Sunday, Miller invited the entire team out to a steakhouse when the Broncos landed back in Denver following their 27-23 loss at Minnesota.

“I don't want to make it bigger than it was. It was just dinner with the guys," Miller said Thursday of the team-bonding evening that safety Will Parks called " one of the best things I've seen in all my football life."

They didn't gather to talk about their 3-7 record or their latest loss but to focus on the future and ponder how the future seems bright even if the present isn’t so rosy.

“I know a couple of guys talked about it and stuff and what it meant to the team, but for me, it was just dinner. The reality is, we're 3-7 and it's tough for us right now. We're just trying to keep the mood and the energy the way it was in the (upcoming) weeks,” Miller said.

Miller was unusually upbeat in the locker room after the Broncos squandered a 20-0 halftime lead and lost for the fourth time after leading in the fourth quarter. He said that’s because he can see this team starting to shake out of its doldrums.

"Honestly, simply the energy that we have, the type of players that we have and the type of coaches that we have," Miller said. "It's just a matter of time before we become a great team again. Great coaches and great players usually equal success. I'm still waiting for that.”

The Broncos' mood and comments this week contradicted a CBS Sports report Sunday that painted a picture of a team in turmoil with first-time head coach Vic Fangio not connecting with team and staff. Every player asked about that this week has disputed that notion, as have assistant coaches.

Suggestions that he and Fangio didn't get along are the "farthest thing from the truth," offensive coordinator Rich Scangarello said Thursday. "He's been great. He's helped me grow as a coach and I think everyone in this building respects him as a man and his leadership. We know we're going to win a championship under him. That's the goal and that's what we're fighting for."

The Broncos (3-7) visit the Buffalo Bills (7-3) next and Fangio said Scangarello won't have to adjust his game plan for QB Brandon Allen's third career start because of a spate of injuries along the O-line.

"No, we're hopeful that all three guys will play, so it won't impact that at all," Fangio said before his team practiced indoors because of wintry weather. Right guard Ronald Leary (shoulder/neck) was limited and center Connor McGovern (back) and left guard Dalton Risner (ankle) were held out again.

Notes: Fangio said C Davontae Harris will start against the Bills. He was replaced by Isaac Yiadom in the second half last week. ... It appears the Broncos will take at the rest of the month to evaluate rookie QB Drew Lock, who is eligible to be brought off injured reserve any time before Dec. 3. A day after saying he didn't think it was " vitally important " to get Lock into a game this season, Fangio responded, "probably not this week," when asked if he was considering promoting Lock to the active roster.