Miller has ankle surgery, Broncos get good news on Sutton 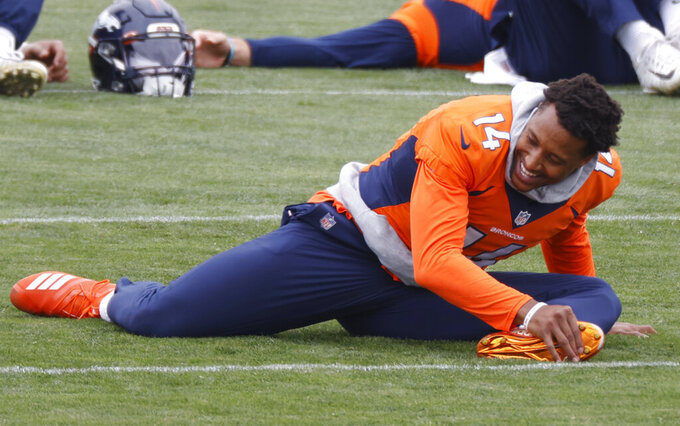 “I was told it went well, and we’ll see how it goes,” coach Vic Fangio said. “They haven’t said anything on a timetable based on his surgery, that will depend on the healing.”

Dr. Joshua Metzl, one of the team’s physicians, performed the operation at the Steadman Hawkins Clinic in suburban Denver.

Although the typical recovery time for a subluxed peroneal tendon is four to six months, the best-case scenario would be a three-month recovery.

Fangio said earlier this week that Miller will be “out for a while” and will go on injured reserve at some point but he has declined to characterize Miller's injury as a season-ending setback.

Because of the coronavirus pandemic and its effect on the NFL’s offseason, teams can bring an unlimited number of players off injured reserve this year once they are medically cleared to return.

Fangio said Miller’s injury, which occurred on the final play of practice, “was just a normal play, he rushed around the edge, he never hit the ground, never looked bad. If you saw the video, you’d think nothing happened, but it did.”

Defensive lineman Jurrell Casey said it was heartwrenching to lose Miller just before the start of the season.

“Having a player of his caliber and his leadership not be out there with us is definitely going to be a blow to the team. At the end of the day this business is about adapting to situations,” Casey said. “We’ve all been forced into having to adapt to something with the whole COVID that’s going on. It’s just another challenge and another hurdle we have to get over and come together as a team, as a unit and push forward and make sure that one, we win for this organization and we win for him also.”

Sutton sprained his right A.C. joint when he landed awkwardly after catching a high pass at practice Thursday.

“He won’t practice (Friday), but we think he will be limited (Saturday),” Fangio said. “He will be day to day.”

Fangio refused to say he felt snake-bit by injuries to his best offensive and defensive players this week.

“No, it’s part of everybody’s season eventually,” Fangio said. “Ours just happened, we endured two this week. We’ll be fine.″

Asked if his task is harder without Miller, defensive coordinator Ed Donatell replied, “Heck yeah. He’s a really good football player and it’s a terrible break for him and us. You listen to our players and they’re up for the challenge. We’re all going to fill in and we’re going to make this work. This happens in coaching, it’s part of the landscape. We’re ready to move forward.”

“Any time a player needs assistance on the field, you’re concerned as a coach,” offensive coordinator Pat Shurmur said. “We’ll just have to see where that goes. He’s a tough player. You never want to see a player get hurt, especially in practice and especially in a non-competitive situation like it was.”

Last year, Sutton caught 72 passes for 1,112 yards and six touchdowns while working with three different quarterbacks. He had 42 receptions for 704 yards and four TDs his rookie season.