Miller healthy in mind, body in comeback from ankle injury 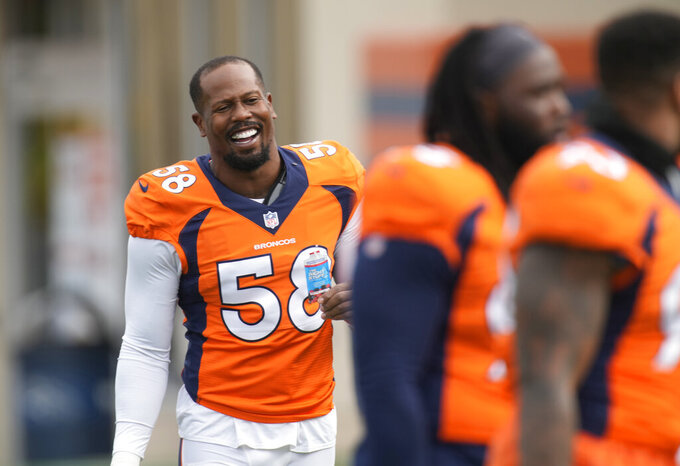 ENGLEWOOD, Colo. (AP) — Von Miller was so eager to race out to the berm overlooking the Denver Broncos' practice fields and fire up the crowd that he even dreamt about it before training camp.

“I had a dream the other day that I was running out from the facility, and I did the little clap like I always do,” Miller said. “That just reassured me that my mindset ... is where I want it to be.

"I just want to go out there and play football.”

Missing all last season with a freak ankle injury left the Broncos star linebacker with a new perspective as he heads into his 11th — and maybe final — season in Denver.

“I’m not really worried about this is the last year on my contract, will I be with the Broncos? Last year to be honest, that was really on my soul,” Miller said. “Of course I want to be here. I want to stay here for the rest of my career (but) getting past that is kind of like a release for me.”

In his first interview of camp, Miller used the phrase “at peace” 16 times to describe his state of mind as he embarks on his comeback that he sees as a springboard to the twilight of his career.

That's not to say Miller has lost any of his edge.

“Being at peace and being content, they’re two totally different things. I feel like you can be at peace with whatever happens, but you still want to go out there and lead the league in sacks, get Defensive Player of the Year, and do all this crazy stuff,” Miller said.

“But I’m honestly at peace with whatever happens. I think that comes with time. This is my 11th year in the league, I’ve done a lot of wonderful things on and off the football field. Last year I had all this stuff on my shoulders, beefing with (a local columnist) and this and that."

Now, he said, he's just enjoying being back in the locker room and out on the field with his teammates.

A year ago, Miller entered camp with a reshaped body and newfound perspective that grew out of a substandard 2019 season, his battle with COVID-19, Kobe Bryant's death and Michael Jordan's inspiring documentary.

These seemingly disparate factors led Miller to reflect on his leadership and his legacy and ultimately helped him reshape his psyche and physique heading into his 10th NFL season.

Then, just days before the opener, one misstep at practice ended his hopes of a big year. He underwent surgery and missed the entire season.

There was some speculation this spring that Miller's time in Denver was finished after John Elway, who had drafted him second overall in his first year as general manager, stepped aside. But new GM George Paton exercised the final year of Miller's contract, which will pay him $17.5 million.

Miller said he's not focused on his football future as he enters a contract year, however.

“I would like to keep playing, whether that’s here with the Denver Broncos or somewhere else, I’m totally at peace,” Miller said. “I want to play five to seven years and I have a son on the way. ... I really want him to be at an age where he can see me play, and he can know who dad is because you’ve got to prove all this stuff over again."

Miller, who hasn't reached the playoffs since his MVP performance led Denver to a win over Carolina in Super Bowl 50, raves about the roster Paton has put together.

There's the revamped secondary that features free agent cornerbacks Ryan Darby and Kyle Fuller, first-round draft pick Patrick Surtain II and returning safeties Kareem Jackson and Justin Simmons, both of whom were re-signed in the offseason, in addition to Bryce Callahan.

Miller is so impressed with that group that he figures it matters little whether Teddy Bridgewater or Drew Lock wins the starting quarterback job.

If they can stay healthy, Miller is confident the Broncos can end their five-year playoff drought.

“I really do believe this will be the year," he said. "I don’t know what the win column will look like, but we’re going to do some great things this season. We have too many pieces in place not to.”