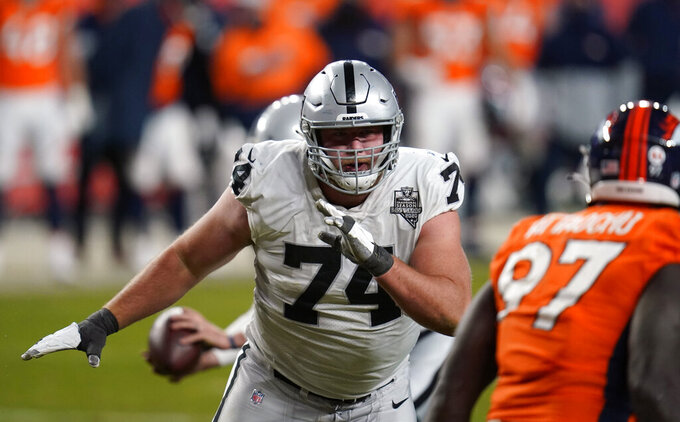 FILE - In this Sunday, Jan. 3, 2021 file photo, Las Vegas Raiders offensive tackle Kolton Miller (74) in the first second half of an NFL football game in Denver. The Las Vegas Raiders have agreed to a contract extension with left tackle Kolton Miller that will keep him locked up through the 2025 season. The deal reached Tuesday, March 30, 2021 was announced by Miller's agents at Octagon Football. The contract includes the 2022 fifth-year option and three additional seasons and is worth $68.7 million.(AP Photo/David Zalubowski, File)

Kolton Miller heard the criticism as he struggled through his rookie season in 2018 that the Raiders made a big mistake picking him 15th overall in the draft.

That injury-hampered rookie season when Miller was one of the worst pass-protecting tackles in the NFL was followed by two much more effective ones. That led to this week's move to make Miller the first member of his draft class to get a contract extension, which reportedly included $42.6 million guaranteed at signing and made him one of the league's better paid tackles.

“There was a lot of adversity my rookie season,” Miller said Friday after officially signing the deal that keeps him under contract through 2025.

“I struggled through injury and of course being a starter straight out of college. But I just took it day by day and improved as much as I can. I’m going to continue to improve, get stronger, improve my technique. It doesn’t stop here.”

Miller was the first draft pick made by coach Jon Gruden in his second stint with the Raiders. He struggled mightily as a rookie but has developed into a very dependable left tackle and will anchor the overhauled offensive line for years to come.

Miller played every offensive snap for 29 straight games starting in his rookie year and running until last season, when he missed two games with an ankle injury.

Miller has improved his play every season since being credited with allowing a league-worst 14 sacks as a rookie in 2018, according to game-tracking from SportsInfo Solutions. He cut that down to eight sacks in 2019 and just two allowed last season.

“I was actually surprised coming out of year three and going into year four," Miller said. “You dream about this when you’re a little kid and through the season. I’m definitely excited to continue my career here.”

Miller said one area where he wants to improve is generating more power and explosiveness in the run blocking so he can be as good at that aspect of the game as he is at protecting quarterback Derek Carr.

He'll also be asked to take on more of a leadership role on the line after the Raiders traded away high-priced veterans Rodney Hudson, Gabe Jackson and Trent Brown this offseason.

“I try to get together as much as I can with the younger guys,” he said. “I try to get in extra work. I try to lead by example and I just try to the best as I can to teach these guys and I think that was the biggest lesson I learned as a rookie, learn from the older guys. And I just took that and carried that to the younger guys."

One of those younger guys is one of Miller's old college teammates at UCLA, Andre James. The former undrafted free agent has the tough task of replacing Hudson, who has been one of the league's better centers in his six years with the Raiders.

James has started only one game in two seasons as a pro but Miller is confident he can perform on a full-time basis.

“That guy just came to work every day, picked up as much as he could from Rodney,” Miller said. “You can see he already had the footwork, already had the fundamentals, he just needed to fine tune some of the smaller stuff. He’s come along a great way.”

NOTES: The NFL announced that Raiders CB Nevin Lawson will be suspended two games without pay for violating the league's policy on performance-enhancing substances. Lawson will be eligible to practice and play in the preseason.