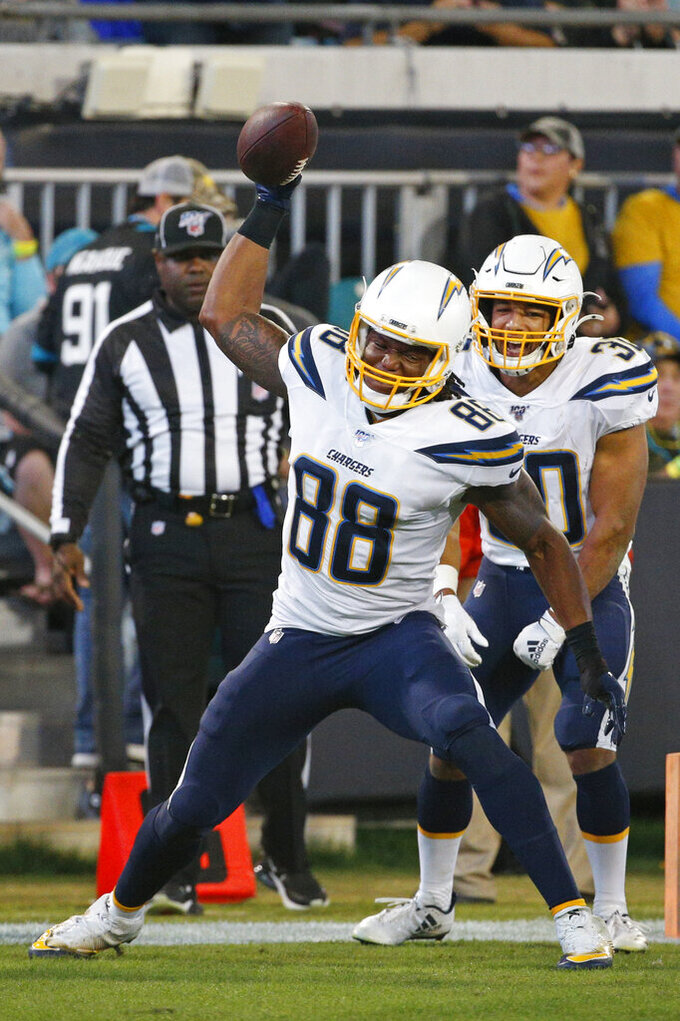 Los Angeles Chargers tight end Virgil Green (88) spikes the ball after scoring a touchdown against the Jacksonville Jaguars during the second half of an NFL football game, Sunday, Dec. 8, 2019, in Jacksonville, Fla. (AP Photo/Stephen B. Morton)

CARSON, Calif. (AP) — The Minnesota Vikings realize they can't stop to take a deep breath in the final three weeks of the regular season — not even at sea level on the sunny West Coast.

With the Green Bay Packers ahead of them in the NFC North and the Los Angeles Rams right on their tails in the wild-card race, the Vikings (9-4) might need to be perfect in their final three games just to make the playoffs.

The next stop on Minnesota's perilous path to the postseason is a suburban soccer stadium hosting its next-to-last NFL game. The Los Angeles Chargers (5-8) have already been eliminated from playoff contention, but they've got more than enough talent and motivation to worry the Vikings in their final road game of the regular season.

“It’s the NFL, so you can’t take no team lightly,” Vikings running back Dalvin Cook said.

The Vikings have won seven of nine with an increasingly impressive offense and a playmaking defense, but they realize the Chargers are a danger not indicated by their record.

Los Angeles' eight losses have all been by seven points or fewer, leaving the Chargers out of the playoff race despite a plus-38 point differential and elite talent on both sides of the ball. The Bolts' late-game execution has doomed them repeatedly, while the Vikings pulled out a pair of narrow victories last month to kick-start their playoff push.

A loss by the Vikings would greatly benefit the Rams, who will be the Chargers' stadium roommates next season. That's not a motivation for the Bolts, who are still fighting for coach Anthony Lynn's stated goal to rally back to .500.

“We want to win for us,” quarterback Philip Rivers said. “Obviously, it’s been tough with every loss by one score. We’re playing for us, but certainly, there’s a lot on the line for them. The Rams are pulling for us as well. It’ll be a heck of a game.”

TRIPPING UP Road games on the West Coast have long been tricky for teams in the Central or Eastern time zones, and the Vikings have been no exception.

After losing 37-30 at Seattle two games ago, they’re 1-6 on the road in the Mountain and Pacific time zones in six seasons under coach Mike Zimmer. Their last such win was at Oakland in 2015. Five of those losses were in night games, so the NFL did the Vikings a favor by recently moving this contest out of prime time and into the late afternoon slot.

Another category that could hinder the Vikings? The natural grass at Dignity Health Sports Park. They’ve won only one of seven games on grass over the last two seasons, at Philadelphia in 2018.

“Good football teams, no matter what comes at them, find a way to still get the job done,” quarterback Kirk Cousins said.

The Chargers haven't played a home game since Nov. 3, and they have just two left in their temporary stadium south of downtown Los Angeles. While the Vikings are likely to have a serious fan turnout, the Bolts are used to that — and they're still grateful to be home for the next two weeks believing they can reset their mentality with a regular schedule.

Minnesota’s Stefon Diggs is fifth in the NFL with an average of 17.8 yards per reception. When he’s targeted on an attempt of 20 or more yards in the air, the passer rating of 139.2 is second best in the league behind only Kansas City tight end Travis Kelce. Diggs has seven catches of 40 or more yards, tied for second in the NFL with Tampa Bay’s Mike Evans and trailing only Mike Williams of the Chargers with eight. His success with Cousins going deep has been a big reason the Vikings have won seven of their last nine games and stayed on track for the playoffs despite the loss of two-time Pro Bowl receiver Adam Thielen to a hamstring injury. Thielen has been limited to 16 snaps over the previous seven games.

“Be able to run routes at a high level, catch the ball and have success down the field is just part of the game that you work at, but I never wanted to be good at one thing. I just wanted to be a good receiver,” Diggs said.

Thielen has practiced on a limited basis this week and could finally be at full strength again on Sunday. After the initial injury on Oct. 20 at Detroit, he had a false start on Nov. 3 at Kansas City that forced him out again in the first quarter, making the Vikings extra cautious about his return. The Vikings have averaged 27 points over their last seven games.

“I’m excited. The only thing you’re worried about is, ‘Hey, we’ve got a good rhythm going, you know?’” Cousins said, smiling. “It does feel different when you have him back. It has a different dynamic, so you just joke with him, ‘Hey, don’t rock the boat too much.’”

Keep an eye on the matchup between Vikings sack machine Danielle Hunter and the Chargers' offensive tackles. While left tackle Russell Okung is usually rock-solid, right tackle Sam Tevi is learning on the job and has given up too many chances to get at the relatively static Rivers. Hunter is tied for fourth in the league with 12 1/2 sacks after becoming the youngest player to reach 50 career sacks last week.