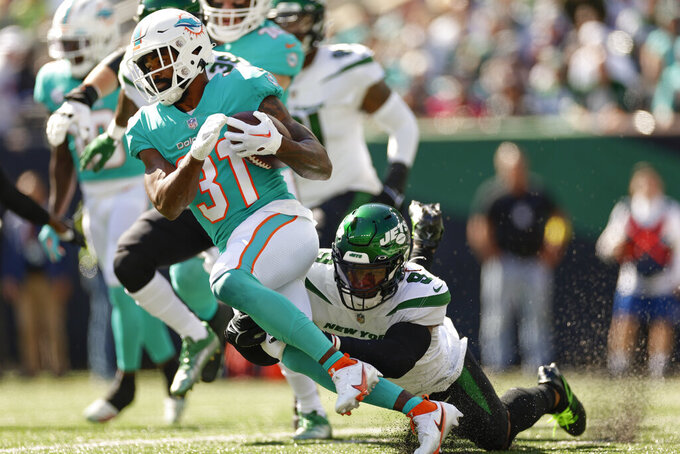 BETTING LINE: Vikings by 3½ according to FanDuel SportsBook

TURNOVER DIFFERENTIAL: Vikings plus-1; Dolphins minus-2

VIKINGS PLAYER TO WATCH: WR Justin Jefferson has 40 catches, the third most after five games in franchise history behind Adam Thielen (47 in 2018) and Cris Carter (41 in 1994). Jefferson has tied Pro Football Hall of Famers Randy Moss and Lance Alworth for the most games (six) with at least 150 receiving yards in a player’s first three NFL seasons.

DOLPHINS PLAYER TO WATCH: RB Raheem Mostert has had double-digit carries in two consecutive games. He rushed for a season-high 113 yards and a touchdown on 18 attempts against the Jets last week and has 75-plus scrimmage yards in three of the past four games. He leads the Dolphins running backs with 260 yards this season.

KEY MATCHUP: WR Justin Jefferson against the Dolphins defense. Jefferson had a career-high 12 catches for 154 yards against the Bears last week and leads the Vikings with 524 yards. The Dolphins are ranked 28th against the pass and have had trouble defending big plays. Miami allowed Jets running back Breece Hall to amass 100 receiving yards with two catches last week. That was after allowing 124 yards and seven receptions by Bengals receiver Tee Higgins the week before.

KEY INJURIES: The Vikings are remarkably healthy for Week 5, but they’ve had a fluke run of rookies get hurt on special teams. Five of their draft picks have missed time, including safety Lewis Cine, who suffered a season-ending broken leg while blocking on a punt return. This week, CB Akayleb Evans was limited in practice Wednesday after entering the concussion protocol in the game against the Bears. WR Jalen Nailor, who missed the Chicago game with a hamstring injury, returned to practice as a full participant. ... Dolphins QB Tua Tagovailoa (concussion) will not play. QB Teddy Bridgewater (concussion protocol) could be medically cleared by Sunday. If so, he will back up Skylar Thompson. WR Tyreek Hill had his foot stepped on against the Jets, but he practiced fully Wednesday. CB Xavien Howard is nursing two groin injuries, and it is unknown whether he will play Sunday. LT Terron Armstead (toe) left the game against the Jets with a lingering toe injury.

SERIES NOTES: The Dolphins have won three of the past four. This will be the Vikings first game in South Florida against the Dolphins since 2014. Dolphins QB Teddy Bridgewater was the rookie starter for the Vikings in the game. He passed for 259 yards, two TDs and one interception in a 37-35 loss.

STATS AND STUFF: The Dolphins have won their past eight games at Hard Rock Stadium. ... This is the first of two straight home games for the Dolphins. ... Miami has only lost to the Vikings at home once in franchise history, in 1976. ... WR Tyreek Hill has only faced the Vikings once in his career. In that game, he had six receptions for 140 yards and a touchdown. ... QB Skylar Thompson is expected to make his first career start Sunday. ... The Dolphins haven’t had an interception since Week 1 against the Patriots. ... WR Jaylen Waddle has at least 65 receiving yards in both home games this season. Waddle has a touchdown catch in two of his past three home games. He has at least 80 receiving yards in each of his past four games against NFC opponents. ... The Vikings are off to their best start since going 5-0 in 2016. ... The Vikings converted 12 third downs against Chicago, the most in the NFL last week and their most in a game since 2009. ... Vikings QB Kirk Cousins has at least one TD pass in 35 straight games, the longest active streak in the NFL.

FANTASY TIP: WR Justin Jefferson is probably the safest pick in this game. He’s always a safe fantasy bet, for that matter, as he leads all NFL receivers in yards with 547.