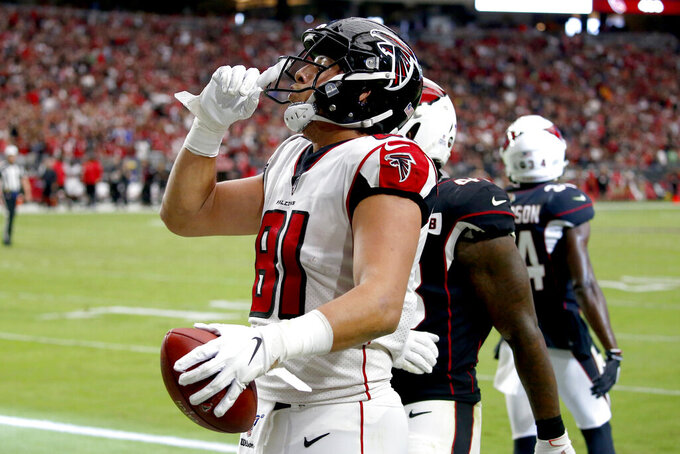 GLENDALE, Ariz. (AP) — The Atlanta Falcons mounted a massive second-half comeback, rallying from 17 down to pull within a point of tying Arizona.

All they needed was an extra point to tie the game and hopefully send it to overtime, possibly pull out a much-needed win.

When Matt Bryant's try sailed wide left with 1:53 left, the Falcons fell flat again, adding another way to lose in a season quickly spiraling away from them.

Of all Atlanta's 2019 missteps, Sunday's 34-33 loss to the Cardinals may hurt the worst — and possibly be the final act of coach Dan Quinn's career with the Falcons.

"You put everything into it and I told the team, knowing you could get your heart broken," Quinn said. "That is was happened today."

The Falcons, who fell to 1-5 for the first time since 2007, arrived in the desert early, heading straight from last Sunday's game in Houston to Phoenix for a week of preparation to face the Cardinals (2-3-1).

The trip was scheduled months ago for what Quinn and his staff hoped would be a bonding experience.

Instead, the Falcons needed to regroup after giving up 53 points and nearly 600 yards of offense in a lopsided road loss to the Texans.

The extra road prep looked like it was going to pay off early against the Cardinals.

Then the Falcons looked like they flew into a desert sandstorm.

Atlanta's defense had no answer for Kyler Murray and the Cardinals, allowing Arizona's rookie quarterback to pick them apart.

Murray hit 16 of 19 passes for 240 yards in the first half and hit Chase Edmonds on a 2-yard TD pass. David Johnson also scored on a 1-yard run to give the Cardinals a 20-10 halftime lead.

The Falcons' fate seemed to be set when Maxx Williams caught a 20-yard TD pass from Murray to put Arizona up 17 early in the third quarter.

Facing a second straight blowout, the Falcons got their flow going again.

Atlanta's defense forced Arizona into three straight three-and-outs and the offense found the rhythm it had been missing since the game's opening drive.

Ryan hit Deonta Freeman on a 7-yard touchdown pass late in the third quarter and Austin Hooper on a 6-yard score in the fourth to tie the game at 27-all.

"We just ran what we've been running all week," said Ridley, who had six catches for 48 yards. "It clicked and we started moving the ball."

Even Arizona went back ahead on Murray's 14-yard touchdown pass to Johnson, the Falcons had an answer.

Working the ball quickly down the field, Ryan led Atlanta on a seven-play, 75-yard drive capped by a 12-yard scoring pass to Freeman.

Thinking the extra point was a foregone conclusion, Cardinals coach Kliff Kingsbury didn't look up; he was too busy setting up how the Cardinals were going to answer after the Falcons tied it.

He should have watched.

"I have gotten a lot of support, but it doesn't take away from the feelings of being dependent on doing my job and coming up short," Bryant said. "It's disappointing for us to fight back the way we fought back and not finish it off."

Arizona still had to secure one more first down to keep the Falcons from getting the ball back, but even then, it would have been a long-shot comeback attempt.

When Murray slipped just past the first-down marker, Atlanta's destiny of yet another loss was sealed.