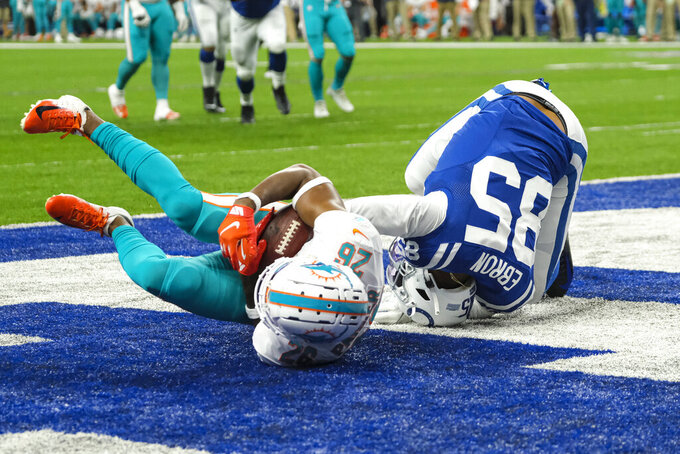 Dolphins defensive back Steven Parker (26) rolls away with the ball after stripping it in the end zone from Indianapolis Colts tight end Eric Ebron (85) during the first half of an NFL football game in Indianapolis, Sunday, Nov. 10, 2019. The play was rule an interception by Parker. (AP Photo/AJ Mast)

INDIANAPOLIS (AP) — Adam Vinatieri has been automatic for most of the previous 23 seasons.

Peyton Manning was once caught on video simply mouthing the word "money" as Vinatieri booted another game-winning field goal. Coach Frank Reich used the same term three weeks ago when Vinatieri made a 51-yard field goal to beat Denver.

But this season has been atypical.

While the NFL's career scoring leader and oldest active player has missed five field goals, his highest single-season total since 2012, the more alarming statistic is Vinatieri going 14 of 20 on extra points. The six misses are double his previous single-season career high while the 70% conversion rate for this season and 25% conversion rate over the past three games are the lowest among the league's 32 teams.

So now, the Colts are dealing with a new round of questions about their kicker.

"We have been committed to him," Reich said after Sunday's 16-12 loss. "But like everybody, I'd say this generally speaking about our roster, we're going to always evaluate, everybody gets measured and everyone is held accountable. From top to bottom, that's always the case, so nothing meant to be read into that, that's just the reality of this business."

Reich went on to say he's not discussed Vinatieri's status with general manager Chris Ballard. That shouldn't be a surprise considering Reich has continually stated his confidence in Vinatieri never has waned.

He reiterated that point Monday before his usual post film session with Ballard.

Sure, there are plenty of explanations as to why the Colts (5-4) have lost back-to-back games. On Sunday, for instance, Miami converted three interceptions into 13 points.

Still, it's hard to ignore the obvious facts.

Vinatieri has missed kicks in all four of Indy's losses. And one week after shanking a potential game-winning field goal in the waning moments, Vinatieri missed an extra point that could have changed the Colts strategy in the closing minutes Sunday.

On Indy's first play after Miami retook a 13-12 lead, Brian Hoyer was picked off for the third time — setting up another field goal to give the Dolphins a four-point lead.

So when the Colts drove to the Miami 16 with less than a minute left, Indy needed a touchdown to take the lead instead of a short field goal to potentially force overtime — normally a near certainty with Vinatieri.

Instead the drive stalled and the questioning about the 46-year-old Vinatieri began.

"Absolutely," center Ryan Kelly said when asked if he still has 100 percent confidence in Vinatieri. "I obviously have trusted him since I was a rookie, and it will never change."

RB Marlon Mack. With starting QB Jacoby Brissett and four-time Pro Bowl receiver T.Y. Hilton out with injuries, Mack shouldered an even bigger burden Sunday. While he continues churning out yards — 74 on 19 carries against Miami — finding holes seems to be getting more difficult.

Offensive line. Indy entered this season with what many called one of the league's top units. Though none of the five starters has missed a game and four have been available for every snap, the line has given up 10 sacks in three weeks and allowed too many negative plays.

Brissett. Since replacing Andrew Luck, Brissett has generally been effective, efficient and mistake-free. Without him, the Colts offense has struggled. Hoyer has four interceptions and two fumbles in less than four halves. On Sunday, the Colts gained 300 yards — nearly one-fifth coming on the final drive which ended with Hoyer's 8-yard completion on fourth-and-10.

Hoyer and TE Eric Ebron. Hoyer was 18 of 39 with 204 yards, one touchdown and three interceptions, all of which led to Miami scores. The first interception came when Ebron failed to cleanly haul in a touchdown pass on Indy's first series. Dolphins cornerback Steven Parker wrestled the ball away in the end zone, sapping the Colts of momentum.

Backup running back Jordan Wilkins left with an injured ankle in the second half and did not return.

Seven. Colts' opponents have scored only seven touchdowns in the past five games. Take away Pittsburgh's 96-yard interception return for a score and Indy's defense has allowed 84 points, or 16.8 per game, during the same stretch against Kansas City, Houston, Denver, the Steelers and Miami.

The Colts cannot afford to keep giving away points off turnovers, dropped passes or missed kicks as they host the Jaguars.