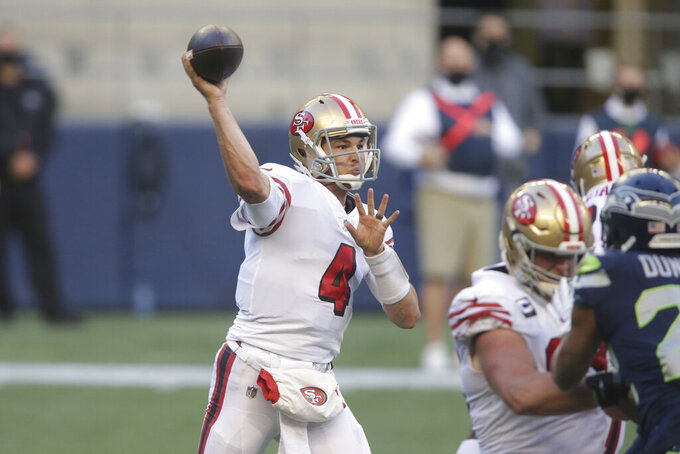 When the teams met again two months later in the NFC title game, the Niners won behind 229 yards rushing and four TDs from Raheem Mostert.

When they face off at Levi’s Stadium for the third time in less than a year Thursday night, the Niners (4-4) will look nothing like that juggernaut that dealt the Packers (5-2) two lopsided losses. A spate of injuries has derailed the defending NFC champions.

“It makes things more of a challenge,” coach Kyle Shanahan said. “We have experience of losing guys in the past where our team knows how to deal with it. Kind of what we’re going through now is a little unprecedented, just I think for us and probably for anybody, but I think our guys take it as a challenge. Yeah, when you lose guys that you depend on and guys that you want out there, there’s a little depressing feeling to it for everybody right when you hear it. But then you’ve got to go play.”

The Niners have been decimated by injuries this season, with Garoppolo and Kittle the latest to go down this week. San Francisco will also be without Mostert, Samuel, Bosa and Richard Sherman among others. Receiver Kendrick Bourne then tested positive for the coronavirus, meaning no player who gained a yard on offense for San Francisco in those two games in which the 49ers outscored the Packers 74-28 will play Thursday.

The Packers are dealing with their own issues, with running backs A.J. Dillon and Jamaal Williams on the COVID-19 list and leading rusher Aaron Jones (calf) a game-time decision.

That will put even more pressure on quarterback Aaron Rodgers to carry the offense.

“I think as a competitor you’re always excited about the challenges,” Rodgers said. “You’d love having your guys in there at full strength, for sure, but there is that fun challenge of going in there without some of those guys and trying to find a way to win.”

Rodgers struggled against the Niners last season. His 3.2 yards per attempt in the regular-season meeting were the lowest in 181 career starts. The Packers then got down 27-0 at halftime in the NFC title game before Rodgers got going a bit in the second half.

“This is probably one of the games they talked about a lot, probably early on in the season or in the offseason just because of the way it went,” Warner said. “I know they’re looking forward to it.”

The Packers may be playing without their top three running backs. Missing Jones is the most damaging.

“We’ll give him up to game time, and then we’ll figure it out,” Packers coach Matt LaFleur said.

Nick Mullens gets another chance at QB for the Niners after an up-and-down performance earlier in the season when Garoppolo first got hurt. Mullens threw for 343 yards and a TD in a win against the Giants in Week 3 before getting pulled after two fourth-quarter turnovers in a loss to Philadelphia the following week. Mullens played well in relief last week with 238 yards passing and two TDs in the fourth quarter at Seattle.

“I know Nick can go out and do that,” Shanahan said. “You guys saw that throughout the game in Seattle, and it’s important that we just build a good game plan around him, all our guys play as well as they can and just let the game come to Nick.”

The Packers gave up 285 yards rushing in that NFC championship game, and their run defense remains a concern. Minnesota’s Dalvin Cook rushed for 163 yards, caught two passes for 63 yards and scored four touchdowns in the Vikings’ 28-22 victory at Green Bay on Sunday.

“Guys just got to do their job,” Packers defensive tackle Kenny Clark said. “That’s just what it comes down to. We’ve all got to just buy into it, do our job, beat blocks and fill in and be where we’re supposed to be. It’s as simple as that.”

Bourne's positive test had ripple effects with rookie receiver Brandon Aiyuk, left tackle Trent Williams and Samuel all placed on the COVID-19 list as “high risk” contacts. That leaves Trent Taylor as the only available wide receiver with a reception this season. Taylor has nine catches for 77 yards.