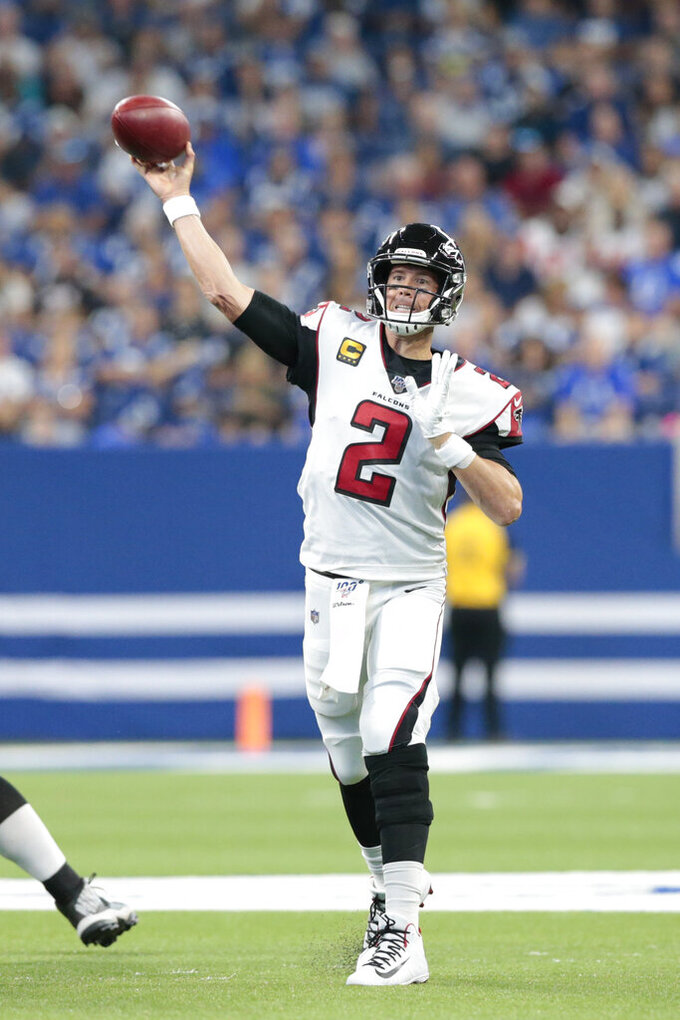 Atlanta Falcons quarterback Matt Ryan (2) throws during the first half of an NFL football game against the Indianapolis Colts, Sunday, Sept. 22, 2019, in Indianapolis. (AP Photo/AJ Mast)

The Falcons need to fix their mistakes and quickly.

The numbers — 16 penalties for 128 yards and minus-1 in the turnover battle — only told part of the story about the 27-24 loss at Indianapolis.

Atlanta (1-2) finished one penalty short of matching the franchise's single-game record, set Nov. 5, 1978 at San Francisco and helped put them in a 17-point halftime deficit that they couldn't overcome.

And yet the bigger concern may be this problem first surfaced during the preseason and shows no sign of abating.

Only eight teams started Week 3 with more penalties than the Falcons and Atlanta nearly doubled its previous total by committing more penalties in one game than 16 teams did in the first two weeks.

Safety Keanu Neal was called for unsportsmanlike conduct in the end zone on the same play he suffered an Achilles tendon injury. It cost the Falcons their final first-half timeout and gave Indy first-and-goal at the Falcons 4 after Neal was carted off the field.

Brissett made the Falcons pay with a touchdown pass to T.Y. Hilton on the next play, giving the Colts a 20-3 lead.

"We've got work to do as we get ready because we've got to get our road mentality right," Quinn said. "This one stinks."

A holding call against left guard James Carpenter on Atlanta's first series knocked the Falcons out of field-goal range, and another scoring chance slipped away when Clayton Geathers picked off Ryan at the Colts 3-yard line in the first half. Ryan now has six interceptions in three games after throwing seven last year — something he promises to correct.

Ryan was only partly to blame, though. In addition to all the extra chances the Falcons' defense gave Indy, Atlanta struggled to get off the field.

The Falcons allowed scoring drives 93, 94 and 75 yards — the last coming after Ryan's second TD pass cut the deficit to 20-17. But when Colts receiver Zach Pascal ran free down the sideline for a 35-yard catch on third-and-1 with 9:24 left, Marlon Mack cashed in with a 4-yard run on the next play for a 27-17 lead.

But with a chance to get the ball back to Ryan for a shot at overtime or to play for the win, the defense again failed.

Atlanta only forced one third down on the final possession and Brissett converted that by rolling out and finding an open Jack Doyle, who turned a short pass into an 11-yard gain. Indy kneeled down twice to seal it.

"I thought they did a good job controlling the ball early to create some first downs, but I think the fouls had something to do with that," Quinn said. "We've got to get that part under control for sure."