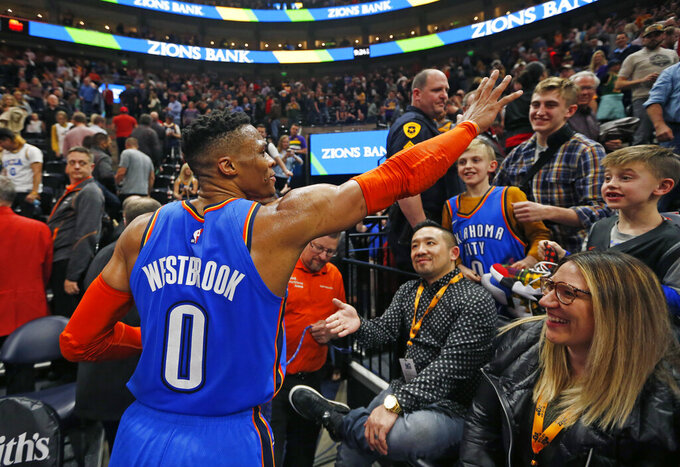 NBA star Russell Westbrook will play in Utah again one day. When he does, a fan who allegedly made racial taunts against him will not be there to watch.

A day after the Oklahoma City Thunder standout directed vulgar comments — which were captured on video and went viral — toward two fans, the Utah Jazz responded by banning a fan from their arena. Westbrook also got support from Jazz star Donovan Mitchell, who said it wasn't the first time a racially motivated event happened at a Jazz game.

"The Utah Jazz will not tolerate fans who act inappropriately," the Jazz said in a statement. "There is no place in our game for personal attacks or disrespect."

Westbrook was fined $25,000 for "directing profanity and threatening language to a fan." In the video, which was posted to Twitter by The Deseret News , Westbrook is seen on the sideline near the Thunder bench saying "I'll (bleep) you up, you and your wife."

The comment, and threatening a woman, is not a good look for the image-conscious NBA — especially since it came from a former Most Valuable Player and one of the game's biggest stars. But Westbrook, who has had multiple angry in-game exchanges with fans, insisted that Monday night's video during a 98-89 Oklahoma City win over the Jazz told only one side of the story. He said he was responding to a racial taunt, and not for the first time in Salt Lake City.

"Every time I come here, a lot of disrespectful things are said," Westbrook said. He added that he has never physically abused a woman and never would.

The man Westbrook was shouting at during the game, identified as Shane Keisel, denied saying anything improper or profane . The Jazz did not name Keisel in their statement announcing the ban, and a phone number for him rang unanswered.

What exactly happened is unclear, but some of Westbrook's peers in the NBA came to his defense Tuesday, saying fans who sit near players in many arenas now feel emboldened to say things that would be described as disrespectful or worse. Mitchell said he will devote some time in the coming months to try to combat racial inequality. The most recent population estimates from the U.S. Census Bureau show that about 2 percent of Utah's population is black, the lowest percentage of any state that has a major pro sports team.

"Racism and hate speech hurts us all, and this is not the first time something like this has happened in our arena," Mitchell said. "The Utah that I have come to love is welcoming and inclusive, and last night's incident is not indicative of our fan base."

Westbrook has had run-ins with fans before — and reacted calmly last month when it appeared he was touched by a child sitting courtside. Others have not been as pleasant, and Denver's Will Barton said he believes fans know they can get a reaction from Westbrook.

"They know he's going to react a little bit or might say something," Barton said. "Now I feel like every time he goes on the road, they're picking at him. I don't know what the league can do, but some of those fans are out of control."

In a social media age, anything can be captured by cameras. TMZ Sports obtained video last week of New York Knicks owner James Dolan at Madison Square Garde n when he heard a fan that he was walking past yell "Sell the team." Dolan told the fan he was rude, asked if he wanted to come to any more games and then told him to "enjoy watching them on TV."

Fans boo. That's expected and even encouraged in arenas. But unlike games in the NFL, NHL and Major League Baseball, fans in the best seats at NBA arenas sit only a few inches from the playing surface, the coaches and the players — with no obstruction between them. On occasion, some coaches are even seen engaging in conversations with fans during games.

Sometimes, the banter is friendly. Often, it is not.

"It's great having fans into their home team, and taunting and that noise level in great arenas, opposing places, is awesome," Miami coach Erik Spoelstra said. "That's what you want. But you don't need to cross the line and say something that you would never say if you were walking up to one of these guys on the street."

One of the league's lowest moments came Nov. 19, 2004, during a game between Indiana and Detroit. Tensions boiled over on the floor after a hard foul led to some pushing and shoving, and then fans became involved — a drink was thrown at the Pacers' bench, prompting Metta World Peace (then known as Ron Artest) to climb into the stands. A melee ensued, and nine players were suspended.

Nothing to that extreme has happened since, though incidents between players and fans are hardly uncommon.

There is a fan code of conduct at all NBA games, including a part that says guests "will enjoy the basketball experience free from disruptive behavior, including foul or abusive language or obscene gestures." Violators are dealt with on a case-by-case basis, and each team handles things its own way. At the Utah game Monday night, some fans were issued warning cards but allowed to return to their seats.

Keisel told Salt Lake City television station KSL that he told Westbrook to "sit down and ice your knees, bro." Westbrook claimed that Keisel said to "get down on my knees like you're used to."

The Thunder did not have any comment other than the statement Westbrook made to reporters after the game.

Westbrook has been upset about fans in Utah before. The Jazz eliminated the Thunder from last season's playoffs, and as Westbrook walked off the floor immediately after that loss, he swiped at a fan who was taping him with his phone. Later that night, Westbrook described fans in Utah as "truly disrespectful."

"Most of the time, the microphone or the camera is on the player," Miami Heat guard Dwyane Wade said. "It goes both ways. A lot of times it's started from the other way and is directed at the player. You want to say, 'Be above it. Be bigger than that.' But a lot of times, if it's personal, it becomes some things that you just cannot deny or you cannot ignore."

Westbrook and the Thunder have finished their season series with the Jazz. Unless the teams meet in the playoffs, the earliest he would play again in Salt Lake City is next October.