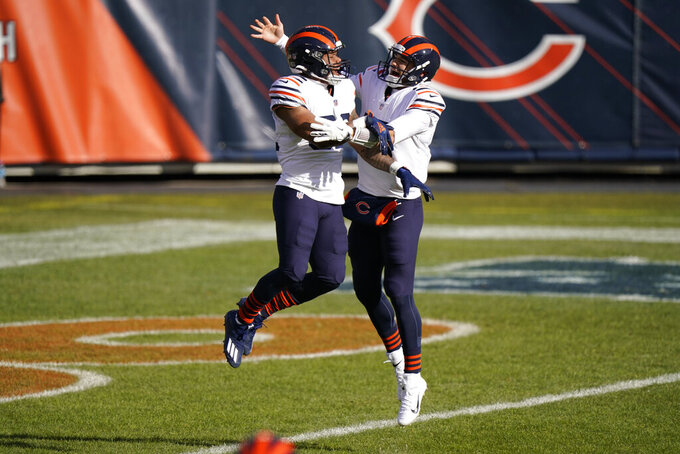 Chicago Bears running back David Montgomery (32) celebrates a touchdown run with quarterback Mitchell Trubisky (10) during the first half of an NFL football game against the Houston Texans, Sunday, Dec. 13, 2020, in Chicago. (AP Photo/Nam Y. Huh)

LAKE FOREST, Ill. (AP) — If the Chicago Bears can get beyond off-field distractions, they think a revised offense with quarterback Mitchell Trubisky can put them in position to beat the Minnesota Vikings on Sunday in a key NFC North game.

Getting past those off-field situations can be a problem, though.

Bears defensive lineman Mario Edwards Jr. continues to practice after being charged with assault over a domestic violence situation from October at the team hotel, while on Wednesday the team had to alter its practice schedule drastically for a second straight week due to a COVID-19 concern.

This COVID-19 situation was different than three other positive or false-positive test situations they've had this season. COVID-19 tests given to a courier never reached the lab.

“The way it was explained to me was a courier issue,” coach Matt Nagy said. “And I’m not sure (of) that company or process but the NFL did confirm to us that it was nothing on our end.

“It is disruptive, it’s disappointing, frustrating, but then again it’s been 2020 and we just got to have that mentality of being able to adjust and move on.”

The Bears couldn’t practice until they retook tests and submitted them again for approval. So they had to move practice back to early evening.

“I think that being able to adapt in any circumstances, not only on the field but off the field this year, has really been huge for everyone,” wide receiver Allen Robinson said.

As for Edwards, the situation with the assault charge reportedly occurred Oct. 17 on the night before the Bears beat the Carolina Panthers in Charlotte and the charges were filed Oct. 20.

The league and team are still studying the situation in which a woman alleges Edwards struck her.

Beyond legal ramifications, it’s possible Edwards violated team or league rules with a guest at the team hotel during a COVID-19 lockdown. The matter became public this week.

“The authorities were involved that evening and we were immediately aware,” Nagy said. “We’ve been in lock-step with the NFL on this the entire way.

“As it relates to the NFL and to our own club protocol regarding the COVID, that was dealt with internally with Mario. That’s where that’s at. It’s something we take very seriously and it’s not something that I’m going to be adding to because of the legal situation.”

When the Bears (6-7) finally did get on the practice field Wednesday, Trubisky and their offense continued working toward a game with Minnesota (6-7) they need in the chase for an NFC wild-card spot.

They’ve scored 36 and 30 points the last two weeks after struggling on offense most of the year. They lost 19-13 to Minnesota in the first game Nov. 16 with Nick Foles at quarterback, without running back David Montgomery and with different starters at four offensive line positions. Now much has changed, especially for Trubisky.

“I kind of just feel like the stuff that I’ve been through this year, and in general, that mentally I don’t feel like I could be fazed right now just where my focus is at,” Trubisky said.

Benched in Week 3, Trubisky returned and lost to Green Bay but said he learned in that game on an interception thrown into double coverage to simply become more conservative in his approach.

“I think it was a learning experience pretty much right away coming back in from the Green Bay game when we wanted to be aggressive downfield and you force one into double coverage and then you look back at it and, OK, we have one guy they have two, that’s not smart football," Trubisky said.

They Bears had been having trouble getting rooke tight end Cole Kmet and Montgomery more involved in the passing attack, and Robinson was their only consistent weapon. Trubisky urged some changes in the offense letting him use his legs more to move around out of the pocket and get it to his playmakers.

“I do feel comfortable,” Trubisky said. “After getting benched and being able to go back in, this is just kind of some of the things I’ve been asking for. I feel like they are strengths of mine and also strengths of this offense.”

Trubisky has a passer rating of 100.2 in games since he returned to start, although they included games with struggling Detroit and Houston.

Nagy said of the change he's seen in Trubisky: “It's real.”

Trubisky has no contract for next year, after his fifth-year contract option was declined in May by the Bears.

“I know exactly what I want, I’m driven, I'm bringing a certain presence and energy to the facility every day that my teammates can feed off of, and I just know what I need to do on a daily basis to help this team,” Trubisky said.