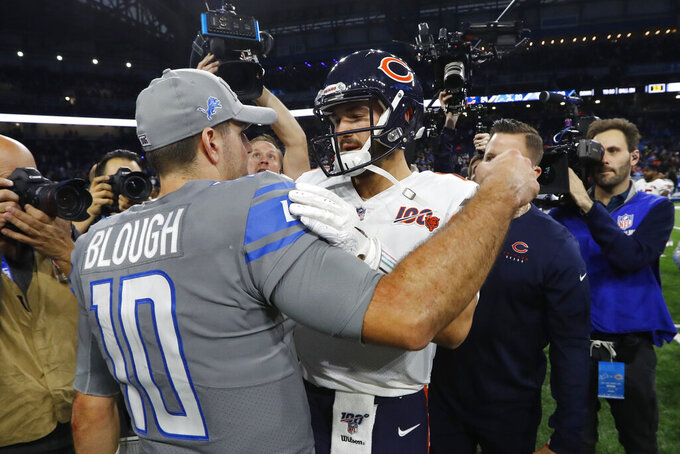 LAKE FOREST, Ill. (AP) — It's been rare in this Chicago Bears season when the play of quarterback Mitchell Trubisky has drawn universal praise.

After Thursday's 24-20 comeback win over the Detroit Lions, Trubisky was in the unaccustomed position of ignoring his success while looking ahead.

"We put ourselves in a position to have another big game next week," Trubisky said.

Considering his role Chicago’s 3-5 start, Trubisky's improvement has been dramatic as the Bears (6-6) have won three of their last four. He is 94 of 145 for 979 yards with eight TDs and four interceptions and a 91.1 passer rating in the last four.

Trubisky did benefit from some lesser competition — all three wins came against last-place teams, including two over Detroit. Trubisky has beaten the Lions three straight times.

"Regardless of who our opponent is, and sometimes players play better versus some opponents, I said it last night, it's been three games, really four games now that Mitch has really stacked some strong games together with decision making," coach Matt Nagy said Friday.

The real test will come for Trubisky as the Bears close the schedule with four games against teams in playoff position, starting with Dallas Thursday night at Soldier Field.

"We know what's ahead of us but we can only control what goes on Thursday night," Nagy said. "And we understand, too, that Dallas is in a very similar situation. And so you know both of us being 6-6, having an opportunity to play at home is going to be fun."

The passing attack has improved in the last three games, and particularly in the second half Thursday. Trubisky went 29 of 38 for a season-high 338 yards against Detroit. The Bears finished with 8.5 yards per pass attempt, a huge improvement over the 5 to 6.5 yards a game they'd been registering.

The Bears need to get better at avoiding silly penalties. They had 10 for 89 yards and seemed in disarray several times Thursday, with too few players on the field once and another time with an illegal formation on a fourth-down gamble. Roquan Smith and Leonard Floyd both drew critical penalties for unnecessary roughness.

Wide receiver Anthony Miller has rebounded from a slow start to his second season after he missed offseason work because of shoulder surgery and most of the preseason with an ankle injury. Miller had career highs of nine receptions and 140 yards Thursday and has 21 catches for 271 yards in the last three games. In the first nine games this season, he had 17 receptions for 218 yards.

Miller was upset with himself against the Lions for a poor first half, then came back big with key catches of 32 and 35 yards on the game-winning drive.

"I think it’s one of the worst halves I've had since I've been playing in the league," Miller said.

Cornerback Prince Amukamara gave up a 75-yard touchdown pass to Marvin Jones Jr. and struggled early in the game with coverage, but then pulled it together in the second half when the Bears limited the Lions to 88 passing yards.

The Bears suffered no major injuries against Detroit. Amukamara left late for a brief period but returned. Nagy said defensive end Akiem Hicks may rejoin practices this week and work toward being reinstated from injured reserve to play against Green Bay in Week 15. Hicks suffered an elbow injury against Oakland in the season's fifth game.

75 — David Montgomery rushed for 75 yards on 16 attempts to provide a complement to the passing attack against Detroit. It was his second-best game as a pro and his best since gaining 135 yards in a loss to the Los Angeles Chargers on Oct. 27.

"You felt like you were getting to second-and-5, second-and-4 more than second-and-9 and second-and-8, and that's a credit to our offensive line," Nagy said.

The Bears (6-6) host Dallas (6-6) Thursday in a battle between teams with fading playoff hopes.