Mixon's big day before bye energizes Bengals for second half 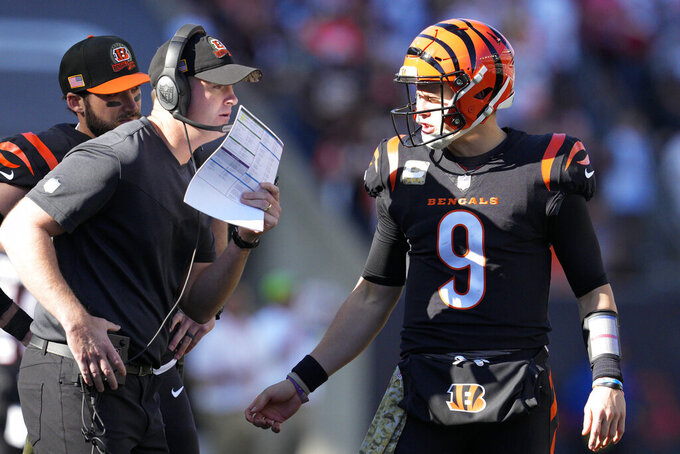 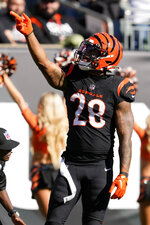 COLUMBUS, Ohio (AP) — Joe Mixon said he was out to show everyone he was “still that dude.”

In making that point, the sixth-year running back might have revived the Cincinnati Bengals' season — as well as own.

He certainly revived their confidence.

Mixon's frustrating lack of production through eight games had reduced his role in the Bengals' offensive plans, with inconsistent line play taking part of that blame. Fans on social media wondered if his best years were behind him.

After rushing for more than 1,200 yards in the run-up to the Super Bowl last year, Mixon was averaging 3.4 yards per carry this seaosn, had only three plays of more than 15 yards and scored just three touchdowns.

Then last week against the Carolina Panthers, Mixon went “crazy,” as teammate Tyler Boyd said, biting off chunks of yards and scoring touchdowns early as the Bengals raced to a 35-0 halftime lead. Mixon averaged 7 yards per carry in rushing for 153 with four touchdowns. He added another 58 receiving yards and a TD catch.

“I knew at some point the dam would break,” Mixon said. “I tried to come out here and prove to myself that I’m still that dude."

His four rushing TDs were the most by an NFL player in a single game this season and his five total TDs were a Bengals single-game franchise record. The performance earned him AFC offensive player of the week honors.

“The best I’ve ever seen — that was it, right there," Boyd said. “But I expect that out of Joe. I know he always has those games each year where he goes crazy, but this is the craziest one yet that I’ve seen.”

The 26-year-old Mixon delivered it at a critical time for the Bengals. Playing without injured star receiver Ja'Marr Chase, Cincinnati was embarrassed the previous Monday night at Cleveland 32-13 and slipped to 4-4, with the Carolina game standing between it and a much-needed week off.

Mixon's performance and the 42-21 rout was a monumental shot for the Bengals' morale. Their 5-4 record is identical to last year's at the nine-game mark. But they were 0-3 against AFC North foes in the first half and open the second half at Pittsburgh (2-6) on Nov. 20. Cincinnati will be trying to avenge a 23-20 overtime loss to the Steelers in Week 1.

“It’s different when Joe Burrow is having a day like that, but when Mixon is running the ball, it kind of creates the dominance of our team on all three phases," said safety Jessie Bates III, who had one of Cincinnati's two interceptions of Carolina's P.J. Walker. “Joe (Mixon) was definitely running with a different type of pop. Like I said, it got going, not just through the offense, but through our defense and special teams, as well.”

That also peeled some of the pressure off Burrow, who passed for 206 yards and the TD to Mixon.

“If we run the ball like we did, it’s tough to stop us,” Burrow said. “We’re getting healthy again; we’ll get some key guys back after the bye and continue to get guys back after that. That’s going to be big for us, to get everyone healthy and ready to go.”

If Cincinnati can continue to get Mixon loose, defenses will have to adjust, which should give Burrow some more room to find his receivers.

“The way that we were balanced, I feel like it’s going to pay huge dividends down the road because we ran the ball effectively, and also we threw the ball," Mixon said. "When Chase comes back ... we start opening the offense even more, because the run game is going, and the pass is on.

“I feel like it’s only going to get crazier.”