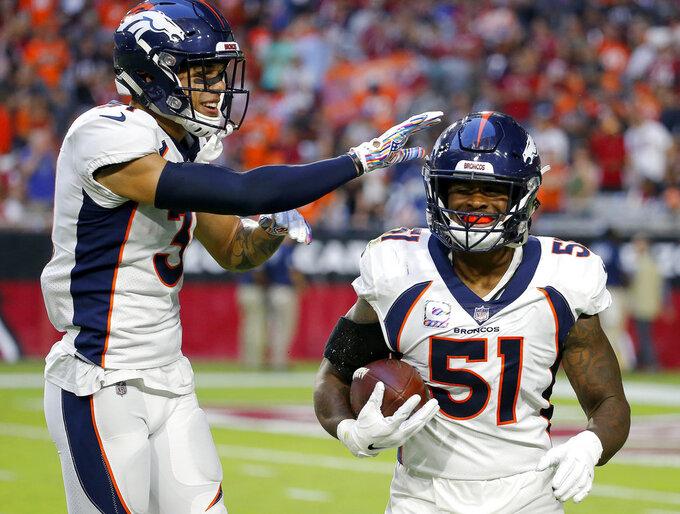 FILE - In this Oct. 18, 2018, file photo, Denver Broncos linebacker Todd Davis (51) celebrates his interception for a touchdown with free safety Justin Simmons during the first half of an NFL football game against the Arizona Cardinals in Glendale, Ariz. On wild-card weekend, many of the league's top defenses will take center stage in hopes that they can get on a run like the one the Broncos went on three years ago to win a Super Bowl title. "I think it's still definitely possible," said Davis, a member of that title-winning team. "I don't feel like it has to be 51-54. It really doesn't. I feel like you can really stop teams if you play close defense, you play tight on receivers, play great in man coverage and you can really stop people." (AP Photo/Rick Scuteri, File)

From Pittsburgh's Steel Curtain in the 1970s to Chicago's Monsters of the Midway in the '80s to Seattle's Legion of Boom more recently, dominant defenses have often been the story of the NFL postseason.

High-powered offenses might generate the highlights, the fantasy points and victories in the regular season. But more often than not the top defenses have managed to hold those dynamic offenses in check when the weather turns colder and the games get more important in the postseason.

Yet, after one of the most prolific offensive regular seasons in NFL history, the question is can defenses still lead the way to a championship?

"I have no idea," said San Francisco cornerback Richard Sherman, a key member of Seattle's 2013 championship defense. "I don't think the league really wants that or cares to have that thing again. They care more about offensive football, so that's what they'll get. To have a special defensive group to play that well for so long would be very difficult to do because of the style of defense and the rules. ... I think it's going to be harder and harder to make the Hall of Fame from defense."

Playing defense in the NFL perhaps has never been harder, with the intimidating hits on receivers and quarterbacks now outlawed, even the most minor downfield contact resulting in penalties, and quarterbacks more accurate and efficient than ever while running the new spread offenses.

This year featured the highest passer rating (92.9), most yards per play (5.6) and second-most points per game (46.7) in NFL history. It seems like playing great defense is almost impossible.

"You can't use it as an excuse because they still let us hit, OK?" said Dallas defensive coordinator Rod Marinelli, an assistant on the 2002 Tampa Bay team that won a Super Bowl behind its defense.

The story of this NFL season has been the offenses, with the highlight being a 54-51 win for the Los Angeles Rams over the Kansas City Chiefs back in November.

That's been part of a season that had first-year starter Patrick Mahomes throwing for 50 TD passes and more than 5,000 yards for Kansas City, Drew Brees set more records at age 39 in New Orleans, Tom Brady maintain his winning ways in his 40s for New England, and Sean McVay's offense tormenting opposing teams all year long for the Rams.

But those teams that feature four of the five most efficient offenses in the league, according to Football Outsiders, and defenses that have been far less consistent will get the opening weekend of the postseason off.

That will provide a bit of a throwback look on wild-card weekend with many of the league's top defenses taking center stage in hopes that they can get on a run like the one the Denver Broncos had three years ago to win a Super Bowl.

"I think it's still definitely possible," said Broncos linebacker Todd Davis, a member of that title-winning team. "I don't feel like it has to be 51-54. It really doesn't. I feel like you can really stop teams if you play close defense, you play tight on receivers, play great in man coverage and you can really stop people."

Many of the teams playing this weekend have shown that ability this season, led by the NFL's top-ranked scoring defense in Chicago. An already-strong unit only got better with the acquisition of elite pass rusher Khalil Mack before the season.

With Mack and Akiem Hicks wreaking havoc up front and Eddie Jackson and Kyle Fuller providing big plays from the secondary, the Bears appear to have the defense best equipped for a long postseason run, starting with Sunday's home game against defending champion Philadelphia.

"Dominant, that's it," Hicks said. "We are aggressive. We like to hit. All the stuff that I was (saying) before the season started, we're everything that we said we were. And hopefully we can get to another level for these playoffs."

The Bears aren't alone. Six of those 10 most efficient defenses are playing this weekend: Baltimore, Houston, the Chargers, Dallas and Indianapolis.

Ball-control offense and dominant defense have been a tried-and-true formula for teams like Baltimore and Seattle, who have combined for three Super Bowl championships and five appearances in the title game this century with that recipe.

The Seahawks still have that capability despite the absence of most of the stalwarts from the Legion of Boom such as Sherman, Earl Thomas, Kam Chancellor, Michael Bennett and Cliff Avril.

But Bobby Wagner remains at middle linebacker, Frank Clark has been an elite pass rusher, and coach Pete Carroll's scheme is still effective after all these years.

"You either believe in something or you don't," Carroll said. "I think just staying the course and knowing we're on to something. Believing in the history. We know what we're capable of doing. We've shown it over a lot of years. You're always adapting, but it's staying what you're true to. I think that's what is happening. We look like a team that we have seen before, and that's powerful."