Monday Night Mannings has been a big success for ESPN 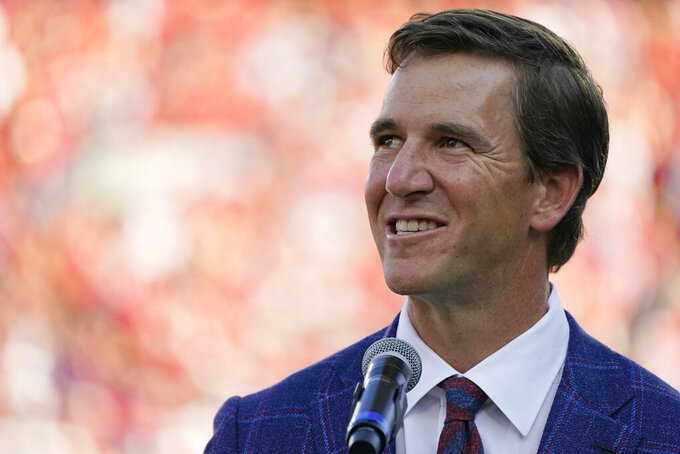 Former Mississippi quarterback Eli Manning addresses the crowd as his No. 10 jersey number is retired as part of the halftime jersey retirement ceremony at an NCAA college football game against LSU in Oxford, Miss., Saturday, Oct. 23, 2021. (AP Photo/Rogelio V. Solis)

ESPN's pursuit of Peyton Manning to be a part of “Monday Night Football” has paid off ... albeit in an unorthodox manner that no one could have predicted.

Not only has the Hall of Fame quarterback made the most of a forum where he doesn't have to worry about jockeying for time in a three-man booth, but he also has brought his brother Eli along for the ride.

The Manningcast — or as ESPN calls it “Monday Night Football with Peyton and Eli” — has drawn rave reviews, along with plenty of viewers. The five Manningcasts on ESPN2 are averaging 1.59 million viewers. The most recent one, the Nov. 1 game between the New York Giants and Kansas City Chiefs, averaged 1.96 million, which is the largest audience ever for an ESPN alternate telecast.

“The interesting thing is they are doing it on their terms,” said Neal Pilson, the former president of CBS Sports who now runs his own sports television consulting company. "Many thought they would be good analysts, but this has gone probably better than some people anticipated.”

The Mannings' foray into broadcasting has been the top story in what has been a strong first half of the season for the NFL on TV. Games are averaging 16.4 million TV and digital viewers, which is the highest average through Week 9 since 2015 and up 9% over last year. It is also a 2% gain over 2019.

It was expected that the audience would increase after last season was played in the middle of the COVID-19 pandemic, with empty stadiums presenting a strange viewing dynamic, and many people’s viewing habits changing. The first half of the season also occurred in the midst of a presidential campaign, when some were watching cable news channels.

“The response from teammates, fans, and the league has been really cool," Eli Manning said. "The show is fun because I am doing what I love. I spent my entire childhood watching football alongside Peyton, so we’ve had some practice at this.

"We’re trying to educate fans when we can, but mostly we’re just trying to entertain them and enjoy the game.”

The Manningcast is a partnership between ESPN and Peyton Manning's Omaha Productions. This is the first of a three-year deal for them to do 10 games per season. It resumes this week when the Los Angeles Rams visit the San Francisco 49ers along with the Nov. 22 game between the New York Giants and Tampa Bay Buccaneers.

While some would like to see it extend to a full season, the current setup benefits all parties. ESPN President Jimmy Pitaro got to achieve his goal of Peyton Manning becoming a part of “Monday Night Football,” while both Mannings get to do it without having to go to the stadiums. Eli does it from his house in New Jersey and Peyton from a facility close to his place in Denver.

Both Mannings have adjusted quickly to the flow of the game on television. After having a hard time getting in and out of breaks during the Sept. 13 opener between Baltimore and Las Vegas, the flow has been much improved.

There was a possibility that there would have been a third person to serve as a host, but the rapport between the two brothers has eliminated any need for that.

“You can’t fake chemistry. Siblings in general have a chemistry that isn’t easily duplicated. That, mixed in with their Hall of Fame football knowledge and knack for entertainment, has been a great recipe,” said Lee Fitting, ESPN’s senior vice president of production. "They’re so authentic and relatable to the fans. You never know when they are coming or what facial expression is coming next.”

The show was a success from the opening week, especially the fourth quarter and overtime segment between Seattle Seahawks quarterback Russell Wilson and the Mannings when they were breaking down the action.

Pilson noted that when there are skilled guests like Wilson joining in the conversation, it makes the flow of the broadcasts much better.

“Most of the time I want to hear more game analysis,” Pilson said. “When you have guests relevant to the game, it works well.”

There have been some rough patches, such as Eli Manning flashing two middle fingers when he was trying to show what Philadelphia fans thought of him during a game against the Cowboys. There was also Marshawn Lynch's profanity-filled segment during Seattle's Oct. 25 game against New Orleans.

“I had to remind Eli that this show is live, so Eli’s learned his lesson,” Peyton Manning said during that game. “Marshawn, I probably should have ... handled him. We apologize for that. Anyway, let’s get back to some football here.”

While many networks are trying to figure out the right opportunity for alternate broadcasts, the “Monday Night Football” space benefits ESPN for a number of reasons. Most viewers flip between the main broadcast on ESPN and the Mannings on ESPN2, and in almost all cases, those channels are next to each other on cable or satellite systems.

When CBS did its kid-focused broadcast during last season's NFL playoff game on Nickelodeon, the channels were far apart.

With five Manning games remaining, Fitting said the focus remains the same as if Peyton and Eli were on the practice field — improving each week.

“We said from the beginning that the show has to evolve each week," Fitting said. "Omaha, and us at ESPN, spend a small period of time reflecting, but only under the lens of how we get better. Much more energy is spent on future shows, and improvement to those shows.”

This version has been corrected to show Fitting is ESPN's Senior Vice President of Production.