Month after rout by Colts, Jets D gets 'do-over' vs. Eagles 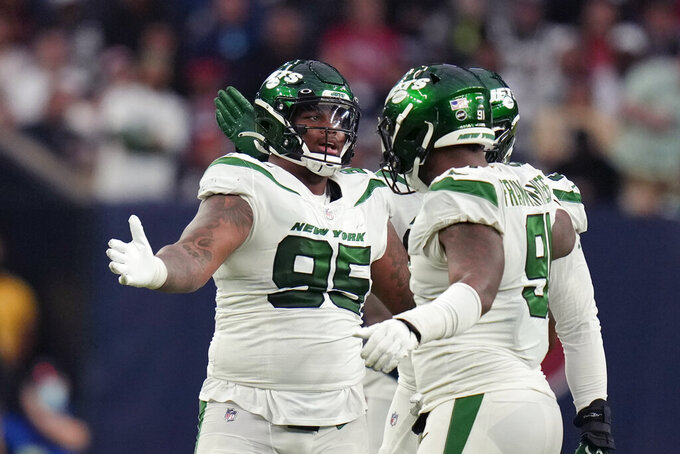 FLORHAM PARK, N.J. (AP) — The New York Jets' defense was at rock bottom a month ago.

Indianapolis had just run through, around and past the Jets in front of a national TV audience, gouging New York for 260 yards rushing. It was a downright pitiful and, as the coaches and players acknowledged, embarrassing performance.

“Ever since that Indy game, just a pit in my stomach, and a pit in our guys' stomachs," defensive coordinator Jeff Ulbrich said. “Collectively, we know that’s not who we are. But we put it on tape, so until we prove otherwise, that is who we are."

That gory film was filled with botched assignments, missed tackles and suspect play calls by the Jets.

“We got exposed that game, and rightfully so,” linebacker C.J. Mosley said. “But I feel like we've taken a lot of steps since that game.”

They get a chance to prove it Sunday against Philadelphia, a team that has run-first tendencies and a head coach in Nick Sirianni who was previously Colts offensive coordinator under Frank Reich.

“Indy is, for all intents and purposes, Philly, from a schematic standpoint,” Ulbrich said. "Same school of coaches, so you've got to imagine they’re not going to go very far to find the blueprint of how to attack us. Which from our standpoint — coaches, players alike — you don’t get very many opportunities to do a do-over, for all intents and purposes.

“This game is that.”

After that 45-30 debacle at Indianapolis on Nov. 4, the Jets followed with a 45-17 loss to Buffalo in which they gave up 489 yards to the Bills — a slight improvement over the 532 the Colts rolled up.

Ranked last or close to it in nearly every major category after that game, New York has actually been one of the NFL’s better defenses in the weeks since. Then again, the Jets really had only one way to go from there.

In their last two games, against Miami and Houston, the Jets have allowed just 3.70 yards per carry — a full yard less than what opponents had been averaging. And after allowing a league-high 19 rushing touchdowns through the first 10 games, New York has given up just one since.

While many fans and some media wondered if the Jets should try to compensate for injuries and inexperience by changing the defensive system, Ulbrich insisted that wasn't how you build long-term success. He saw it work when he was with Atlanta, and same for coach Robert Saleh when he was San Francisco's defensive coordinator.

The players have seen those examples and bought in. They are beginning to see signs it can be effective for them.

“Just saying this is a clear demonstration, illustration of what it should look like within the scheme, I think that helps create the belief, like, OK, that’s guys that have had the experience, the turns, the time on task, the whole thing,” Ulbrich said. “They’re demonstrating at the highest level, so I think that helps it to keep going in times of when it’s not going well. And then fortunately, we’ve had a little bit of success, especially in this past game. That definitely reinforces it.”

Against Houston last Sunday, the Texans were up 14-3 and the Jets were struggling offensively in the second quarter. But New York's defense stiffened, allowing just 45 yards in the second half of a 21-14 win. The Texans' 202 total yards were the fewest the Jets allowed since 2018.

But New York also knows Philadelphia presents a potentially tougher task Sunday. Quarterback Jalen Hurts, who is questionable with an ankle injury, is the catalyst in the run game with a team-leading 695 yards rushing. But the Eagles mix and match their backfield, with Miles Sanders, Boston Scott, Jordan Howard and Kenneth Gainwell all having success on the ground.

So while Mosley doesn't quite agree this is a “do-over” from the Colts game, he knows the Jets will need to do a lot of the things against the Eagles they didn't do in Indianapolis.

“It’s a new team, new opportunity,” Mosley said. “So whatever they present to us, we’ve got to knock it out.”

Ulbrich believes the game against the Colts was “a fluke” and insists the past two weeks were a more accurate depiction of what his defense is — and will be moving forward.

“It’s going to be a fantastic challenge,” Ulbrich said of the Eagles game. "I really look forward to Sunday, I really do because I feel for what (the Jets' defensive players) are going through and the adversity they faced this year and what a great opportunity to just go out there and show the NFL world and themselves: We’re coming.

“We’ve struggled, but we’re coming, and we’re getting better. And we’re not the defense that we’ve been.”

NOTES: Saleh said the Jets are “more optimistic” than last week that WR Corey Davis (groin) will be able to play. Davis was listed as questionable after practicing on a limited basis for the first time since last Wednesday. ... Saleh said DT Sheldon Rankins (knee) was “not looking good” to play and was listed as doubtful. TE Trevon Wesco (ankle) is also doubtful. ... In memory of the four students killed Tuesday in the Oxford High School shootings in Michigan, Saleh wore an Oxford T-shirt during his news conference. The coach grew up about an hour south of Oxford in Dearborn. “An absolute tragedy,” Saleh said. “But through that tragedy, there's a lot of heroes that take place.”