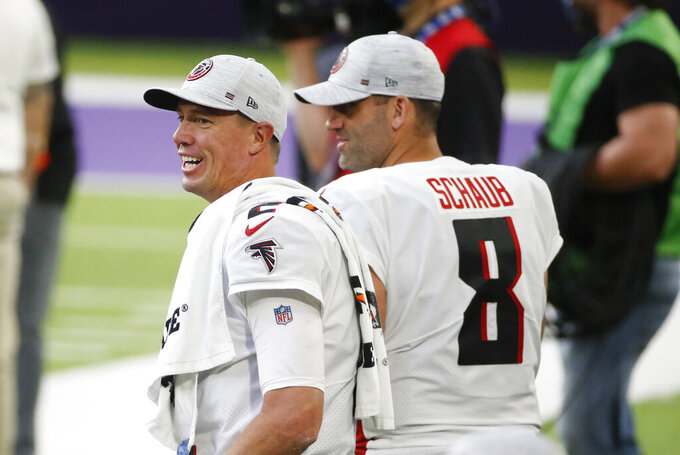 Atlanta Falcons quarterback Matt Ryan, left, laughs on the sideline during the second half of an NFL football game against the Minnesota Vikings, Sunday, Oct. 18, 2020, in Minneapolis. The Falcons won 40-23. (AP Photo/Bruce Kluckhohn)

The ploy, seeking to convince players that nobody’s job is safe, had its intended effect. The Falcons won 40-23 at Minnesota as the team excelled in all three phases.

Deion Jones intercepted Kirk Cousins’ pass over the middle on the first play from scrimmage. It was the first of three picks in the first half, and the offense seized the momentum on Matt Ryan’s 20-yard touchdown pass to Julio Jones.

The Falcons turned the takeaways into 17 points, and the defense chipped in a goal-line stand that followed the team’s only big mistake, a fumble that Brian Hill lost near the end of the first quarter.

Atlanta (1-5) got off to a good start in Morris’ debut because it played complementary football but also because Morris used his communication skills to press home some urgency last week. Morris gathered his defensive leaders together: Deion Jones, Keanu Neal, Grady Jarrett and Ricardo Allen — to tell them the unit had to start running to the ball more actively and hitting with more authority.

“That’s major,” Deion Jones said. “We’ve been there before and to finally capitalize on it is awesome. It goes to show how tough we are that we were able to do it.”

Morris told Ryan, Julio Jones and the leaders on offense that they must keep each other in check.

“I think he challenged us to hold everyone accountable as best we can and then made it real clear for us what our responsibility as an offense is was to go score and get it in the end zone,” Ryan said. “We were better with that today. We need to be better with that as we move forward.”

One week into Morris’ tenure and the Falcons are 1-0. It wasn’t easy after the team facility was shut down last Thursday because of the coronavirus. The Falcons returned to work the next day, and Ryan said it was the best Friday practice they’d had this season.

“It’s awesome when we asked those guys to stand up and they did it,” Morris said. “Today I gave those guys the keys, they took it and ran with it. We were able to get a good win.”

Julio Jones got healthy at just the right time. Dealing with a hamstring injury that sidelined him for all but one half of the previous three games, Jones showed no ill effects while catching eight passes for 137 yards and two TDs. Younghoe Koo hit field goals from 50, 21, 47 and 43 yards. The defense held Minnesota to 3 of 10 on third down. The return units accounted for 83 yards.

The running game still gets stuffed on too many plays. Atlanta accounted for 99 yards rushing, but averaged just 2.7 yards per carry. The offensive line couldn’t consistently penetrate the Vikings’ front seven to free Todd Gurley, Hill and Ito Smith to get to the second level.

Ryan had gone more than 30 consecutive series without throwing a touchdown pass, but he snapped that streak on Atlanta’s first possession when he and Jones connected on a 20-yard score. Ryan also found Calvin Ridley for an 8-yard TD and hooked up with Jones on a 40-yard catch-and-run score that converted a fourth down and put the game out of reach. He finished with a season-best 136.6 passer rating, 371 yards and a fourth TD pass to tight end Hayden Hurst.

Hill’s poor ball security caused a fumble that spurred Minnesota to drive 74 yards down to the 2, whereupon the defense stuffed the Vikings on four consecutive plays.

No significant injuries were reported during the game. Defensive end Takk McKinley was sidelined for the third time in four games and played just five snaps last week. Defensive tackle Marlon Davidson and defensive end John Cominsky are on the reserve/COVID-19 list.

40:07 — the Falcons’ time of possession, which allowed the defense to stay fresh.

Keep up the momentum with another strong week of practice in preparation for Sunday’s home game against Detroit.