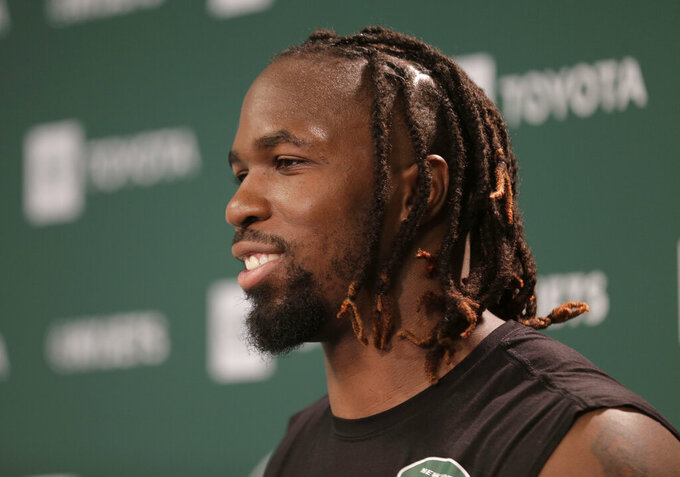 FILE - In this May 23, 2019, file photo, New York Jets' C.J. Mosley speaks to reporters after the NFL football team's practice in Florham Park, N.J. Mosley's resume speaks for itself: He has had at least 100 tackles in every season but 2016, when he missed two games with an injury and finished with 92. Mosley, who turns 27 on June 19, also has nine career interceptions, 8 1/2 sacks and six forced fumbles.(AP Photo/Seth Wenig, File)

Williamson had watched Mosley from the other sideline as an opponent at Kentucky, so he figured his personality off the field might match his big-hitting style on it.

"He just said, 'What's up?' That's it," Williamson recalled with a laugh. "He was so quiet, he didn't say too much. I might've talked to him after a game or something, but yeah, we knew each other, but we never really talked.

All these years later, Williamson is finally finding out what makes Mosley tick — and vice versa — as the two prepare to enter the season as the New York Jets' starting inside linebackers.

"He's a southern guy, I'm a southern guy," Mosley said. "You know, SEC, SEC. You can always match those little things. So far, we're just kind of learning our play style. My main thing with the linebackers — MIKE and WILL — make sure we're talking and we're on the same page."

Mosley was one of the NFL's biggest free-agent signings this offseason, joining the Jets on a five-year, $84 million deal after five seasons with Baltimore. The Ravens desperately wanted to keep him, but acknowledged the Jets' offer was too steep.

There were reports coach Adam Gase wasn't a fan of throwing all that money at Mosley — or the four-year, $52.5 million contract New York gave to running back Le'Veon Bell. Gase, however, has reiterated that he's happy to have both players on his team, and has high expectations for them.

"It doesn't matter," Mosley said. "I'm here now. He pretty much said don't listen to the media. It doesn't really matter what anybody says. It doesn't affect what I do on the field."

Mosley's resume speaks for itself: He has had at least 100 tackles in every season but 2016, when he missed two games with an injury and finished with 92. Mosley, who turns 27 on June 19, also has nine career interceptions, 8 1/2 sacks and six forced fumbles.

More than the numbers, though, it's the intangibles and credibility he instantly brings to Gregg Williams' unit.

"He's just the quarterback of the defense," defensive lineman Leonard Williams said. "He's the voice of the defense. We've been reiterating that whatever he says goes. If sometimes the offense is going too fast and we're having trouble lining up, C.J. will just say: 'OK, run this and we'll all be on the same page. Let's do it.'"

Mosley's arrival has had ripple effects on the Jets. Williamson was previously the middle linebacker and called the defensive signals last season under then-coach Todd Bowles. Now, Williamson will be the WILL (weakside linebacker), a role previously filled by Darron Lee, New York's underperforming 2016 first-round draft pick who was shipped to Kansas City last month for a sixth-rounder.

"He doesn't say too much," Williamson said of Mosley. "He just says the play. We're definitely starting to get used to each other and doing things out there and helping each other out as much as possible."

Mosley is all business on the field, and is perfectly fine letting others, such as safety Jamal Adams, do the yapping.

"I'm more of a lead-by-example guy, so any time he wants to talk or anybody wants to talk, I'm all for it," Mosley said. "But if I feel I need to say something, give a little pep talk, then I'll just say it. As long as we're all communicating with each other, then we're all good."

Adams recalled that during the Pro Bowl in Orlando, Florida, in January, he went up to Mosley and told him it would be great if they could someday line up together in the Jets' defense.

"Yeah, I remember that," Mosley said, smiling. "And when I was going through free agency, he texted me like, 'We'd be that great tandem.' I'm not saying that's what made me come here, but he's definitely a great player."

Adams thought the same of Mosley, of course. And, now, he's beginning to see it on a daily basis.

Added D-lineman Leonard Williams: "He's an old-school linebacker, like he can come downhill and play the run and he can also play the pass. I think the biggest attribute is he's smart."

In other words, Mosley is exactly as advertised.

"There's a lot we've still got to learn," Mosley said. "But the first few weeks, it's been fun to watch and be a part of."

NOTES: Gase canceled the final minicamp practice Thursday and instead brought the players to a Topgolf facility in New Jersey for a team-building activity. ... Mosley has enjoyed having his younger brother Jamey — also a linebacker — in camp after he was signed as an undrafted free agent out of Alabama. "I'm not trying to do too much, extra coaching and all that," C.J. Mosley said. "But if I see something I feel (he) can do a little better as far as technique on special teams or as far as his position, I give him a little bit here and there. We watch film a little bit together, go over some plays. But other than that, I kind of just let him be a rookie. He's got to go through some of his own things on his own."