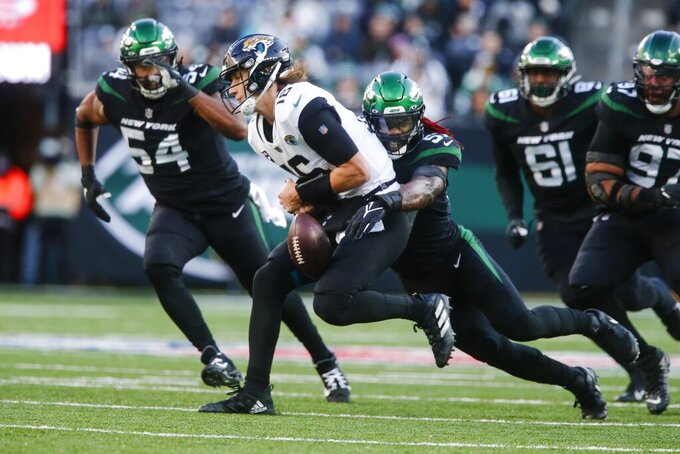 The New York Jets linebacker did all he could to make his story one of redemption.

Tackle after tackle, Mosley re-established himself as one of the game's top playmakers. And one of its ultimate leaders.

“I would say that I can still play this game at a high level,” Mosley said Wednesday. “You know, despite the injury, despite opting out last year, my game is the same, if not better, in my opinion.”

Mosley was voted the winner of the Jets' Curtis Martin MVP award by his teammates, who saw him rehabilitate from the painful groin injury that limited him to just two games in his first season in New York in 2019. They also supported him as he made the difficult decision last season to sit out because of concerns about the coronavirus pandemic.

He came back this season to a new defensive system under coach Robert Saleh and coordinator Jeff Ulbrich. Mosley dropped 20 pounds from his usual playing weight of 250 so he could play faster and be a better fit in the scheme.

“To ask him to adjust the way he’s played linebacker his whole career, he does it and he’s having a heck of a season,” coach Robert Saleh said. "Not because of coaching, but because he’s an unbelievable football player and he works so hard at it.

“Credit to him for everything. He deserves every accolade he gets and I’m really happy he’s here.”

A remade Mosley earned the respect of his coaches and teammates as he returned to dominance. On and off the field.

“It's always a humbling and vulnerable experience when you get to talk in front of a group of men, especially men that look up to you and believe in you," Mosley said. "So it definitely means a lot to me to get the MVP.”

Mosley, who was also voted the team's media good guy award winner by beat reporters, is not the loudest Jets player. He's also not the flashiest.

But he's a leader, and doesn't need to call himself one. Everyone else does that for him because they see it — and admire it.

“Lucky to have come into the league with this guy in my locker room,” rookie quarterback Zach Wilson tweeted of Mosley winning the team MVP award. “Well deserved.”

Mosley was a four-time Pro Bowl selection during his first five NFL years in Baltimore, but is completing perhaps his finest all-around season.

The 29-year-old inside linebacker, recognized as the quarterback of the Jets' defense, has a career-high 155 tackles. That ranks him fifth in the NFL, the most for New York since Jonathan Vilma led the league with 173 in 2005.

He has 10 or more tackles in 10 games this season, and his 14 tackles on third- and fourth-down situations to prevent conversions are the most by a Jets linebacker or defensive lineman since David Harris also had 14 in 2013.

Two years — and just two games — after the Jets signed Mosley to a five-year, $85 million deal during the 2019 offseason, some thought he might end up one of the team's all-time free agent busts.

Mosley changed that off-field narrative with his play on it.

And that's despite the Jets' 4-12 record, a mark that will keep them out of the postseason for the 11th straight season — the longest active playoff drought in the league.

Mosley believes that will change, and he wants to be part of turning things around. He sees a foundation being established and thinks free agents-to-be shouldn't focus on all the losing that has gone in the recent past.

It’s the message of a leader, a team MVP. And one the Jets should include in every sales pitch to players this offseason.

“If you’re scared to come here because you think you might lose, then don’t come,” Mosley said. "If you want to come here to change the culture, change the atmosphere, to prove you can be one of the best players to help this organization, help this team win and get back to a Super Bowl, then by all means necessary, bring everybody with you.

"Bring that same mindset. I mean, that’s all we need. If you come with negativity and doubt, then there’s no point in even coming. If you want to be a part of something special and believe in something special, then the doors are open for you.”