Much blame to spread around for Eagles’ poor offense 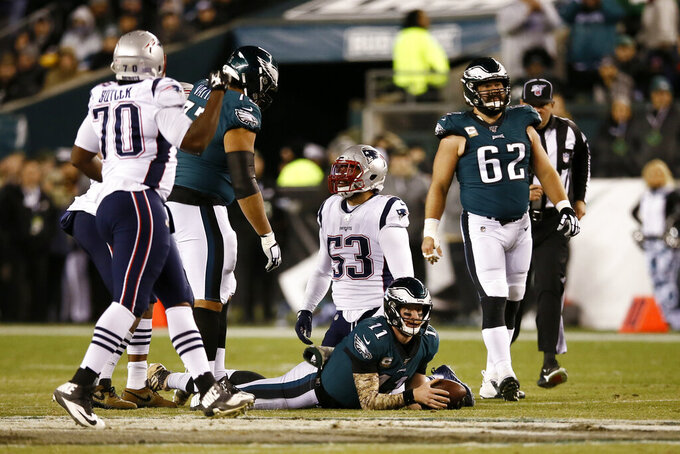 Philadelphia Eagles' Carson Wentz (11) lies on the field after being tackled by New England Patriots' Kyle Van Noy (53) during the first half of an NFL football game, Sunday, Nov. 17, 2019, in Philadelphia. (AP Photo/Michael Perez)

It’s all contributed to an ineffective, inconsistent offense that has plagued the Philadelphia Eagles through 10 games.

Carson Wentz was sacked five times, lost a fumble and completed only half his passes. In Philly, that results in heavy criticism.

"It's not about one guy," coach Doug Pederson said Monday. "It takes 11 on offense. So we have to do better up front in protection, obviously, the backs have to do a better job there as well and then our skill guys have to get open. So there is a combination of a lot of things that we can all take away from this game."

One of Wentz's 20 incompletions was a fourth-down pass from the Patriots 26 that bounced off Nelson Agholor's hands in the final minutes. It would've been an acrobatic catch if Agholor hauled it in but not an impossible grab for a better receiver.

The Eagles were missing their two best receivers — DeSean Jackson and Alshon Jeffery — and leading rusher Jordan Howard. Then All-Pro right tackle Lane Johnson left with a concussion after the touchdown drive. The run game was nonexistent without Johnson paving the way, and all five sacks came after he exited.

Wentz has no reliable target other than tight end Zach Ertz. He also has no deep threat with Jackson out for the season. Agholor has too many costly drops. Jeffery is normally sure-handed but he has slowed down this season. JJ Arcega-Whiteside and Mack Hollins have difficulty getting open. Jordan Matthews just returned for his third stint with the team.

Cornerback Jalen Mills has played well in four games since returning from a foot injury that kept him out nearly a full calendar year. Mills has stabilized a secondary that has improved greatly since he returned along with Ronald Darby and Avonte Maddox.

The entire offensive line suffered after Johnson left the game. It gave up five sacks, allowed 12 hits on Wentz and couldn't open up run lanes. Nine-time Pro Bowl left tackle Jason Peters returned from a knee injury that forced him to miss three games and committed penalties on consecutive drives that led to punts.

Johnson is in concussion protocol, so his status this week is uncertain. Howard and Jeffery are making progress, but it's too early to know when they'll return.

120 — The Eagles are 21-2 under Pederson when they run for at least 120 yards in a game. Sticking with the run is even more important for this offense because the receivers are below average and the passing game is out of sync.

The Eagles host Russell Wilson and the Seattle Seahawks (8-2) on Sunday. Wilson is 3-0 with 6 TD passes, no interceptions and a 104.9 passer rating against Philadelphia.