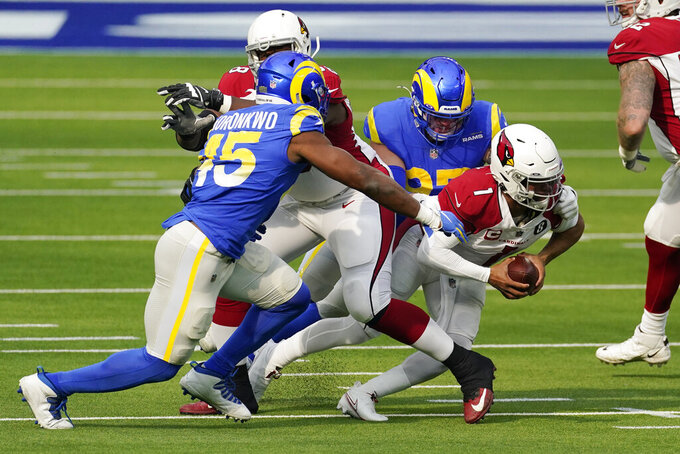 Arizona quarterback Kyler Murray sat out most of the first three quarters with an ankle injury and when he finally returned, wasn't able to rally the Cardinals into the playoffs.

Murray was hurt on the first possession Sunday and didn't return until early in the fourth quarter, when the Cardinals trailed the Los Angeles Rams 18-7.

That's how the game ended after Murray's first drive ended in a blocked field goal and he wasn't able to get the Cards any closer.

Arizona missed the playoffs for the fifth consecutive season. The Rams clinched a wild-card spot.

“Not being able to play in a majority of this game stinks,” Murray said. “I know we are a playoff team, but we hurt ourselves and we held ourselves back.”

Murray injured his right ankle when he was sacked on the Cardinals’ first drive. He went to the locker room and returned to the sideline.

Murray had 14 yards of offense (7 rushing, 7 passing) on the first drive before the Cardinals were forced to punt near midfield. Arizona quickly got it back when Jordan Hicks intercepted John Wolford’s pass at the Rams 20 and returned it 6 yards.

Chris Streveler replaced Murray and led the Cardinals to a touchdown on his first drive. Streveler, who had never thrown a pass in an NFL game, was 2 for 2 for 14 yards giving the Cardinals a 7-0 lead.

Troy Hill intercepted Streveler just before halftime and returned it 84 yards for a touchdown and a 12-7 lead.

Hicks injured his neck shortly after his interception in the first quarter and didn’t return.

At Tampa Bay, star receiver Mike Evans was carted to the locker room with a left knee injury late in the first quarter and did not return to the Buccaneers' 44-27 victory against Atlanta.

Evans was injured one play after a 20-yard reception made him the first player in NFL history to begin a career with seven consecutive 1,000-yard seasons. The 6-foot-5, 231-pound receiver was helped to his feet and tried to walk off with assistance from a trainer. Unable to put his weight on the knee, he finished the trip to the locker room on a cart and was later taken for a MRI.

— Jets wide receiver Denzel Mims was evaluated for a concussion in the second quarter at New England and didn’t return. Left tackle Mekhi Becton limped off the field with an ankle early in the third quarter. Receiver Jeff Smith left with a shoulder injury and fellow receiver Jamison Crowder left in the fourth quarter after a collision.

— Patriots safety Adrian Phillips left in the first quarter with a hip injury and didn’t return. Wide receiver Damiere Byrd was helped off the field in the third quarter with a head injury. Left tackle Justin Herron left with an ankle injury.

— Browns defensive end Olivier Vernon suffered an ankle injury in the fourth quarter. Vernon didn’t put any weight on his leg while being assisted to the medical tent and was then carted to the locker room. Rookie wide receiver/punt returner Donovan Peoples-Jones suffered a concussion late in the first half against Pittsburgh while jumping to make a catch and getting drilled by safety Sean Davis.

— Cowboys wide receiver Noah Brown was ruled out at halftime against the Giants with a back injury and tight end Blake Bell left in the third quarter with a stinger.

— Giants linebacker Blake Martinez left briefly after appearing to injure his left ankle or foot in the third quarter.

— Falcons defensive tackle Grady Jarrett (groin) left in the first half and did not return.

— Seahawks defensive tackle Jarran Reed left in the third quarter because of an abdominal injury.

— Raiders cornerback Trayvon Mullen (shoulder) was hurt in the first half.

— Titans guard Roger Saffold (ankle) was knocked out in the third quarter.

— Bears linebacker Roquan Smith (elbow) was hurt defending a run late in the first quarter and headed to the locker room.

— 49ers defensive end Dion Jordan injured a knee early in the second half and didn’t return.

— Chargers running back Austin Ekeler left after a helmet-to-helmet hit from Chiefs safety Juan Thornhill. Right guard Trai Turner left earlier in the half with a chest injury and safety Alohi Gilman in the fourth quarter with a possible concussion.

— Chiefs linebacker Willie Gay hurt his ankle on their third defensive play. Backup cornerback DeAndre Baker was carted off with a left leg injury early in the second half.