Nagy not throwing in towel as struggling Bears face Lions 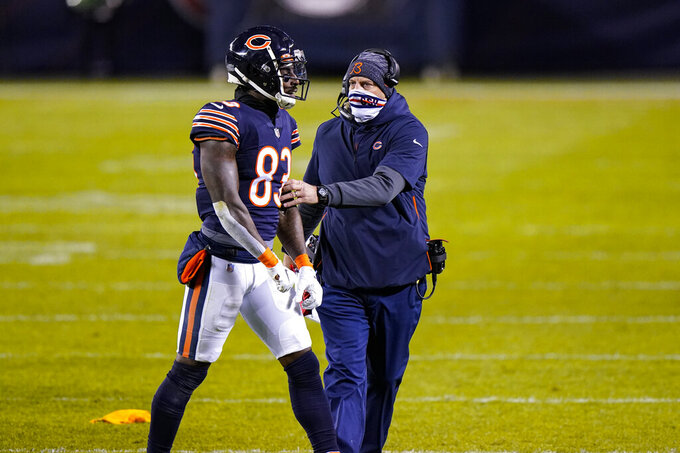 Chicago Bears wide receiver Javon Wims (83) talks with head coach Matt Nagy after being flagged for unnecessary roughness in the second half of an NFL football game against the New Orleans Saints in Chicago, Sunday, Nov. 1, 2020. Wims was ejected from the game. (AP Photo/Nam Y. Huh)

CHICAGO (AP) — Matt Nagy saw it five years ago when he was an assistant on Andy Reid's staff in Kansas City. The Chiefs answered a big slump with a massive turnaround, catapulting them to the playoffs.

Nagy is hoping for something similar in his third season coaching Chicago.

The Bears look to break a five-game losing streak when they host the Detroit Lions in a matchup of struggling teams on Sunday.

“I was on a team in a previous life where we lost five in a row,” Nagy said. “We lost five in a row and we went ahead and won 10 in a row, and I remember the feeling of what it was like, and it was very similar to right now. And so, at that point in time though, we got that one win and, man, it felt different going into that next week for everybody.”

The Chiefs were reeling with five straight losses after opening 2015 with a victory at Houston. But they won their final 10 regular-season games, starting with a victory over Le’Veon Bell and the Pittsburgh Steelers. They kept it going with a 30-0 wild-card romp at Houston before getting knocked out by Tom Brady and the New England Patriots.

The Bears (5-6) are on their worst skid since they dropped five in a row in 2017 — former coach John Fox's final season.

Even when they were 5-1, there were big problems on offense. Lately, a defense that ranked among the top 10 for most of the season hasn't been able to carry them. And last week's blowout by Green Bay was particularly ugly.

Chicago has switched quarterbacks, with Nick Foles replacing Trubisky in a Week 3 comeback at Atlanta. Trubisky returned to the lineup last week with Foles sidelined by a hip and glute injury. In between, Nagy handed play-calling duties to offensive coordinator Bill Lazor, but nothing has really worked. And if the Bears can't beat the Lions (4-7) at Soldier Field, then what?

“I’m just going to be myself," Bevell said. "Like I said, I’m asking the guys to come in with refreshed attitude, ready to work, No. 1, but ready to have a good time and let them play with their hair on fire."

MITCHELL HAS THEIR NUMBER

Trubisky has three touchdown passes in each of his past four meetings with the Lions. That includes a season-opening 27-23 win in which he threw three TDs in the fourth quarter to rally Chicago from 17 points down.

Much has been made of Detroit’s locker room climate under Patricia – and whether it might improve under Bevell, who has been clear he wants his team to enjoy these next few weeks. Matthew Stafford said wins and losses have a way of shaping perceptions of how well liked a coach was.

“I think everybody’s experiences are going to be seen through the lens of kind of wins and losses," the quarterback said. "If you have this lens of a bunch of success and a bunch of wins, everybody has a great look on it, and if it’s the opposite, I think it can turn it a little bit worse than maybe it was. I think the biggest thing is to win. That’s not a head-coach-by-himself thing or a GM-by-himself thing. That’s a team thing.”

Chicago's Khalil Mack looked like he was poised to hit double digits in sacks after getting 6 1-2 through the first eight games. With none in the past three, the three-time All-Pro needs to pick up the pace. He has just nine tackles in that span and no quarterback hits.

Mack had 8 1-2 sacks last season after four straight years in double digits. It was his lowest total since he had four as a rookie with Oakland in 2014.

Bevell will continue to call the offensive plays.

“That’s what I was brought in here for," he said. "I’m comfortable. I think the players are comfortable with the language, with the voice.”

Nagy raised a few eyebrows this week when he challenged the Bears in a way he never had, particularly since much of it was directed at the defense rather than his struggling offense.

Nagy said he is “extremely close” with those players and they were also frustrated. He has “zero concern” his comments would divide the locker room.

“I think that they respect and understand where I’m coming from because they believe the same thing,” Nagy said.