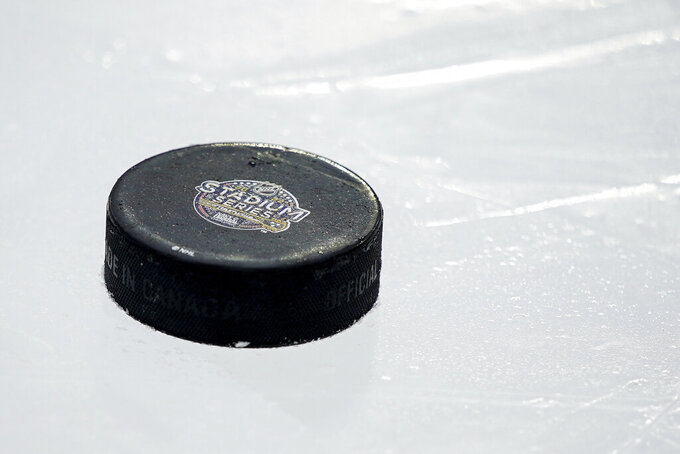 A puck is on the ice during a Nashville Predators hockey practice in preparation for the Navy Federal Credit Union NHL Stadium Series at Nissan Stadium in Nashville, Tenn., Friday, Feb. 25, 2022. (Andrew Nelles/The Tennessean via AP)

NASHVILLE, Tenn. (AP) — The NHL always knew it would hold an outdoor game in Music City. It was just a question of timing.

The Nashville Predators are hosting the reigning Stanley Cup champion Tampa Bay Lightning on Saturday night at Nissan Stadium, home to the NFL's Tennessee Titans, as part of the NHL's Stadium Series. This is the second outdoor game for the Predators, who played in the 2020 Winter Classic in Dallas, and the first for the Lightning.

“We’ve never had this experience and all,” Tampa Bay center Steven Stamkos said. “It’s been a long time coming and probably should have been sooner, but this is a great event. As a player, you watch them all the time.”

Country stars Miranda Lambert and Dierks Bentley will perform during the first intermission, and are among 15 singers scheduled for Saturday's festivities. The fun starts hours before the puck drops with a fan festival in the parking lot.

It just took the NHL time to bring an outdoor game to a city that hosted its All-Star Weekend in 2016 and saw tens of thousands of fans in the streets during the 2017 Stanley Cup Final. Steve Mayer, the NHL's chief content officer, said Nashville had been on the league's radar for years.

“Just the way this city responds to a big event, the way the fans are into the Predators, this was a no brainer,” Mayer said. "It was just a matter of when.”

Picking a date seems almost easy compared to the battle with heavy rain to prepare the ice rink on the field. Approximately 2 1/2 inches fell at the stadium Tuesday alone; more rain Thursday into early Friday led to spot flooding around Nashville.

The NHL learned from the 2020 Winter Classic in Dallas where the Predators played their first outdoor game and weekend rains and temperatures near 70 forced crews to redo both logos and lines. Derek King, the NHL's senior manager for facilities operations, said they learned to change their approach.

So crews started earlier than past games.

They also painted the ice white on atop a half-inch of ice rather than a full inch before adding a 2-inch layer of ice on top. The NHL was able to add more ice Tuesday night even as crews almost around the clock used squeegees to push water off the surface while freezing what they could.

“Considering the weather we’ve had here this week with the rain, it was pretty impressive,” Johansen said.

As a result of the pandemic, the Predators and Lightning now have a bit of rivalry and familiarity that didn't exist before the NHL reconfigured into divisions last season. That put Nashville and Tampa Bay into a revamped Central Division. The Lightning won the season series 6-2 before repeating as Stanley Cup champion.

With both teams back in their respective conferences, this the first game between them this season. Tampa Bay, second in the Atlantic Division in the East, has won three straight and is 7-2-1 over the last 10.

Nashville has won two straight and sits in the first wild-card spot in the West. This is a high-stakes opportunity for the Predators to show what might be possible after not getting past the first round of the playoffs since 2018.

“Whether they are hyped-up games, or highly competitive games, or rivalry games, nationally televised games, whatever it is, if you are going to be a team that’s going to be able to do anything, you have to play your best when the stakes are the highest and the stage is high," Nashville coach John Hynes said.

The roster has undergone some big changes from last season, including longtime goalie Pekka Rinne retiring and Juuse Saros now dominating in net. Nashville retired Rinne's No. 35 jersey Thursday night, and this game will cap a big week of celebrations for the Predators.

“We're professionals,” Johansen said. "We do this every day and when that pucks drops it's got to be all dialed in, and that's the bottom line with that. Lots going on, but we're having lots of fun. We're going to enjoy it.”